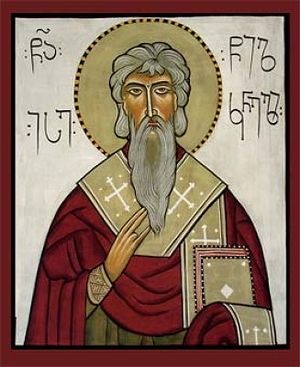 Saint Jesse of Tsilkani arrived in Georgia in the 6th century with the other Syrian fathers and companions of Saint John of Zedazeni.

At the recommendation of Saint John of Zedazeni, Catholicos Evlavios of Kartli consecrated Saint Jesse as bishop of Tsilkani. The holy father traveled throughout his diocese preaching the Holy Gospel. Passing from city to city, from valley to mountain and back, the kind shepherd worked wonders, healed the infirm, cleansed lepers, cast out demons and raised those who were confined to their beds.

Once, with the blessing of his teacher Saint John of Zedazeni, Saint Jesse performed a miracle to strengthen the people in their Faith. He descended to the bank of the Ksani River, followed by Fr. John and a multitude of people. He made the sign of the Cross over the river, touched his staff to the water and commanded: “In the name of our Lord and God Jesus Christ, I command you, river: follow me!” Immediately the river reversed its current and began to flow backwards, following in Saint Jesse’s footsteps right up to Tsilkani Church.

Those living near Mtskheta and Tsilkani who witnessed this miracle glorified the Lord Jesus Christ for bestowing upon one of His children the gift of wonder-working.

When the Lord made known to the saint the day of his repose, he gathered his disciples and church servitors, bade them farewell, blessed them, partook of the Holy Mysteries of Christ, and reposed in peace. His last words were “Lord, into Thy hands I commit my spirit!”

Saint Jesse of Tsilkani is buried in the Tsilkani Church of the Most Holy Theotokos.