Fr. Vasily, an old “Kopeika”… and the help of St. Basil 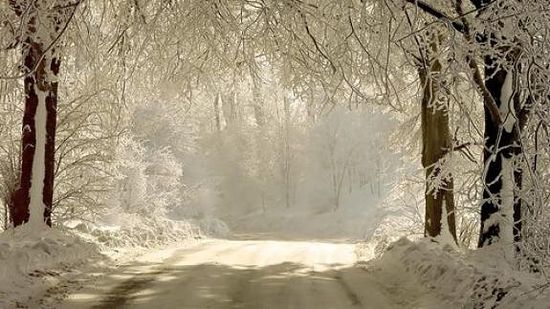 January 14, the commemoration day of St. Basil the Great was Fr. Basil’s name’s day. This day didn’t go well, right from the start. Let’s start with the fact that in his diocese there was a church of St. Basil the Great, about thirty kilometers from the village where he served. Batiushka really wanted to serve the Liturgy there together with the brethren, to confess, and commune on his name’s day. But he really didn’t have time. The Divine Liturgy began at 9, but at seven in the morning there was a funeral. Fr. Basil thought he would serve it within an hour and manage to get to the church feast. But, as always, “man proposes and God disposes.” One person was late, another forgot… In the end they began almost at 8.

At the request of the relatives the burial was in the cemetery. The day was unusually frosty, windy, and cloudy. Disheveled gray clouds wandered along the gray skies. It was even colder because of the strong wind. Fr. Basil was chilled to the bone. The wind tore his phelonion,[1] tangled his stole and wouldn’t allow him to light the censer. The cross and chain of the censer burned his hands with an icy fire.

After the funeral Batiushka looked at his watch: Nine on the dot! “Thirty kilometers,” he thought. “Bad, icy roads. No, I won’t make it… Probably I won’t go.”

But something internal plagued him. The thought of not going and paying respects to his saint seemed to him impossible.

“Matushka, get ready!” he shouted into the telephone, and “sunk” the gas pedal into the floor.

Fr. Basil was in a great hurry. In his old “Kopeika”[2] with worn tires, of course, it was impossible to drive too quickly with the ice—in a few places the road turned into an ice rink. At one point the crystal-fairytale trees covered with frost whirled around the car in a dance. The car suffered. The Lada spun 360 degrees out onto the roadside. Fr. Basil was very confused. Matushka, on her side, only managed to quietly let out a frightened squeal. It was an accident.

They were lucky. After a while, discussing the situation, they thought that St. Basil had saved them on his day, because the car did not hit a tree, but landed in an open space, rolled over, and stood on one side, but after a second again fell on the snow, on all four wheels. The couple didn’t even have time to get scared.

“You… You…” was all Matushka could say. “I told you not to drive!” she cried, bursting into tears.

What else could he say?

Batiushka turned on the ignition, the car skidded a little, then they got back on the road and continued on their way.

Fr. Basil literally flew into the altar. He left the car on the road and didn’t even check if it was locked.

They began the Cherubic Hymn. The priests, standing in the altar, turned and looked at him. Fr. Basil was painfully ashamed under their stares. The dean, standing before the altar, said:

“If you can manage to vest before the Great Entrance, then serve!”

Fr. Basil had never vested so quickly before, but he managed. He managed to confess and commune on his name’s day.

After the meal they returned home, but some kind of bitterness came flooding over him. He suddenly became sorry for his whole life. From such a tense day his heart started pounding hard. It seemed it would leap out of his chest. He thought about how he had imagined his priestly life…

The village was small. Even fewer people came to church. The church was not heated. It was very cold serving in winter, especially during the long evenings. He and Matushka dressed almost like polar explorers. The roof of the church had a leak—it was beyond repair. There weren’t even any candle stands, with bowls of sand standing in their place. The altar Gospel was more reminiscent of a simple red book with a torn and taped spine. Fr. Basil remembered all the insults from people that fill the priestly life…

Little by little he fell into despondency. They arrived home after dark. Fr. Basil hastily ate, read the evening prayers and went to bed early, to bring a quick end to this long day. He felt something very heavy, like a concrete slab had fallen on his chest. He fell into a dark and gloomy state.

Suddenly through his dream Batiushka heard, as if someone was watching him over his shoulders. It was Matushka.

Her face was somehow strange, unusual—at the same time bewildered and unearthly.

“Come on, come on, hurry,” she said, pulling him somewhere.

For some reason he obeyed her, feeling that something unusual was happening. They carefully began to move their bare feet along the floor to the living room.

“Look,” Matushka quietly said, pointing to the “beautiful corner” where their icons were hanging.

At first Fr. Basil didn’t see anything, except for the small golden flame of the shimmering lampada, snatching from the darkness the outlines of the icon’s faces, but then he noticed something unusual. 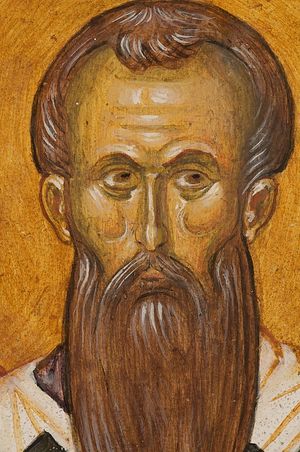 St. Basil the Great. Photo: http://www.gsinai.com/portable-frescoes/
Under the large icon of the Pochaev Mother of God, before which hung a lampada, there stood smaller icons on some shelves. Now they were not visible. Or rather, they should not have been visible! But Fr. Basil’s site was transfixed on a small cardboard icon, on which was depicted the prayer of Christ in the Garden of Gethsemane. The center of the composition was the figure of the Lord, Who laid the palms of His hands on a large rock and prayed, looking to Heaven. Now this figure was completely emanating a blush-silver light from itself. Fr. Basil thought at first that the icon was reflecting some other source of light. He looked around. Nothing of the sort: the source could not have been a reflection from the light of the lampada. It was of a wholly different nature. This light from who knows where shimmered and flickered on other icons too. Soon it began to play small bluish-silvery spots on the walls and ceiling. The light also landed on a small cardboard icon of St. Basil the Great, who intently gazed upon him, reaching, it seemed, the very depths of his soul.

Fr. Basil suddenly felt as if an icy needle had left his heart. He quietly wept, fell to his knees before this miracle and whispered:

“O Lord! Forgive me! Forgive me, a sinner! I know You are with me. You are ALWAYS with me!”

[2] The Lada Kopeika is a Russian-made car. Icons miraculously appear on walls of Omsk church
The miracle occurred in the small chapel of St. Nicholas the Wonderworker with the icons of the Archangels Michael and Gabriel. The outline of the figures on them suddenly appeared on the walls where the icons are hanging. It’s as if their faces left imprints. Some of the outlines are well-defined, and others a bit less clear. But they all have a big white spot in the middle of the image. St. Basil the Great and Christian Philanthropy
John G. Panagiotou
Many things are said and written about the great Cappodocian Father of the 4th century St. Basil the Great of Caesarea. In Basil the Great, we find the consummate theologian, liturgical scholar, ascetic and evangelist of the Faith. Too often, however, one more aspect of Basil is left overlooked and that is Basil as the first great Christian philanthropist. Sermon on the Feast of the Three Hierarchs
Metropolitan Hilarion (Alfeyev)

Sermon on the Feast of the Three Hierarchs
Metropolitan Hilarion (Alfeyev)
There is much in common among the three hierarchs and great ecumenical teachers whom we commemorate today: Saints Basil the Great, Gregory the Theologian and John Chrysostom. All three lived in a time when the Christian Church, after almost three centuries of persecution, received freedom and was flourishing throughout the Byzantine ‘oikoumene’. All the three were involved in contesting contemporary heresies. All the three combined serving the Church in episcopal rank with literary activity, and it is precisely their literary legacy which secured for them the paramount place that they occupy in Christian Tradition. All the three were victims of ecclesiastical intrigues. Their posthumous glory, however, exceeded any expectations their contemporaries might have had, and their significance for the entire Christian Church in East and West cannot be overestimated.
Comments
×