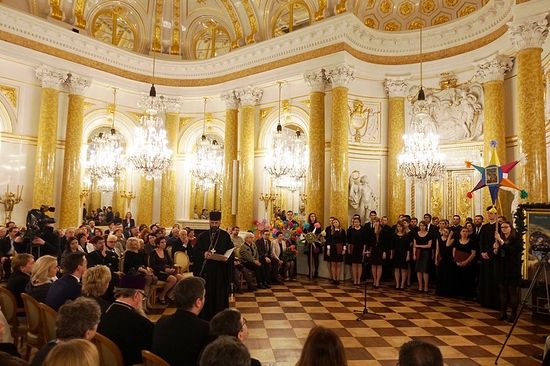 A charity concert of Christmas carols was held January 27 in the Royal Castle in Warsaw to benefit children in Syria. The event, initiated by the “True to the Tradition of Generations” association in cooperation with the St. John of Climacus parish in Wola, was the latest in an ongoing string of charity events, reports the site of the Polish Orthodox Church.

The hall was filled to the brim. Several honored guests were in attendance, including His Beatitude, Metropolitan Sawa of Warsaw and All Poland, as well as representatives of the diplomatic corps, local governments and educational institutions.

The evening began with introductory remarks from Fr. Adam Misijuk, explaining the evening’s purpose of benefiting Syrian children who are suffering from the ongoing war in their land. He mentioned that upon hearing of the evening’s concert, representatives of the Antiochian Orthodox Patriarchate wrote: “It touches our hearts to know that the Orthodox Church in Poland prays for and thinks about how to help Syrians.”

The concert then began, continuing with more than two hours of rousing carols from various family and parish choirs, presented in a variety of musical styles and Slavic languages. Loud applause accompanied every piece, as the audience was moved by the magnificent singing and overall message of faith in Almighty God.

Following the last carol, the organizers of the concert congratulated the representatives of the Serbian embassy present as well as His Beatitude Sawa on his name’s day—the day of the great Serbian enlightener and first archbishop St. Sava I.

The evening finally concluded with a Nativity hymn composed by St. Ephraim the Syrian being sung in Arabic and a joint prayer for Syria and the wellbeing of all those suffering there. Orthodox church in Oklahoma City considers joining group to aid Christians persecuted in the Middle East
"People began to hear of people beheaded and executed, girls carried off and raped, people being turned out of their homes, merely for their faith in Jesus Christ," he said. "My parishioners began to say, 'What can we do?' ”