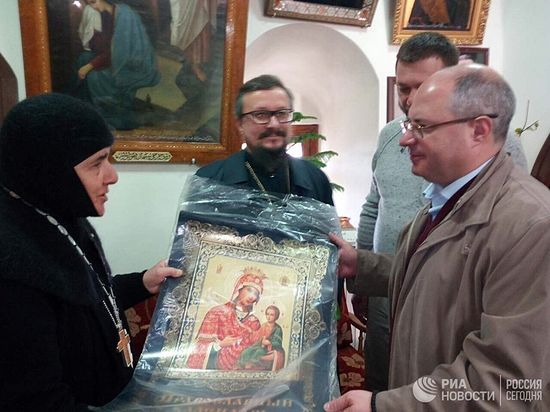 A delegation of Russian State Duma deputies has given humanitarian aid to a Syrian orphanage, according to a press release from Deputy Sergei Gavrilov. The orphanage is located at the Saidnaya Mother of God Monastery, founded in the mid-sixth century by Emperor St. Justinian.

The deputies also met the children and visited a Christian school, reports RIA-Novosti.

“Clothes, medicine, and basic necessities are gathered by believers in Russia and regularly transferred to Syria, with the help of public organizations such as the veterans’ organization ‘Combat Brotherhood.’ Being here, you understand how important the brotherly Christian help is that Russia gives the Syrian people. The role of Russian and Syrian non-profit organizations in restoring the post-war country, in building a peaceful civil society cannot be overestimated. They were and are on the front lines,” Gavrilov said.

The Russian parliamentarians gave gifts to the children and thanked the monastery for its acts of mercy. Doctors also accompanied the delegation to provide necessary medical assistance to the children of the orphanage. Russian Orthodox Church will actively participate in restoring Syrian churches
“Of course we will take part in the restoration of churches, but first of all we must restore peace in the country,” Met. Hilarion (Alfeyev) said on Tuesday in a meeting with students of the Moscow State Linguistic University.
Comments
×