Samoa wants to declare itself a Christian nation 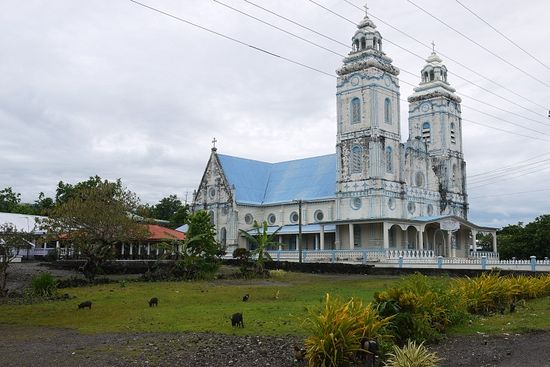 The tiny island of Samoa, 2680 miles east of Australia in the Pacific Ocean, is looking to officially declare itself a Christian nation. Although the cover and preamble of the nation’s constitution already reference Christianity, the government wants to reference the faith in the body itself, reports CBN News.

“The phrase ‘Samoa is founded on God’ will no longer be used. Instead, under the Constitution, it will be, ‘Samoa is a Christian nation founded on God the Father, the Son and the Holy Spirit,’” said Prime Minister Tuilaepa Sa'ilele Malielegaoi. “Every time we say that Samoa is founded on God because it is in within our Constitution, God must've had a good laugh and thought that we have been fooling him,” he said. “And it has been more than 50 years that we have been fooling God, because this is not in the body of our Constitution.”

The proposed amendment has found widespread support in the Samoan parliament.

Some are concerned that such a measure will lead to unequal rights for citizens of other religions, though politicians assure it is intended to do no such thing. According to the prime minister, the goal of the proposed amendment is to prevent religious wars that have erupted in other nations, especially in the Middle East and Africa, but not to block non-Christians from entering the nation.

Politicians also hope that enshrining Christianity in the constitution will help to defend the country against the destabilizing force of liberal pressure from other countries. Homily: Faith Without Works Is Dead
Rev. Gregory Jensen
And yet, in the moment, it can be incredibly hard to remember all of this. As much as I want to abandon myself to the divine providence, to trust in God and His great love and mercy for me, the suffering of the present moment seems to defeat me. I might not curse God but I often do wonder why His plan seems to require my pain. Do We Believe in God?
Fr. Stephen Freeman

Do We Believe in God?
Fr. Stephen Freeman
As a young priest, I fancied myself to be a “problem solver.” A good parish, I thought, was a happy parish. Conflict and crisis were things to be managed. I even took a number of courses in seminary that were focused on “management.” And this, I believe, was the secular option, the breeding ground of despair and unbelief. God’s Light or Dark Apostasy
Orthodox Christian Prison Ministry
Let us consider the gift that we ourselves have received in Christ our God. We know the One whom Isaiah foresaw, the true Light of the world. Like Simeon, “we have seen that true light . . . we have found the true faith . . . for He hath saved us!”
Comments