42 Martyrs of Ammoria in Phrygia 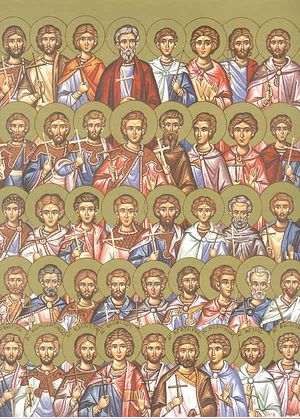 Photo: Days.Pravoslavie.Ru
The Holy 42 Martyrs of Ammoria: Constantine, Aetius (Aetitus), Theophilus, Theodore, Melissenus, Callistus, Basoes and the others with them. During a war between the Byzantine Emperor Theophilus (829-842) and the Saracens, the Saracens managed to besiege the city of Ammoria (in Galicia in Asia Minor). As a result of treason on the part of the military commander Baditses, Ammoria fell, and forty-two of its generals were taken captive and sent off to Syria.

During the seven years of their imprisonment they tried in vain to persuade the captives to renounce Christianity and accept Islam. The captives stubbornly resisted all their seductive offers and bravely held out against terrible threats. After many torments that failed to break the spirit of the Christian soldiers, they condemned them to death, hoping to shake the determination of the saints before executing them. The martyrs remained steadfast, saying that the Old Testament Prophets bore witness to Christ, while Mohammed called himself a prophet without any other witnesses to support his claim.

They said to the soldier Theodore, “We know that you forsook the priestly office, became a soldier and shed blood in battle. You can have no hope in Christ, Whom you abandoned voluntarily, so accept Mohammed.” But the martyr replied, “You do not speak truthfully when you say that I abandoned Christ. Moreover, I left the priesthood because of my own unworthiness. Therefore, I must shed my blood for the sake of Christ, so that He might forgive the sins that I have committed against Him.”

The executioners took each one separately and led him off to be beheaded, then threw the bodies into the River Euphrates. In the service to them, these holy passion-bearers are glorified as: the “All-Blessed” Theodore, the “Unconquered” Callistus, the “Valliant” Constantine, the “Wondrous” Theophilus and “the Most Strong” Basoes.


The betrayer Baditses did not escape his shameful fate. The enemy knew that it is impossible to trust a traitor, and so they killed him.

Your forty-two holy martyrs, O Lord, / through their sufferings have received incorruptible crowns from You, our God. / For having Your strength, they laid low their adversaries, / and shattered the powerless boldness of demons. / Through their intercessions, save our souls!

Forty-two holy martyrs of Ammoria, / you contended for the sake of Christ on earth; / you were revealed as crown-bearing martyrs, / and have been received into the life of the joy of heaven. / Since you overthrew all the wiles of the enemy / by your sufferings and the blood of your wounds, / you continually send down from on high remission of sins to those who praise you.