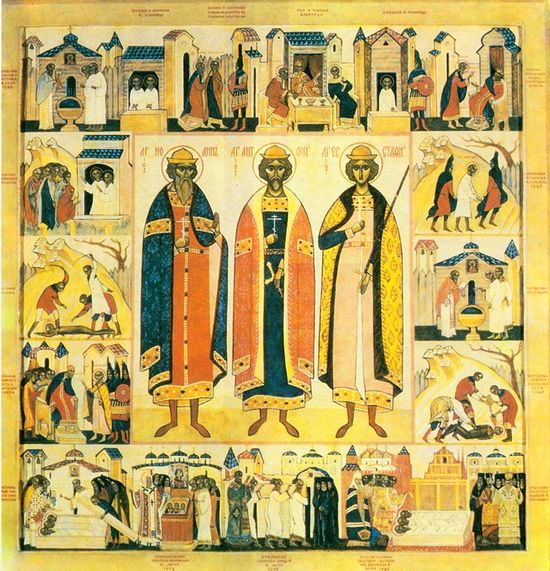 The Holy Martyrs Anthony, John, and Eustathius were brothers who suffered for Christ under the Lithuanian Great Prince Olgerd (1345-1377). The prince was married to the Orthodox princess Maria Yaroslavna (+ 1346). He was baptized and during his wife’s lifetime he allowed the preaching of Christianity. Two brothers, Nezhilo and Kumets, received holy Baptism from the priest Nestor, and they received the names Anthony and John. And at the request of Maria Yaroslavna an Orthodox church was built at Vilnius (Vilna).

After the death of his spouse, Prince Olgerd began to support the pagan priests of the fire-worshippers, who started a persecution against Christians. Saints John and Anthony endeavored not to flaunt their Christianity, but they did not observe pagan customs. They did not cut their hair as the pagans did, and on fastdays they did not eat forbidden foods.

The prince soon became suspicious of the brothers, so he interrogated them and they confessed themselves Christians. Then he demanded that they eat meat (it was a fast day). The holy brothers refused, and the prince locked them up in prison. The brothers spent an entire year behind bars. John took fright at the impending tortures and declared that he would obey all the demands of the Great Prince. The delighted Olgerd released the brothers and brought them to himself.

But Anthony did not betray Christ. When he refused to eat meat on a fast day, the prince again locked him up in prison and subjected him to brutal tortures. The other brother remained free, but both Christians and pagans regarded him as a traitor and would not associate with him.

Repenting of his sin, John went to the priest Nestor and entreated him to ask his brother to forgive him. “When he openly confesses Christ, we will be reconciled,” Anthony replied. Once, while serving the prince at the bath, Saint John spoke privately with him about his reconciliation with the Church. Olgerd did not display any anger and said that he could believe in Christ, but must conduct himself like all the pagans. Then Saint John confessed himself a Christian in the presence of numerous courtiers. They beat him fiercely with rods and sent him to his brother in prison. The martyrs met with joy, and received the Holy Mysteries that same day.

Many people went to the prison to see the new confessor. The brothers converted many to Christ by their preaching. The prison was transformed into a Christian school. The frightened pagan priests demanded the execution of the brothers, but they did not fear death.

On the morning of April 14, 1347 the Martyr Anthony was hanged on a tree after receiving the Holy Mysteries. This oak, which the pagans considered sacred, became truly sacred for Orthodox Christians.

The pagan priests who hoped that Christian preaching would stop with the death of Saint Anthony, were disappointed. A multitude of the people gathered before the walls of the prison where Saint John was being held. On April 24, 1347 they strangled him and hanged his dead body upon the same oak. The venerable bodies of both martyrs were buried by Christians in the church of Saint Nicholas the Wonderworker.

A third sufferer for Christ was their relative Kruglets. At Baptism the priest Nestor named him Eustathius. Kruglets stood out because of his comeliness, valor and bravery, but even more because of his mind and virtue of soul. A favorite of Olgerd, he could count on a very promising future. However, he also refused to eat meat at the festal table. Saint Eustathius openly declared that he was a Christian and would not eat meat because of the Nativity Fast.

They began to beat him with iron rods, but the youth did not make a sound. The prince tried refining the torture. Olgerd gave orders to strip the martyr naked, take him out on the street and to pour icy water in his mouth. But this did not break his spirit. Then they broke his ankle bones, and ripped the hair and skin from his head, and cut off his ears and nose. Saint Eustathius endured the torments with such gladness and courage, that the very torturers themselves were astounded by the divine power which strengthened him. The martyr Eustathius was sentenced to death and hanged on the same oak where Saints John and Anthony received a martyr’s death (December 13, 1347).

For three days no one was permitted to take down the body of the martyr, and a column of cloud protected it from birds and beasts of prey. A church was later built on the hill where the holy martyrs suffered. The trinity of venerable passion bearers glorified the true God worshipped in the Holy Trinity, Father and Son and Holy Spirit. The church was dedicated to the Most Holy Trinity. The altar table was built on the stump of the sacred oak on which the martyrs died.

Soon their relics were found to be incorrupt. In 1364 Patriarch Philotheus of Constantinople (1354-1355, 1364-1376) sent a cross with the relics of the holy martyrs to Saint Sergius of Radonezh (September 25). The Church established the celebration of all three martyrs on April 14.

The holy martyrs were of immense significance for all the Western frontier. Vilnius’s monastery of the Holy Trinity, where the holy relics are kept, became a stronghold of Orthodoxy on this frontier. In 1915 during the invasion of the Germans, these relics were taken to Moscow.

The relics of the holy passion-bearers were returned to the Vilnius Holy Spirit monastery in 1946. The commemoration of their return (July 13) is solemnly observed at the monastery each year.

You who have rejected earthly honor and glory, / Valiant and honorable combatants, / You firmly and courageously suffered torments for the faith, / You have died for the life of all for the Master. / Therefore Christ also gloriously encircles you with a cloud column from heaven / And honors and crowns you with crowns from the throne of glory: / Standing before Him with the angels, pray to save our souls.

Released from the fatherly delusions O Saints, you were led to Christ: / By the diligence of all your souls you put human cleverness to death. / And so attaining the victory of true honor, / Unceasingly pray to our Master for us all.