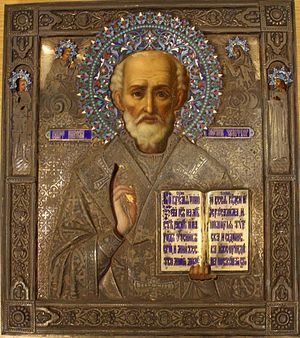 Photo: gtuarchives.org
Metropolitan Hilarion (Alfeyev), head of the Moscow Patriarchate’s Department for External Church Relations, has related a story of miraculous help from St. Nicholas in his life, reports Interfax-Religion.

“It was in Lithuania,” he said, speaking on the “Church and the World” program on TV station Russia-24. “I was a young priest, with an inexperienced driver behind the wheel, and the car drove into a band of fog,” the metropolitan continued.

“I heard banging sounds (as it turns out, the car had fallen off a cliff edge). Arriving at the scene of the accident, the police stated that surviving such a fall was impossible,” making it clear that they had been saved by Divine intervention. “As we were falling, I distinctly felt that St. Nicholas was present there,” the Volokolamsk prelate recalled. “It wasn’t a vision, but I clearly felt it,” he continued.

A piece of the relics of St. Nicholas the Wonderworker were ceremoniously greeted in Moscow yesterday by the ringing of church bells throughout the capital, and by His Holiness Patriarch Kirill and thousands of other clergy and faithful at Christ the Savior Cathedral. The relic will remain in Christ the Savior from May 21 to July 12, and will then be taken to the St. Alexander Nevsy Lavra in St. Petersburg from July 13 to 28. Moscow to greet relics of St. Nicholas today with ringing of church bells throughout city

Moscow to greet relics of St. Nicholas today with ringing of church bells throughout city
All of the churches of the capital will ring their bells beginning at 6:00 PM to herald the great event in a display of the people's deep love for St. Nicholas. Ringing will begin with the Kremlin’s rarely used Ivan the Great bell tower. A Miracle of St. Nicholas
Deacon Vladimir Vasilik
The weather forecasts were good, and nothing indicated any trouble. Just the same, on the horizon there appeared at first a large dark cloud, which started growing rapidly. A sharp wind blew, which grew into a strong squall. A storm began. Huge waves started beating against the small ship.The ship was tossed from side to side. Water flowed into the machinery area. The ship was on the verge of stopping, and that would fatal for all.
Comments
×