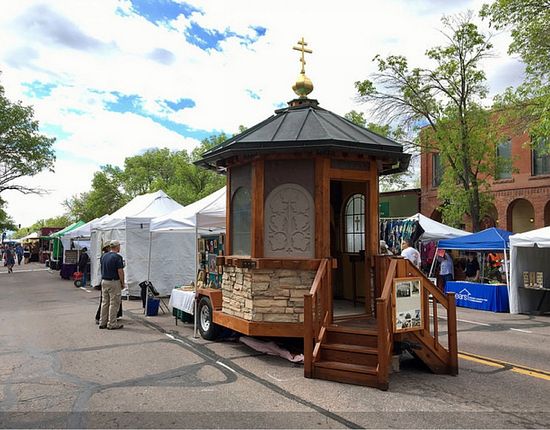 A thriving Colorado parish has found a way to introduce and make the Orthodox Church accessible to even more people, who might otherwise never have any contact with the ancient, Orthodox faith. Holy Theophany Church in Colorado Spring’s new mobile chapel made its public debut over Memorial Day weekend at the local street fair, reports the site of the OCA Diocese of the West.

The story of the chapel began when parish rector Fr. Anthony Karbo spotted a mobile coffee kiosk for sale on the side of the highway. Its eight sides and construction from stone and timber with a copper roof reminded him of roadside chapels he had seen in Greece, and he began to envision a higher calling for the little kiosk. With the help of local artists from Greer Studios, the tiny coffee shop was transfigured into an Orthodox chapel on wheels.

The idea “to be present at public gatherings where Orthodoxy might be an exotic mystery to most passersby” came to fruition at the “Territory Days” street fair, which saw many curious guests attracted by the glistening gold dome. Priests and parishioners were on hand to interact with the people and answer their questions. Children and adults alike entered the chapel, some lighting candles and even venerating the icons. There were also several display tables outside the chapel, with icons, censers and incense, and prayer ropes. 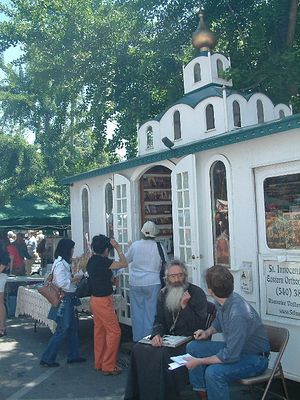 Photo: stinnocent.com
The new mobile chapel is reminiscent of another Orthodox mission on wheels. For many years, Fr. Michael Furry of St. Innocent of Alaska Church in Roanoke, VA, could be spotted driving his mobile Orthodox bookstore, cupola and all, which arose out of a 1969 Chevrolet van, formerly used to deliver potato chips.

The Orthodox Church’s prayers “transport us to another understanding of life,” Fr. Michael said, in an interview with the Roanoke Times, and so his mobile bookstore and chapel also transported Orthodoxy to many souls thirsting for Truth.

Fr. Anthony and the Holy Theophany parish and the Diocese of the West have similar hopes for the new chapel: “May she continue to shine a light for faith, reverence, and the fear of God for many years.” Catch a Fire: An Athonite Missionary to America
On Elder Ephraim, Founder and Elder of St. Anthony's Monastery
Jesse Dominick
It is said that the state of monasticism in a local Church is a microcosm of the state of that entire local Church, and thus America is undoubtedly in need of strong monasteries that can provide clear, Patristic guidance. Elder Ephraim came to America in response to the pleas of the faithful to provide this guidance, but in doing so many questions have been raised concerning the nature of Orthodox monasticism and teachings. To assess his role and importance for American Orthodoxy it is helpful to investigate his life and spiritual development, which will provide insight into him whom Metropolitan Hierotheos Vlachos says “received fire, and ... has imparted this fire ... to the Church in America that has great need of it.” Planting Grant Missions: “Where is the work?”

Planting Grant Missions: “Where is the work?”
One thing about which Father David is certain is that in mission work, there is no “one-size-fits-all” model for success. Orthodox church keeps it ‘historic’
St. Anthony’s is the first and only permanent structure in the Bozeman area for the Eastern Orthodox faith. One year ago, the church opened its doors after parish members built it from the ground up. Since then, their numbers have steadily grown.
Comments

Fr. Anthony Karbo6/2/2017 6:47 pm
Bless! I thought you'd be interested to know that the initial idea of the "mobile chapel" came from seeing a video of Optina Monastery towing a "mobile chapel" out to the fields so that harvesters could attend services: https://www.youtube.com/watch?time_continue=5&v=62-zEdyf7NA From that point, internet research led us to the very chapel/bookstore of Fr. Michael mentioned above... not to mention the priests and corresponding chapel parachuted out of a plane by the Russian Church! Such was the inspiration behind our efforts. Fr. Anthony
×