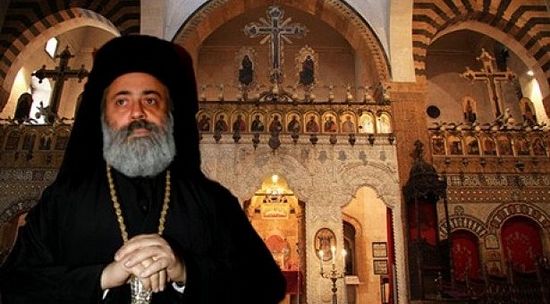 During the course of recent negotiations with Hezbollah and the Syrian army, the terrorist organization ISIS denied that it had kidnapped Metropolitan Paul of Aleppo and Oriental Orthodox Metropolitan Johanna Ibrahim, who were abducted on April 22, 2013, reports vimaorthodoxias.gr.

Hezbollah and the Syrian army recently trapped 300 terrorists from the Islamic State on Mount Qalamoun, on the border of Lebanon and Syria. Faced with the risk of complete extermination, the terrorists were forced to surrender. Their agreement included the withdrawal of the 300 terrorists with their families, a total of 600 people, from the area of Deir-ez-Zor, and the delivery by ISIS of the body of 8 Lebanese soldiers who were captured and executed by jihadists in 2014 in their attack on the city of Arsal. They also demanded that ISIS surrender a captive Hezbollah soldier.

The negotiations were headed by Lebanese Chief of Intelligence Services General Abbas Ibrahim, who reported to journalists that the talks included the fate of the kidnapped metropolitans, but ISIS assured its opposition that they had not kidnapped them and did not know anything about them.

“We are now reviewing their file from the very beginning to determine which side kidnapped them. I believe that the Islamic State is telling the truth, because it is in collapse and during the negotiations it was under pressure, so it cannot hide anything,” Ibrahim said.

It also seems unlikely that the Islamic State would have any interest in concealing the truth about the abducted metropolitans, because the deal was very favorable for the group, as it would hand over the two metropolitans, alive or dead, in return for saving 300 rebels from certain death. This leads to the almost certain conclusion that the two bishops were kidnapped by Al-Qaeda, who either held or executed them in the area of ​​Idlib, Syria. Met. Paul had earlier managed to send a message with his phone stating that they had been kidnapped by Al-Qaeda and were on their way to Turkey.

Discovering the truth about the metropolitans’ kidnapping has proven very difficult. The Supreme Mufti of Syria Ahmad Badreddin Hassoun earlier claimed that Chechen militans and Turkish intelligence agencies were involved in the abduction of the two Christian leaders. General Abbas Ibrahim had reported in October 2013 that their whereabouts had almost been determined and that they had “started negotiations for their liberation. At the moment we are holding indirect negotiations with the abductors, and that is very important for achieving the results we hope for.”