“No Saint was loved in the West more than St. Catherine” 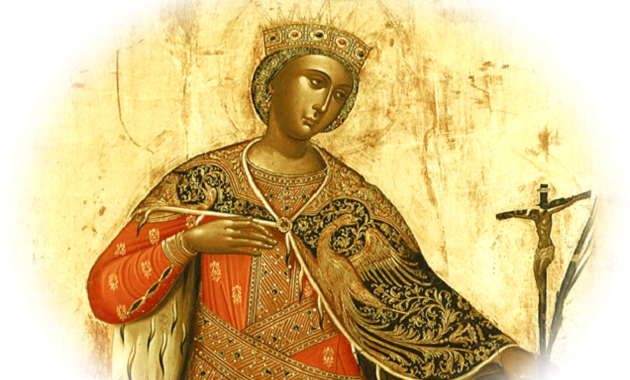 Sinai became widely known, particularly in Europe, with the spreading of the fame and cult of St. Catherine. Symeon Metaphrastes contributed greatly in making the life of the Saint known to the laity when, in the 10th century, he wrote on “the martyrdom of the great Martyr and in the name of Christ victorious Saint Catherine”.

The high-born learned maiden had studied at the ethnic schools of that age philosophy, rhetorics poetry, music, physics, mathematics, astronomy and medicine. He beauty and amazing learning, her aristocratic birth and noble character did not prevent her form accepting Jesus Christ, “the heavenly spouse”, and she was baptized a Christian.

When in the beginning of the 4th century the emperor Maximum persecuted the Christians, Catherine publicly accused the emperor of worshipping idols and fearlessly confessed her Christian faith. To dissuade her, the emperor ordered fifty philosophers to discuss with Catherine and demolish her Christian arguments. Their attempt failed, and they, along with many others from the emperor’s closer circle, believed in Christ. When Maximus realized the futility of these efforts, he resorted to torture. He gave orders for the making of spiked wheels, but even this horrible torment failed to break the Saint, who was finally beheaded. Her body was then taken by angels and carried to the highest peak of Mount Sinai.

The Saints’s cult and iconography had likewise spread in the East. She was portrayed in royal robes, wearing a crown and surrounded with objects alluding to her wisdom and martyrdom: a quill-pen, a globe, books, and a spiked wheel. To these the Byzantine hagiographers added depictions of Mount Sinai, Mount Horeb and the Mount of St. Catherine.

...Read the rest at  Pemptousia. Bride of Christ, St. Catherine of Alexandria
Pilgrms approach one by one to kiss the Saint’s precious relics, each with the secret prayer closest to his heart, and then bow to receive the ring blessed by her grace, to be worn forever in mystical union with the Heavenly Bridegroom – and all those illumined by the Holy Light of Sinai to exchange the worship of this world’s false gods for union with the Most High – inspired by the radiant example of our Princess among the Saints, the Holy Great-Martyr and All-Wise Bride of Christ, Catherine of Alexandria.

“In Christ a man receives more than he lost in Adam”
A Conversation with Archbishop Damian of Sinai and Pharan
Deacon Vladimir Vasilik
But then let us think about what kind of purity a man must acquire in order to enter into this Kingdom. Let us not put off our salvation till later, nor hope that we will be purified before death or even at the time of death, or that we will land in “purgatory,” as the Catholics mistakenly think. For those who say, “Later,” it will never come. Therefore let us be concerned about our salvation now, while it is still possible to say, “Now.”
Comments
×