Met. Hilarion celebrates rite of reuniting apostates to the Church 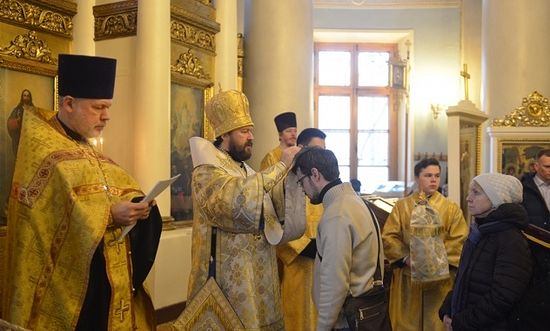 The chairman of the Moscow Patriarchate’s Department for External Church Relations Metropolitan Hilarion (Alfeyev) of Volokolamsk celebrated the rite of reuniting apostates to the Orthodox Church on Sunday in the Church of the “Joy of All Who Sorrow” Icon of the Mother of God, reports the official site of the Russian Orthodox Church.

The rite of union is celebrated in the Joy of All Who Sorrow Church twice a year. The rite was previously celebrated on April 8. This time, 61 people renounced paganism, sectarian delusions, and schismatic false beliefs, giving an oath of allegiance on the holy Gospel, after which Met. Hilarion laid episcopal omophorion on the head of each of those who were returning to the Lord Jesus Christ.

His Eminence congratulated all on their return to the saving enclosure of the One, Holy, Catholic, and Apostolic Church, saying, “The Church is a ship upon which we all move together on the path to the Heavenly Kingdom. The Church was created by the Lord Jesus Christ Himself, God incarnate, for every one of us, to give us strength and the chance to live virtuously, fulfilling His Divine commandments, to unite with God already in this life not only spiritually, through and prayer and fellowship with Him, but physically, through communing of the Holy Mysteries of Christ.”

The Church has carried out its mission of salvation for nearly 2,000 years already, but, as Met. Hilarion also noted, it has always been surrounded by false doctrines, heresies, and schisms which can confuse the faithful. “This happens in our day because the fight between God and the devil doesn’t stop even for a minute. And every man makes a choice in his life: to be with God or to be under the authority of the devil,” His Eminence continued.

“Today you have reunited yourselves to the Church and sided with God. I would like to wish you to never deviate into false doctrines. Believe and trust what the Church teaches,” Met. Hilarion exhorted, adding that when we don’t understand a teaching of the Church, we must still trust the Church, and come to understanding in time.

He also exhorted all the newly-restored Orthodox Christians to read the Gospel daily, to start and finish the day with prayer, and to try to live according to the Gospel commandments. Of course, he also urged all to often unite themselves to the Lord in the Holy Eucharist.

“Implore the Lord that He might preserve you in firm confession of the Orthodox faith, and try to transfer this faith to your children and loved ones, and may the Lord preserve you from all evil. Amen,” the metropolitan concluded.

Work with people who have fallen away from Orthodoxy is carried out in the Moscow church of the Joy of All Who Sorrow Icon of the Mother of God by the Center for Rehabilitation of Victims of Non-Traditional Religions in memory of A. S. Khomiakov. Currently the center is led by the church’s cleric priest Eugene Tremaskin. Preparatory talks are conducted for a few months before celebrating the rite of uniting to the Orthodox Church of sectarians and schismatics desiring to return to the true faith. “i understood that there was no Truth in what i was doing”
Ivan Katanayev, Fr. George Maximov

“I understood that there was no Truth in what I was doing” (includes Video)
Interview with Ivan Katanayev, a former skinhead
Why do patriotic young men turn into followers of Nazi ideology? What is the difference between Russian and European skinheads? What makes Neo-Paganism attractive to soccer fans? Is it easy to overcome prejudice toward Christianity? Do we need to preach Christianity in the streets? These are the topics of the interview with Ivan Katanayev. “When I Heard That Christ Was Life, I Saw The Light Shining For Me.”
Priest George Maximov

“When I Heard That Christ Was Life, I Saw The Light Shining For Me.”
Interview with Hieromonk Diomedes (Lukyanyuk)
Today Father George will discuss with hieromonk Diomedes (Lukyanyuk) such questions as why people become monks, can obedience be the reason for monks to go into schism, how to avoid the temptation of going into schism, what is monastic renunciation of one’ own will, and whether there is a difference between Greek and Russian monasteries. Heretics: Unhealed Healers
Fr. George Metallinos
Heresy is not just an error of the reasoning faculty, nor are heretics simply misplaced in finding the truth. In their case something happens deeper and more substantial. They know the Bible to the letter, often in amazing ways. But they lack something essential, and this lack radically distinguishes them from the Fathers. They lack the experience of the Holy Spirit of the Fathers, the interior illumination of the Spirit. This is because they have not gone through the therapeutic process of the Church.
Comments
×