What Does “For Righteousness Sake” Mean?

Blessed are they which are persecuted for righteousness’ sake:
for theirs is the kingdom of heaven. 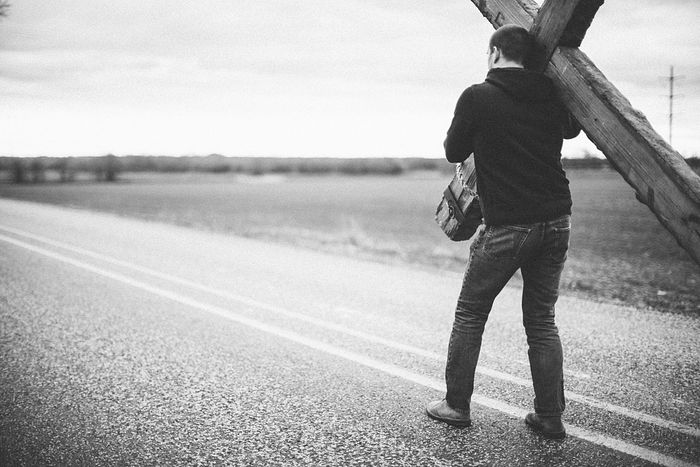 When Christ talks about righteousness, He does not mean worldly righteousness. For example, terrorists go and bomb America—worldly righteousness (justice) demands that America goes and bombs the terrorists in response. And people say that this is justice: You hit me, and I’ll hit you back! Because you’ve dealt with me unjustly1, I also have the right to deal with you unjustly.

Or for example, we have a field; worldly logic considers that it has to be divided in half, that we measure it and divide it, which is also not so bad—however, that is not the righteousness about which Christ is speaking. God’s righteousness is something else, and therefore Abba Isaac says, “If you say that God is fair, then it’s the same as if you were to blaspheme God, because He is not fair. For how could he be fair if He gives His good things to all without exception? He maketh his sun to rise on the evil and on the good, and sendeth rain on the just and on the unjust (Matt. 5:45).2 God loves all people and makes no difference between them at all. He does not have worldly logic.

What does Christ say? But whosoever shall smite thee on thy right cheek, turn to him the other also (Matt. 5:39). This is madness, judging from the worldly point of view, isn’t it? Today many, especially the young, say:

“Well okay, what are we anyway, victims? Stupid? Idiots? If someone comes and hits me, I shouldn’t react? That is, we’re supposed to be city madmen all our lives?”

Thus goes worldly logic, thus does man reason. But Christ comes and says to us that Blessed are they which are persecuted for righteousness’ sake: for theirs is the kingdom of heaven.

When a person is persecuted for righteousness’s sake, it does not mean that we unfailingly have to find the one who is persecuting him. Maybe no one is persecuting him, maybe there is no persecution right now, but a person himself should persecute his own passions. For example, today people judge because they like to judge:

“Well I like it!” someone says to you and asks, “What’s so bad about it? I like to do it, I judge people and their deeds because I like to judge.”

And we have to convince another—a young person, a child, a teenager—that just because you like something doesn’t at all mean that you have to do it, and it doesn’t mean that it’s good. You may like it, but it is still bad and destructive for you. You have to learn to drive away your old “I”—which likes whatever comes along—and fight against it.

Another comes and reviles and insults you, and you also want to say something bad, you want to give yourself free reign and hit him, but you restrain yourself, take yourself in hand, in order not to react that way. This is what it means to fight against one’s passions.

For example, today is a fast day, and you say, “I will fast!” but then a mass of things come up: “My head is spinning, I smell broiled meat, I’ve breathed it in and it’s just like I’ve eaten it. I’ll just take some and eat it in fact. I can’t just sniff it! And since I’ve already sniffed it my mouth is watering and I want it—and that’s just the same as eating it.” But you nevertheless say to yourself, “No, I won’t do it,” and fight it. Because you have to understand that spiritual life is a struggle, and if you don’t resolve to struggle then you can’t move forward in life in general, and in spiritual life in particular.

At baptism the priest seals us with the sign of the Holy Cross all over our bodies, if you recall. But unfortunately today Baptism is a spectacle, a worldly rite, if you look at how it is done. No one listens to what the priest is saying, he’s talking to himself; however God hears him. Thus, the priest places a seal on all of the person’s feelings, so that he might receive the spiritual armor and oppose sin, the passions, and the whole stormy flood that wants to drown him.

This is not easy; it is not easy to oppose your own self. This is very hard, and you have to begin with the small. For example, you like something that doesn’t belong to you. But since it’s not yours, you are forbidden to take it. “Yes, but that other person has ten of them!” Let him have 500 of them! You can’t take it—it doesn’t belong to you. Leave it there; the fact that you like it does not mean that you have the right to take it.

You want a motorcycle, you like it. But have you thought about the fact that there are people upon whom you depend and who will worry about you? How can you be happy and joyful and live how you want, while making other people unhappy? There they sit on the couch and wait for you to return home so that they can see whether you’re dead or alive? They ascend Golgotha every night, and it makes no difference to you because “I like it”? No, a person should learn to struggle against his own self. If we don’t learn how to do this and if we don’t have this understanding of life, we will not become individuals and will destroy ourselves.

I remember in 1976, when I first went to the Holy Mountain of Athos, Elder Paisios was performing a great ascetic labor and was eating nothing but raw vegetables and water. He was thin, had half a lung, and was almost near death. One doctor from Thessalonica University, a pious man, said to him:

“Geronda, eat at least a piece of bread! That would be enough to strengthen you.”

A person should have such a valorous spirit that he would be ready to endure anything, even death, but not to budge! Because he knows that if he does that, he will stop on his path to God.

Big problems happen in a family when parents say one thing, and then change their minds the next day. I remember one man who had gone off the true path, and when talking about his life he said precisely this to me. He analyzed his life and understood that the main reason why he rebelled and ran away from his family was because his father lied. For example, he said to him:

“Do this work around the house and I’ll give you a lira!”

But then he wouldn’t give it to him. This caused him to rebel and provoked a great emotional problem.

When a person opposes himself, first he “persecutes” himself, the old man, he forces himself, does not allow himself to do what he wants. And this is true, that at first he experiences difficulties, because as we said, he has to cut off his own desire, preference, and wants.

The fathers were very careful in these matters. Thus, one monk took care of a leper, whose state became worse and worse, so that finally he began emitting a very unpleasant smell and was seeping pus. When he came to the monk, the latter felt repulsion and said to himself, “I can’t! Let him go to someone else!” Then, however, he forced himself and resolved. “No, you’ll go! And if you dare to persuade yourself not to go to him, then not only will you breathe in the horrid smell of leprous flesh, but I will make you eat it! So that you won’t fight against the work that you are supposed to do.”

Do you see what opposition the saints showed against their self-love and self-pleasure? By fighting against it they cultivated a strong character, a brave spirit, a martyric spirit, and became like those persecuted for righteousness sake.

Various problems come up in families, and a wife comes who has a difficult husband and says:

“I can’t endure him any longer! He is simply driving me crazy! He’s a torture!

And you ask her:

“If this man were not your husband but your son, would you kick him out of the house?”

Would a mother kick out her child, for anything he did? This is not possible. She cannot just up and do that. That means that if you look at your husband with great love, then you’ll show patience. That is, a person draws out patience at every stage of his life in simple things. Have you ever gone into a church, for example, and stood next to someone who irritates you: he clears his throat, smells bad, or jitters endlessly. Learn to show patience, do not step away, begin with the small, learn to endure, wait, cut off your own will. And do not hurry, do not wish that everything would always be as you like and comfortable for you.

Abba Dorotheus in his “Ascetical Homilies” talks about cutting off the will, teaching that we have to begin with the small things and have patience.3 If you have no patience, then when your passions come up to the surface they will be able to lead you wherever they like, and you will no longer be able to say “no”, because only those who have learned to have patience can withstand these passions. On Hope and Despair
Ilya Kabanov

On Hope and Despair
From a conversation with a contemporary Athonite monk
Ilya Kabanov
Some lay guests complained to a monk of one of the Athonite sketes that worldly commotion, difficulties, and problems deprive them of all their time and strength, causing them to despair, and they didn’t know how to save their souls in such conditions. The Cross as the Way of Life
Fr. Stephen Freeman
Prayer is directing our hearts outside of ourselves and towards God. Pray. Kindness places the other ahead of ourselves. Be kind. Love God. Love His Cross.
×