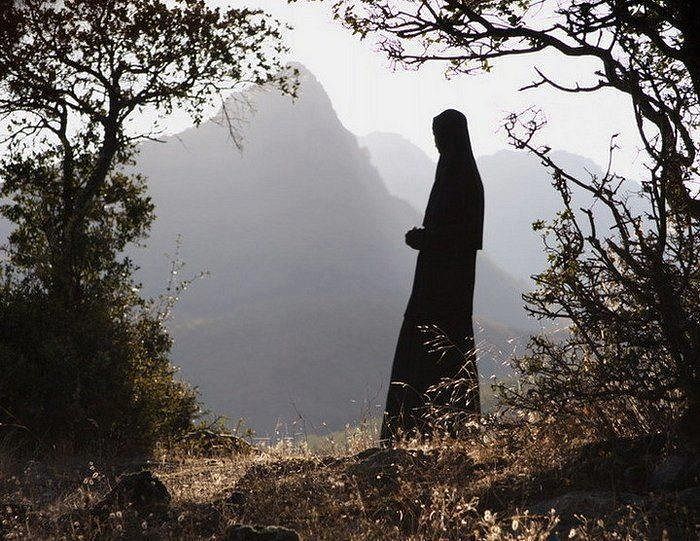 This blessed Sunday begins the last week of the forty-day Lent, after which we enter into Holy Week, the week of great struggles in which the entire journey of this fast is perfected when death is transformed into resurrection.

Man’s ascending procession towards God is first of all a journey of faith. However, faith needs serious works of asceticism. Faith needs works, and works cannot be good and perfect without asceticism purifying the works from the evil of the passion of self-love. Just as the body needs bread, so works need ascetic struggles. For this reason, we say that living faith needs asceticism. We express this asceticism in blessed fasting, long prayers, vigils and other struggles. Through these means, the soul submits, through faith, its will to God and lives in Him. Asceticism is the true nourishment of true faith so that faith becomes perfect and not merely theoretical. Without the ascetic life, faith will surely die. Faith will die first in its rationality and limited logic and secondly by the action of the passions, whereby faith turns towards itself instead of turning towards God. St. Isaac the Syrian says that “enduring difficulties voluntarily and with love reveals the sincerity of faith, but the work of leisure happens in the corrupt conscience. The love of the saints was tested by difficulties and not by rest, because work done without toil is a virtue of the people of the world who do good works externally and do not benefit from them.”

For by faith the saints surrendered themselves to God, and by asceticism they purified their will. The saints subdued their bodies and surrendered them to God’s commandments. St. Hilary of Poitiers points out that the anxious soul will not find comfort except by submission to faith. This surrender is what will drive the soul to martyrdom, without fear, to its living faith.

Only living faith connects the created with his Creator. This faith is not an outward conviction in man. It works internally in man and directs the energies of the soul towards genuine knowledge of God. In His teachings, Christ emphasized works of faith. This became clear when Christ persistently asked, during the incident of the woman with the issue of blood, “Who touched Me?” Thus, Christ says that we cannot really touch Him except by faith. Many people touched Him as a man, but only one person touched Him as God, as St. Ephraim the Syrian says.

This was also the case of the Virgin Mary in her Annunciation, when the angel informed her of the coming fullness of time; she noetically touched the Child Who was to be incarnate through her as God. The immediate surrender to God’s will, after her question to the angel, revealed the power of the faith that Mary lived. The strength of her faith reveals the ascetic manner of her life, because strength of faith appears in accepting God’s will with humility and without fear or hesitation. God probably deigned that this year the Feast of Annunciation should fall during Holy Week because the feast expresses the goal of Lent: purification of man’s personal will through achieving extreme humility, and also through achieving extreme levels of faith.

As such, Mary’s faith was a mystery that put to death Eve’s ingratitude, when she accepted that the economy of salvation would spring from her. By Mary’s actions, Christ came and Adam disappeared; the sonship of the Church has been restored in place of the exile from Paradise. The angel’s annunciation nullified the temptation of the serpent and gave eternal life in place of death and eternal damnation.

The faith we are discussing cannot be disarrayed because it is one and holy. In Orthodoxy there is no such thing as mere faith—faith that is not defined by dogmas and canons. Our faith in God ascends the ladder of these well-defined and holy dogmas. In his book Ancoratus or The Well-Anchored Man, St. Epiphanius of Salamis (Cyprus) explains that true faith is like an anchor that a person needs in his journey through the sea of life—a sea that is filled with trials, confusions, demons, and heresies.

The ascent of true faith is not only man’s work, but is also a gift from God. In his teachings, St. Cyril of Jerusalem speaks of two levels of faith: “dogmatic faith,” which is mainly concerned with satisfaction of the soul, and which is a means for leading the soul to the next level of faith—“the gift of grace, the gift of Christ.” This faith is superior to human logical analysis of faith, because it illumines the soul internally and prepares her to contemplate God and the rewards of the age to come.

Christians know the mystery of Christ by the power of true faith and not by logical proofs. For this reason, the living Church, which is faithful in keeping the commandments of its Christ, plants in the hearts of its children the ardent love of Christ through love of the true Orthodox faith. And it puts the word of God and prayer of the heart in the meditations of its children, through spiritual toil for His sake. Our Christ is not a Christ of organizations, but He is The Christ of the eternal Father. Having Once Tasted of a Life Without Sin…
Fr. Alexander Shargunov

Having Once Tasted of a Life Without Sin…
A Homily for Thursday of the Fifth Week of Great Lent
Archpriest Alexander Shargunov
The Lord gave St. Mary of Egypt to know what grace is when she lived in terrible sins, and granted her to see what an obstacle sin is for communion with God. Her answer to this gift from God should ever be before our eyes and should be our constant contemplation. Humble Repentance or Paralyzing Guilt?: Homily on St. Mary of Egypt for the 5th Sunday of Lent in the Orthodox Church
Fr. Philip LeMasters

Humble Repentance or Paralyzing Guilt?: Homily on St. Mary of Egypt for the 5th Sunday of Lent in the Orthodox Church
Fr. Philip LeMasters
Whenever we experience guilt and shame because of something we have done wrong, we need to ask ourselves a question. Do we feel that way because we are sorrowful that we have disobeyed God or because we cannot stand being less than perfect in our own eyes or those of others?

Ghassan Khoury3/29/2018 5:35 pm
Thank you for this article. It gives a large meaning to our struggle within our faith. Especially during our lent. I was very much inspired and encouraged to keep on my journey in faith and continue the lent until I achieve a little bit of its deep spiritual meaning. The translation is great. I will be able to share it with my kids, family and my friends here in the united states. God bless you and hope for more such articles to keep coming.

Habib khoury3/26/2018 2:02 pm
I wish this translation continue to give lots of benefits to lots of non arabic readers
Thank you so much we need to send this to hundreds of friends and my 6 god children
God bless you
×