Estonian Church to elect primate May 29

The Holy Synod of the Estonian Orthodox Church of the Moscow Patriarchate has chosen candidates for its next primate and announced that the first hierarch will be chosen at its upcoming May 29th session.

The previous Estonian primate, His Eminence Metropolitan Cornelius of Tallinn, reposed on April 19 in his 94th year of life, having served as the primate of the Estonian Church since 1990.

They also chose May 29 as the date for the next session when the primate will be chosen. 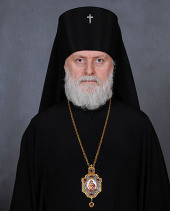 Abp. Evgeny of Verey was born October 9, 1957 in Kazakhstan. He graduated from the Moscow Theological Seminary in 1983 and the Academy in 1987 with the thesis “Pastoral Care in the Russian Church in the Tenth-Thirteenth Centuries.”

He was tonsured as a monk with the name Evgeny on July 27, 1986, and was ordained as a hierodeacon on August 3 and as a hieromonk on August 28. He was elevated to the rank of igumen on Pascha in 1988 and to that of archimandrite on January 1, 1989, being appointed the deputy rector of the Moscow Theological Seminary and later as inspector. He later served as rector of the Stavropol Theological Seminary, and in 1994 was appointed as the acting Chairman of the Educational Committee of the Holy Synod of the Russian Orthodox Church.

He was consecrated as the Bishop of Verey on April 16, 1994, and in July 1995 he was appointed the rector of Moscow theological schools. In July 1998 he became the Chairman of the Educational Committee.

He was elevated to the rank of archbishop on February 25, 2000. In 2004 he was awarded the academic title of Professor of the Moscow Theological Academy. 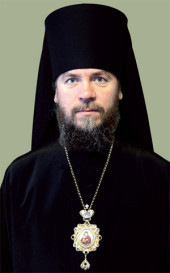 He served as the abbot of the Holy Trinity Monastery in Chufarovo from 1993 to 2000, and as abbot of the St. John the Theologian Monastery in Sanaxar since 2000. He also serves as the Chairman of the Sanaxar Diocese’s Department for Charity and Social Service.

He was elevated to the rank of archimandrite on July 20, 2009 in preparation for becoming the bishop of the newly-formed Diocese of Narva, a vicariate of the Tallinn Diocese. He was consecrated to the episcopacy the next day.

He was appointed as the ruling bishop of the Narva Diocese on May 30, 2011. Pukhtitsa Dormition Convent: An Uninterrupted Tradition of Female Monasticism
Ekaterina Orlova, Abbess Filareta (Kalacheva)
How does a monastery that was never closed in the Soviet years and that has raised up abbesses for many convents in various dioceses of the Russian Orthodox Church live today? Does it preserve the inheritance left by former abbess Mother Barbara? We spoke with the current Pukhtitsa mother superior, Abbess Philareta (Kalacheva) on these questions and on monastic life in general.
×