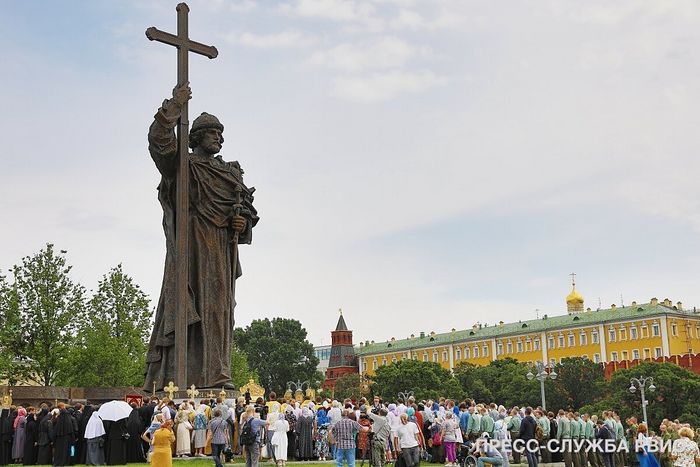 The delegations are representing the Alexandrian, Antioch, Jerusalem, Georgian, Serbian, Bulgarian, Cypriot, Albanian, and Polish Orthodox Churches, as well as the Orthodox Church of the Czech Lands and Slovakia.

Among the distinguished guests is His Beatitude Patriarch Theodoros of Alexandria and All Africa, who arrived to Moscow yesterday, and who has a special love for the Russian Church, having lived, studied, and prayed in Odessa for ten years.

“It is very important that our brothers from the entire Orthodox world are in Moscow and Kiev now, to testify together with us to our unity on such an important date for the Russian Orthodox Church,” Patriarcla Press Secretary Fr. Alexander Volkov stated.

“Let us pray together, share our joys and concerns, and think about how to strengthen the unity of our world Orthodox family,” Fr. Nikolai Balashov of the Moscow Patriarchate’s Department for External Church Relations reflected.

In this vein, His Holiness Patriarch Kirill of Moscow noted to the gathered representatives that their support for the canonical Ukrainian Orthodox Church under His Beatitude Metropolitan Onuphry of Kiev and All Ukraine and for the unity of the Russian Orthodox Church at such a time is invaluable.

He also warned that, “Attempts to artificially tear the Ukrainian Orthodox Church from the Moscow Patriarchate could lead to a catastrophe of a pan-Orthodox scale,” reports RIA-Novosti.

His Holiness also reminded them that for the Russian Church “Kiev is no ordinary city,” but the “mother of Russian cities; it is the place of the Baptism of Rus’ and the birth of Russian Orthodoxy.”

“For our Church, Kiev is as much a holy place as Constantinople or Jerusalem are for all Orthodox Christians, or Kosovo and Metohija for the Serbian Orthodox Church,” the head of the Russian Church added.

All of the gathered hierarchs and clergy will celebrate the All-Night Vigil tonight in honor of St. Vladimir the Great, the Baptizer of Rus’, headed by the primates of the Russian and Alexandrian Churches. The Divine Liturgy will be celebrated on the cathedral square in the Moscow Kremlin tomorrow. Patriarchal and Synodal Epistle of the Russian Orthodox Church for the 1,030th anniversary of the Baptism of Rus’
His Holiness Patriarch Kirill

Patriarchal and Synodal Epistle of the Russian Orthodox Church for the 1,030th anniversary of the Baptism of Rus’
His Holiness Patriarch Kirill
Why do we refer to the Baptism of Rus’ as a turning point for the history of our peoples? Because it forever changed the face of the of the entirety of Slavic civilization and predetermined the subsequent path of its development.

Delegations from 12 Local Churches to participate in Baptism of Rus’ celebrations in Ukraine
Fr. Nikolai also noted that the number and level of Church delegations that will be participating in the Ukrainian Church’s celebrations show that all the Local Churches support the canonical Ukrainian Church and His Beatitude Metropolitan Onuphry, as the Churches themselves have often expressed.