A conversation with the First Hierarch of ROCOR, His Eminence Metropolitan Hilarion of Eastern America and New York. 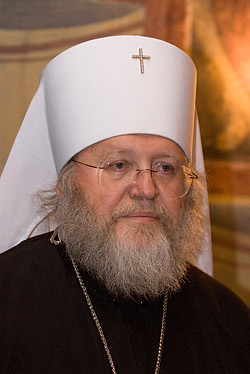 His Eminence Metropolitan Hilarion. Photo: G.Balajanz / Pravoslavie.Ru
– Your Eminence, when did you first visit Latin America?

– I first became acquainted with the Latin American region in 1987. The South American Diocese was ruled at the time by Bishop Innokenty (Petrov, 1902-1987). He led an interesting life. Vladyka Innokenty fought in the Russian Civil War and participated in the seizure of Ekaterinburg in July 1918. He was inside the infamous Ipatiev House soon after the execution of Tsar Nicholas II and his family. In 1948, Ivan Petrov (his lay name), made his way to Argentina. In 1957, he became a priest, Fr John. Following the death of Archbishop Afanassy (Martos, 1904-1983) of Buenos Aires, Argentina and Paraguay, he was tonsured a monk and was given control of the orphaned diocese.

Bishop Innokenty spent most of his time in Asuncion, Paraguay, which was why the First Hierarch of the Russian Orthodox Church Outside of Russia, Metropolitan Vitaly (Oustinov, 1910-2006) sent me to Argentina. I remember that trip fondly. The greatest impression was made by the ceremony of renaming one of the streets of the Argentinian capital in honor of Holy Prince Vladimir, Equal-to-the-Apostles.

I traveled to the Misiones Province together with the Rector of Holy Trinity Church in Buenos Aires, Protopriest Valentin Iwasjewicz, where the Russian Church Abroad has two parishes. Visiting with an elderly Ukranian man known as Don Juan, who grew mate tea, which we tried passing around the calabash gourd with a metal pipe called a bombilla. At a luncheon in the town of Tres-Capones, women sang Ukrainian folk songs, which reminded me of my youth, which I spent among Ukrainian emigres.

In addition to Argentina, I made visits to Brazil, Chile, Paraguay and Uruguay. In Santiago I was escorted by the Rector of the Church of the Holy Trinity and the Mother of God of Kazan, Archimandrite Veniamin (Vozniuk). He showed me the house of Archbishop Leonty (Filippovich, 1904-1971), the Ruling Bishop of Chile and Peru from 1953-1969, and gave me his vestments, sewn of Japanese silk and embroidered with flowers. In Asuncion, I concelebrated with Vladyka Innokenty at Protection Church, and in Montevido, I celebrated Divine Liturgy in Resurrection Church, the only Russian Church in Uruguay.

– In your opinion, when did the South American Diocese reach its historic peak?

– The blossoming of this diocese lasted a fairly long time. In the 1920’s, when a wave of immigrants fleeing the Bolsheviks in Russia reached the New World, a flurry of construction of Orthodox churches began. In the 1960’s, there were four episcopal cathedras: Argentina and Paraguay, Brazil, Chile and Peru and Venezuela. It is interesting that Metropolitan Vitaly, Primate of ROCOR between 1985-2001, was the Bishop of Montevideo and Vicar of the Sao-Paolo and Brazil Diocese in the early 1950’s. He established a monastery in Sao Paolo dedicated to St Job of Pochaev, established an orphanage for boys and set up a publishing concern.

– What is the current state of affairs in the diocese, in your view?

– The South American Diocese is undergoing a profound crisis. There are reasons for this: the lack of clergymen, the infrequent divine services, the dearth of necessary ecclesiastical knowledge, especially in the provinces. All this has had troubling consequences. For instance, in Paraguay, dozens of Russians have married Catholics and now attend Catholic churches. Fortunately, they have not forgotten their roots yet, and when they have the opportunity, they attend Orthodox services.

The problem of not having enough clergymen is an onerous one. The Seminary at Holy Trinity Monastery has had dozens of graduates from Latin America, yet a large number of them settled in the USA. Of course, the Church Abroad has people who wish to serve in the South American Diocese, but some do not speak Spanish or Portuguese, others don’t speak Russian, or, in fact, even know Church Slavonic.

In January 2010, we suffered a serious loss: a young priest, Fr Rodion Aragon, died, who was recently ordained to the priesthood and appointed Rector of the Mother of God of Vladimir Church in San Jose, the capital of Costa Rica. Before then, we had no resident priests of the Russian Orthodox Church in Costa Rica. Now the parishioners there are left without a pastor once again.

– Maybe the crisis of this diocese is a reflection of the difficulties endured by the Russian diaspora in general?

– Without a doubt, the two are related. In 1987, I visited that Russian colony in what was a difficult period. Its membership had fallen significantly. Hundreds of Russians, due to material difficulties, left for other places, mostly to the US. Russian organizations faded. The publication of Russian-language newspapers and magazines has almost ceased. Books are no longer being published. Since then, little has changed.

But no matter what, Russian people have not lost their firm faith. The new generations are reason for a great deal of hope. During my first visit to Buenos Aires, I met with Russian youth and saw that they are striving to immerse themselves in the Russian spiritual tradition and learn more about the Russian Orthodox Church. Young people are well aware that the only place around which they can come together is the Orthodox parish. I shared my thoughts on this with them. Several years went by, and Sao Paolo then held the first youth conference of the South American Diocese.

– The South American cathedra had remained empty for three years since the death of Bishop Alexander (Mileant, 1938-2005). In June, 2008, Vladyka John (Berzins) was appointed to it with the title Bishop of Caracas, and later Bishop of South America. What changes have taken place in the Diocese during his rule?

– The very presence of a bishop is extremely important. As a result of the age and illness of Mitred Protopriest Vladimir Skalon, the only priest of Resurrection Cathedral in Buenos Aires, Bishop John regularly conducts services at that church. The prayers of the Vladyka bolster the spiritual strength of his parishioners.

In September, 2009, the news came that the Argentinian authorities came down in favor of the community of Resurrection Cathedral over the property quarrel with a group of people who went into schism following the reestablishment of canonical communion within the Russian Church in 2007. The schismatics tried to change the Regulations of the Russian Orthodox Association in Argentina, presenting themselves as the juridical person of the Russian Church Abroad with the aim of seizing its property. They removed the President of the Association, Protopriest Vladimir Skalon and introduced new members. Fr Vladimir and Protopriest Igor Bulatov, Rector of Protection and St Germogen Churches in the outskirts of Buenos Aires lodged a complaint against the schismatics with the Ministry of Justice of Argentina. After two years of litigation, the Inspector General restored Fr Vladimir to his post and declared the decisions of the association meetings of 2007-2008 invalid.

– What in the signing of the Act of Canonical Communion with the Moscow Patriarchate evoked the dissatisfaction of most of the parishes of the Russian Church Abroad in Latin America?

– Many clergymen and laity of the South American Diocese have been isolated from the Church. They are little interested in what is happening in their historic homeland and live with outdated conceptions of the Moscow Patriarchate. Therein lies the reason for the fact that more than half of the South American parishes rejected obedience to the hierarchy and joined the so-called “Temporary Supreme Central Administration of the Russian Church Abroad” headed by “Bishop” Agafangel (Pashkovsky), who was suspended by our Synod of Bishops and defrocked. The parishioners of Sao Paolo have found themselves in a quandary: they are forced to seek spiritual ministry from schismatics, since there are simply no canonical parishes in the city.

– What means do you see in healing this ecclesiastical division?

– The chief way is to pray for those who separated from fullness of the Church. Schismatics must learn to follow decisions adopted by the one Church inspired by the Holy Spirit. In my opinion, in the near future our erring brethren will recognize that being in schism is a spiritual dead end.

– How has the appearance of a “South American Diocese” with its own “bishop,” Gregory (Petrenko) exacerbated the schism?

– I think that essentially nothing has changed. “Bishop” Gregory of Sao Paolo and South America bears no animosity towards the Russian Church Abroad. He is taking a wait-and-see approach, and I pray that the Lord shows him the right path.

– How important were the Days of Russia celebrated in Latin America in October-November 2008?

– This was a very important event for the participants. The bishops and priests from Russia got to know the life of the parishes of the Church Abroad. The Russian-speaking diaspora were able to pray at divine service celebrated by clergymen of both branches of the Russian Church for the first time. Thousands of Latin Americans, through the exhibition “Orthodox Russia,” concerts given by Sretensky Monastery Male Choir and contact with Russian priests, came to behold the riches of Russian Orthodoxy.

– How is the relationship between the Russian Church Abroad and the Christian churches of the region developing?

– In Latin America, we have good, neighborly relations with the heterodox Churches. These are mostly Roman Catholics, and we cannot ignore the Catholic Church. But the Church Abroad rejects any ecumenical initiatives or joint prayers.

– Do you maintain contact with government organs in Latin America?

– Yes, the Russian Orthodox Church has contact with government offices as needed. During the Days of Russia in Latin America, the ecclesiastical delegation was received by the political leaders of a number of countries. But mainly, we work with embassies and consulates of Russia, which always help us. Latin America: Peoples in Search of Orthodoxy
They found me, and they knocked on my door, asking me to receive them. I sent two priests to go and meet them so that we could determine who they are and if their request is serious and valid. I was stunned. It was a "group" of more than 500.000 people, with 338 churches and chapels, most of whom were natives of Guatemala - and in fact of the ancient race of Mayans! Archimandrite Tikhon Calls Upon the Schismatics of Latin America to Change Their Mind
Olga Lipich
Clergymen who lead their parish into schism, are “criminally playing with the salvation” of their flock, declared Archimandrite Tikhon Shevkunov, the Father Superior of Moscow’s Sretensky Monastery, in an interview with RIA News about the project “Days of Russia in Latin America.”
Comments

Nina Vaughan7/4/2014 3:46 pm
Its Nina Harionov again message left in 2010 I forget to leave my email address if it helps Im after a russian convent in sao paulo in the 60s I spent some time there as a child would love to know the name.
nina04@dcsi.net.au if anyone can help me please

Nina Harionov9/10/2013 11:39 am
this has nothing to do with the article but I am hoping some one there can help me in 1964 I attended a russian orthodox convent in sao pablo brazil my mum does not remember the name or where it was exactly can you help me with a name and place please