The Nativity of St. John the Forerunner and Baptist of Christ 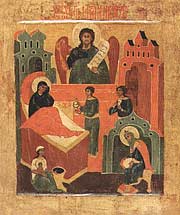 Icon of the Nativity of St. John the Forerunner
Six months before his appearing to the most holy Virgin Mary in Nazareth, the great Gabriel, archangel of the Lord, appeared to Zacharias the High Priest in the Temple in Jerusalem. Before he revealed the miraculous conception by a virgin who had not known a man, the archangel revealed the wondrous conceiving by an old and barren woman. Zacharias was unable at once to believe the words of God’s herald, and for this his tongue was bound in dumbness and remained thus until the eighth day after John’s birth. The kinsfolk of Zacharias and Elizabeth gathered together on that day for the infant’s circumcision and naming. When they inquired of the father how he wished the child to be called, he, being still dumb, wrote on a slate: ‘John’. At that moment his tongue was loosed and he began to speak. Zacharias’ house was on the heights between Bethlehem and Hebron. The news of the angel’s appearing to Zacharias, of his dumbness and of the loosening of his tongue at the exact moment that he wrote ‘John’, was carried throughout all Israel, coming to Herod’s ears.

So, when he sent men to kill all the infants around Bethlehem, he sent men off to Zacharias’ family house in the hills to slay John also. But Elizabeth hid the child in good time. The king was enraged at this, and sent an executioner to the Temple to kill Zacharias (for it was then his turn to serve in the Temple again). Zacharias was killed between the court and the Temple, and his blood clotted and solidified on the paving slabs, and remained as an enduring witness against Herod. Elizabeth hid herself and the child in a cave, where she soon died. The young John remained in the wilderness alone in the care of God and His angels.

O Prophet and Forerunner of the coming of Christ,/ we honor thee lovingly but cannot extol thee worthily;/ for by thy birth/ thy mother’s barrenness and thy father’s dumbness were unloosed;/ and the Incarnation of the Son of God is proclaimed to the world.

The formerly barren one today gives birth to the Forerunner of Christ/ Who is the fulfillment of prophecy./ For the Prophet, Herald and Forerunner of the Word/ submitted to Him Whom the prophets foretold/ by laying his hand on Him in the Jordan.