Clergy of Kaluga Diocese participate in the expedition "Alaska 2010" 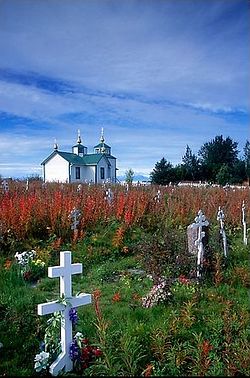 The expedition became the continuation of the project aimed at immortalizing the memory of Russian researchers in Alaska, and was dedicated to the 200-year anniversary of the birth of discoverer and researcher L. A. Zagoskin (1808–1890). The expedition's scientific program is being overseen by the Russian Academy of Sciences.

Two groups of the expedition covered a total of over 1100 kilometers along the rivers Innoko, Yukon, and Kuskokwim. Taking into consideration last year's expedition (Alaska 2009), the expedition team repeated all the river routes of Lavrenty Zagoskin, and covered the historic crossing between the Yukon and Kusokwim Rivers, which Lavrenty Alexseyevich Zagoskin made half a century ago.

During the expedition a wealth of scientific material was gathered, and display pieces were brought back for the future Ryazan museum of explorers—the Museum of Russian America. In the village of Rashen Mishen the participants cleaned up the cemetery of Russian colonists which they had discovered during last year's expedition, and prayer services for the reposed were served.

The final point on the route was the town of Bethel, where the trip was summed up, and a presentation was given about the expedition. A moleben of thanksgiving was served in the local Orthodox Church.