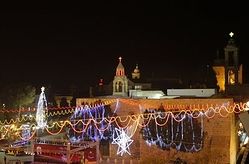 Church of The Nativity, Bethlehem, decorated with Christmas lights. (Photo: AP/Nasser Shiyoukhi)
The little town of Bethlehem saw the highest number of (New Calendar) Christmas pilgrims in a decade, according to the Israeli military.

More than 100,000 people from around the world gathered in the town famous for being the birthplace of Jesus, up from 50,000 the previous year. The increase in tourists is likely due to decrease violence between Palestinians and Israel in recent years.

“This is the first year that Bethlehem has hosted so many people,” remarked Bethlehem city official George Saade to Agence France-Presse.

The number of pilgrims this Christmas surpassed the estimated 90,000 and marks the third straight year in a row that Bethlehem has seen record-high tourists during the holiday. Thousands of pilgrims waited in line to view the dimly lit grotto said to be the birthplace of baby Jesus.

Included among the pilgrims are about 500 Christians from Gaza Strip who were granted a rare holiday entry permit by Israel. There are about 3,500 Christians out of Gaza’s 1.5 million population.

Palestinian officials said all 24 of Bethlehem’s hotels were fully booked. Business owners in Bethlehem, who depend heavily on tourism for income, are happy to see the influx of visitors.