Nazareth celebrates Annunciation with a crowded procession, to the strains of Scottish bagpipe 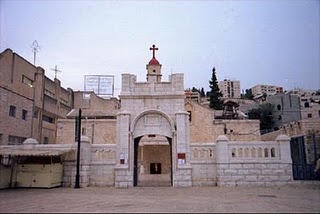 The Annunciation was celebrated in Archangel Gabriel’s Church, which is the only Orthodox church in the Israeli city of Nazareth. Arabian scouts participated in the divine service, celebrated in four languages, and in the procession with cross.

The Interfax-Religion correspondent reported that celebrations culminated in a bright and unusual cross procession along the neighboring streets. About 200 scouts headed the procession and played Scottish bagpipes. Clergymen with Patriarch Theophilos of Jerusalem followed them.

From 1917 to 1948, Palestine was a mandate of Great Britain, which influenced not only its architecture. For instance, the British introduced the scout movement here.

It is also notable that scouts played Soviet tunes among others, for instance, a famous Red Army song Polushko-Pole. The local guide explained Interfax that “it is a result of Communist influence actively promoted in 1950-s among local Arab population.”

Before the procession with cross, Patriarch Theophilos celebrated the Divine Liturgy in the church. The service was celebrated in four languages: Russian, Arab, Greek, and Romanian, and was attended by several thousand believers including local residents and pilgrims from Russia, Ukraine, Byelorussia, Serbia, Romania and other countries.

The Nazareth church's main holy shrine is its spring. According to local tradition, it was here that Archangel Gabriel appeared to the Holy Virgin and announced the Nativity of the Savior.