XENO – Who Is the Stranger? 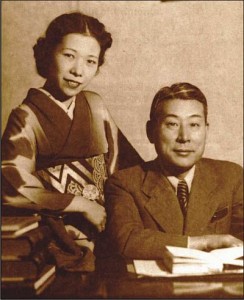 The Sugiharas - Orthodox Christians
In this story Fr. John Bakas relates the story of an Orthodox Christian convert who saved more Jews from certain death during the Holocaust than Oscar Schindler. We [Journey to Orthodoxy] will have more on Chiune Sugihara in the future.

In Greek, the word, “xeno,” denotes someone who is a “stranger,” someone that is not one of us, someone outside our culture. This is the root of the the word “xenophobia,” fear of stranger. But it is also the root of a beautiful Greek Tradition that transforms that word, “xeno,” into a virtue that participates in the divine, “philoxenia,” love of stranger. The reason this tradition, “philoxenia,” participates in the divine is because the scriptures tell us,

You see, at just the right time, when we were still powerless, Christ died for the ungodly [those estranged to God]. Very rarely will anyone die for a righteous person, though for a good person someone might possibly dare to die. But God demonstrates his own love for us in this: While we were still sinners [strangers to God], Christ died for us (Romans 5:6-8).

In the Gospel of Matthew 25:35-45, Christ tells us that at the Final Judgment, our entry into Paradise will depend on how well we welcomed the stranger (“xenos”), because He identifies Himself with the xeno.

In the following story, our central characters, Mr. and Mrs. Chiune Sugihara, participate in and embody that divine virtue of “philoxenia,” the beautiful Greek Tradition of welcoming and loving the stranger.

Nothing is more un–Christian and frankly disturbing than to hear someone in church foolishly saying,

“What’s that ‘black person’” or ‘Mexican’ doing here, this is a Greek church. They should go to their own church.”

It makes us uncomfortable seeing these comments in print but many of us Orthodox Christians have heard similar remarks made over the years in some of our parishes. Orthodox Christianity is universal. It has believers of every ethnic and racial background and encompasses a multiculturalism expressed in one true and undefiled faith. It is the “One Holy Catholic and Apostolic Church” as clearly articulated in the Nicean-Constantinopolitan Creed we recite in the Divine Liturgy every Sunday. St. Paul states it clearly in his Epistle to the Galatians 3:28:

It was never made clearer to me than in mid-November 1997. I received an invitation from then-Mayor Richard Riordan to attend a reception at his residence honoring Yukiko Sugihara of Japan. It must be a mistake, I thought. What do I have to do with this unknown person and why is the mayor inviting me to an event honoring someone whose name was not a part of my universe?

Being new to L.A. and wanting to get involved in the community, I accepted the invitation. It would give me an opportunity to get to know the mayor close-up, since I would need his help with projects I had in mind for the St. Sophia Neighborhood. The mayor greeted me enthusiastically and led me directly to meet Mrs. Yukiko Sugihara. I passed through a crowd of at least 100 people recognizing a few clergy and rabbis I had met on other occasions.

Mrs. Sugihara was a dignified elderly lady of small stature with kind, humble eyes and a gentle smile. She spoke no English and, through an interpreter, I was introduced to her as the Greek Orthodox priest of Los Angeles. I extended my hand to her in greeting. She took it and kissed it in the Orthodox manner. I was moved, shocked and at the same time humbled to the core by this act from a person I perceived to be as far away from Orthodoxy as I could imagine.

Before I could speak with her, the mayor explained that the reason for the reception was to honor this lady and her late husband, Chiune Sugihara. Mayor Riordan told the following story: In March 1939, Japanese Consul- General Chiune Sugihara was sent to Kaunas, Lithuania, to open a consulate service. Kaunas, the temporary capital at the time, and was strategically situated between Germany and the Soviet Union.

Hitler invaded Poland on Sept. 1, 1939 and Britain and France’s declared war. Chiune Sugihara had barely settled down in his new post when a wave of Jewish refugees streamed into Lithuania. They brought with them chilling tales of Nazi atrocities against the Jewish population. They escaped from Poland without possessions or money. One summer morning in late July 1940, Consul Sugihara and his family awakened to a crowd of Polish Jewish refugees gathered outside the consulate. Desperate to flee the approaching Nazis, the refugees knew their only path lay to the east.

If Consul Sugihara would grant them Japanese transit visas, they could obtain Soviet exit visas and race to possible freedom. Sugihara was moved by their plight, but had no authority to issue hundreds of visas without permission from the Foreign Ministry in Tokyo. He wired his government three times for permission to issue the visas and was denied three times.

Sugihara had a difficult decision to make. He was a man trained in the strict and traditional discipline of the Japanese and was bound by the traditional obedience he had been taught all his life, but he also was a religious man taught to help those in need. He knew that if he defied his superiors’ orders he would be fired and disgraced and would result in extreme embarrassment and financial hardship for him and his family. Chiune and his wife feared for their lives and those of their children.

In the end, they followed their consciences and religious beliefs.

For 29 days Mr. and Mrs. Sugihara sat for endless hours writing and signing visas by hand. Hour and hour, day after day, for these three weeks, they wrote and signed more than 300 visas a day, normally a month’s work. Hundreds of applicants became thousands as he worked to grant as many visas as possible before being forced to close the consulate and leave Lithuania.

The consul continued issuing documents from his train window until the train departed for Berlin on Sept. 1, 1940. After receiving their visas, the refugees lost no time in getting on trains to Vladivostok. From there, most continued on to Shanghai, China. Thousands of Polish Jews with Sugihara visas survived. As many as 6,000 refugees reached Japan, China and other countries in the following months.

They had escaped the Holocaust.

Through a strange twist of history, they owed their lives to a Japanese man and his family. The Japanese government unceremoniously dismissed Chiune Sugihara from the diplomatic service. His career as a diplomat was over. For the last two decades of his life, he worked as a manager for an export company. This was his fate because he dared to save thousands of human beings from certain death.

More than 70 years after those 29 fateful days in 1940, there may be more than 40,000 who owe their lives to Chiune and Yukiko Sugihara. It was not until 1969 that Sugihara was found by a man he had helped save, Yehoshua Nishiri. Soon, hundreds of others came forward and testified to the Yad Vashem (Holocaust Memorial) in Israel about his life-saving acts of courage.

After gathering testimonies from survivors around the world, the Yad Vashem Martyrs Remembrance Authority in Jerusalem, in 1985, bestowed upon him Israel’s highest honor, “Righteous among the Nations.” Being near death and too ill to travel to Israel, his wife and son accepted the honor on his behalf.

Forty–five years after he signed the visas, Sugihara was asked why he did it. He liked to give two reasons:

“They were human beings and they needed help,” he said.

The other reason he gave and he was always fond of saying it,

“I may have to disobey my government but I can’t disobey God.”

He told the journalist interviewing him that he was an Orthodox Christian. Now I understood why Mayor Riordan had invited me to the reception and why Mrs. Sugihara, Greek Orthodox herself, kissed my hand.

Events like these remind me that there is no such person as a Xeno. God loved the world that he gave His only begotten Son that whoever believes in Him shall not perish but have life everlasting. 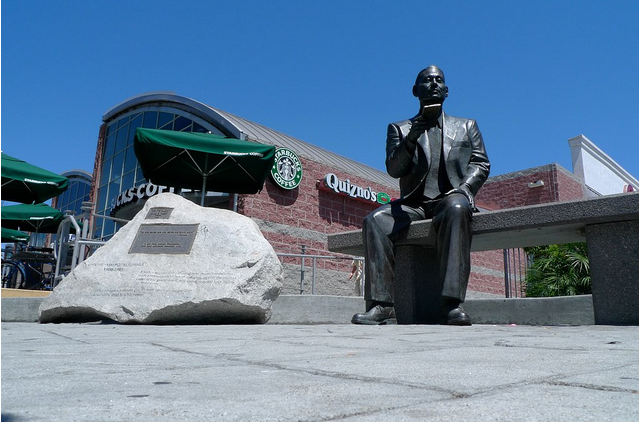 When in L.A., stop by “Little Tokyo” and there you will see a life–sized statue of Orthodox Christian, Chiune Sugihara, dedicated in his honor.
Journey to Orthodoxy