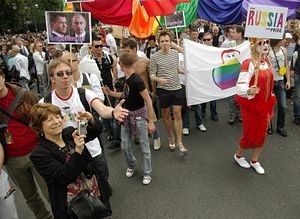 A Gay Pride parade in Berlin, calling on Russia to legalise gay marriage. A proposed Gay Pride parade set for ten days' time in Moscow has been banned by city authorities.
Moscow City Authorities have banned organisers from holding a gay pride parade scheduled to be held in two weeks time, saying the event posed a risk of ‘public disorder’.

The organisers of the event, which had been originally set for May 28, said today they had received a statement from the city hall advising them that their event would not be given the go-ahead – dashing the hopes of organisers who had been traditionally turned down by a previous administration.

Luzhkov was fired by President Dmitry Medvedev in September and replaced with Sergi Sobyanin, who had made certain concessions to the group, but who has again refused to allow a parade to be held.

Moscuvite authorities told the group they had received letters from members of religious and Cossack groups who feared that the events could lead to “a wave of protests, which could grow into group violations of public order,” organisers said.

The denial of permission for this year’s parade comes in spite of a finding of the European Court of Human Rights which ruled earlier this year that Moscow had acted illegally in banning three successive gay pride parades between 2006 and 2008.