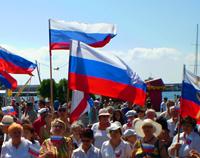 About 1,000 Muscovites identifying themselves as Orthodox believers have gathered on Bolotnaya Square in Moscow on Saturday for a rally against gay pride parades and globalization, Alexander Lapin, the head of the Moscow branch of the Orthodox organization People's Council, told Interfax.

Some 85% of them are young people, that is, activists under 30 years old.

The people who have come to the rally have unfolded banners and posters. "Some of them say, "We Support Gay Parade Ban", "For Protection of Traditional Family", and "We Are Against Joining WTO".

Police deployed on Bolotnaya Square to maintain public order are not intervening, he said.