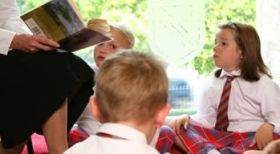 NEARLY 2,000 children in Scottish schools and nurseries were reported to their local education authority for "hate crimes" in the last three years, according to official statistics.

Many of those accused of homophobia, racism and sectarian bigotry were merely toddlers.

The figures were revealed in response to a Freedom of Information request.

One expert described branding children at nursery as "racists" when they have only just learned to speak as "ridiculous".

The figures reveal a total of 1,913 incidents of discriminatory or prejudicial behaviour were reported in Scottish nursery, primary and secondary schools in the three-year period.

The vast majority were for racism and 1,150 involved children at primary school. Out of the 539 incidents logged in Glasgow, almost two-thirds were in primaries while nine involved toddlers at nursery.

The overall total is likely to be even higher as five councils either refused to respond to the request for information or did not do so in the six weeks they are legally allowed to take.

A Scottish Government spokeswoman said the Equality Act 2010 places a duty on local authorities to actively deal with inequality.

In virtually all the instances reported, the "offending" child's parent, parents or legal guardians were informed, while in others, pupils were suspended or excluded.

In a handful of cases the police were called in.

Josie Appleton, of the Manifesto Club, a civil liberties group, said: "The obligation on teachers to report these incidents to authorities is a waste of time.

"Most are just kids falling out.

They don't need re-educating out of their prejudice.

"It also undermines the authority of teachers, who should be left to set the moral tone in classrooms themselves."

She added: "Children at nursery have only just learned to speak, so the idea that they can be racist or homophobic is utterly ridiculous.

"It's entirely appropriate for teachers to deal with these incidents, but in the vast majority of cases it should end there."

In England, following the introduction of the Race Relations Act 2000, schools were placed under a duty to report all racist incidents to their local authority, although many aspects of the law have been repealed south of the Border.

In Scotland it is left up to individual councils to decide what to so, but the Scottish Government "encourages councils" to record the information.

Many authorities, including the biggest, Glasgow City Council, record only allegations of racist abuse.

Others ask schools for reports on racist as well as sectarian and homophobic confrontations.

One council, North Lanarkshire, does not record the data.

It was revealed last week that Central Scotland Police had reported three children from a high school in Stirling to the procurator-fiscal for alleged racist abuse towards university students on buses.