The Intercession of the Most Holy Mother of God 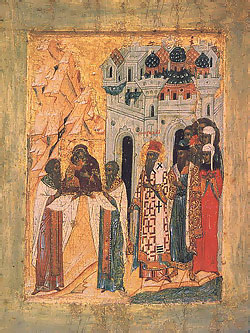 The Meeting of the Icon of the Vladimir Mother of God.
In the summer of 1395, an event occurred which left a deep mark in the spiritual and historical life of the Russian people, and which became an eternal example of faith and hope in the Providence of God, and in the intercession of the Most Pure Mother of God.

The news reached Moscow that moving from the south to the city was Tamerlane's army—the army of an invincible and cruel conqueror. He was literally invincible—throughout his long life, he never suffered a single defeat. Tamerlane had conquered Persia, Iraq, Armenia, Azerbaijan, Mesopotamia, Georgia, India, and Syria. By the end of his life in 1405, his territory stretched east to west from the Black sea to the banks of the Ganges, and north to south from the Aral Sea to the Arabian Sea.

In 1395, this terrible conqueror of nearly all of Asia Minor and the Caucasus was advancing upon Russia, had reached the borders of Riazan, razed the town of Yelets, and turned towards Moscow, nearing the upper Don River. Grand Prince Vasily Dimitrievich courageously went out with his Muscovite army to Kolomna to meet the enemy, but everyone knew that their forces were not equal.

At that great and decisive moment in history, not only was the continued existence of Moscow under question, but also of the entire Russia nation. Metropolitan Cyprian of Kiev and All Russia, the primate of the Russian Orthodox Church, understood this better than anyone did. After blessing Prince Vasily to go to war, he called all the Muscovites to repentance, fervent prayer, and fasting. Then, by divine inspiration, he sent ambassadors—priests and boyars to Vladimir for the greatest sacred shrine of Russia—the Vladimir icon of the Mother of God.

The icon was carried to Moscow in a grandiose procession that lasted ten days. During the entire way, the icon was surrounded by a huge crowd of people, who knelt before it with continual cries of "Mother of God, save the Russian land!" The people of Moscow with the Metropolitan at the head, the entire family of the Grand Prince, clergy and boyars met the icon of the Most Holy Theotokos on Kuchkova field.

Today that road upon which the procession came from Vladimir is called Sretensky, (from the Slavonic word meaning "meeting"), and the gates that were erected later on the site of Kuchkova field were called the Sretensky Gates.

All of Russia prayed during those days before the icon of the Mother of God to be saved from inevitable destruction.

And a miracle happened.

Tamerlane reached the town of Yelets, and for a reason unknown to historians did not go further to Moscow, although a nearly unprotected city lay before him—easy loot and military glory. This happened on August 26, 1395.

The Chronicles, however, explain this strange move thus: in the same hour that the inhabitants of Moscow met the icon and prayed before it, Tamerlane was dozing in his tent. Suddenly in a dream, a Majestic Lady appeared surrounded by a radiant light, who threateningly told him to leave the threshold of Muscovy. Awakening in terror, Tamerlane called his advisors and inquired what this vision meant. They answered him that the Majestic Lady is the Mother of God, the great intercessor for Christians. That is why, according to the Chronicles, the frightened Tamerlane turned toward the south the next day.

On the place of the meeting of the Vladimir Mother of God, Metropolitan Cyprian founded the Sretensky Monastery, and on August 26 (September 8 according to the civil calendar), this event is still celebrated as the day that Moscow and Russia were saved from Tamerlane.

This dramatic event is well known to the Orthodox, but the rest of the story is less known, although the outcome was also the result of the people's prayers, and amazingly influenced the whole course of Russian history. Turning from Moscow to the south, Tamerlane began his grandiose crushing of the Golden Horde. All the cities of the steppe, at enmity with Russia at the time, were looted and destroyed over the course of the year. Khan Tokhtamysh in 1382 had burned Moscow out of revenge for his defeat at Kulikovo, and run off to Lithuania. After their total defeat the Golden Horde in fact cease to exist as a steppe civilization and united nation. For Russia, these events were of colossal significance.