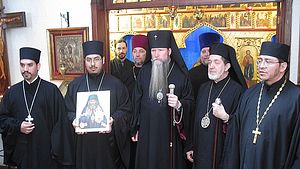 On Sunday, December 4, 2011, the feast of the Entrance into the Temple of the Most-Holy Mother of God, the fifth anniversary of the establishment of Holy Trinity Skete in Mexico City, Mexico, was celebrated.

His Eminence Archbishop Kyrill of San Francisco and Western America of the Russian Orthodox Church Outside of Russia, whose diocese includes this skete, accompanied by Protopriest Yaroslav Belikov, Protodeacon Nicholas Triantafillidis and Reader Peter Karakozov, attended the celebrations.

On Friday, December 2, the delegation flew to Mexico. Archbishop Kyrill was greeted at the airport in the VIP hall with the traditional bread and salt by Hegumen Nektarios, Hierodeacon Christopher and Hierodeacon Arseny along with parishioners of Holy Trinity Skete. Fr Nektarios welcomed his Ruling Bishop to Mexico. The visitors immediately headed to Holy Resurrection Cathedral, where His Grace Bishop Alejo of Mexico (Orthodox Church in America) met them. Archbishop Kyrill gave Vladyka Alejo an icon of St John of Shanghai and San Francisco containing a portion of his relics. Vladyka Alejo expressed his thanks for the visit despite their busy schedule, and was particularly happy that the Russian Orthodox Church Outside of Russia expressed its attention in the person of Vladyka Kyrill, and that the unity of the Church is strengthening in this beautiful land.

Attending dinner that evening was His Eminence Metropolitan Athenagoras of Mexico (Constantinople Patriarchate), who discussed the joys and difficulties of his archpastoral service here. Metropolitan Athenagoras noted the massive exodus from the Roman Catholic Church by many Mexicans. A majority of the clergymen and laity under his omophorion were natives who yearned for the spiritual nourishment of the Orthodox Church. Vladyka Athenagoras also brought up the machinations of uncanonical “bishops” who try to represent Orthodoxy among the Mexicans. Archbishop Kyrill gave him, too, an icon of St John with his relics and thanked the Metropolitan for his assistance to Fr Nektarios, who had been in his spiritual care for over twenty years.

On Saturday, December 3, Archbishop Kyrill officiated at Divine Liturgy at Holy Trinity Skete, and ordained Hierodeacon Christopher to the priesthood. During the reading of the Hours, Artemy Yakimov and Nestor Belmonte were ordained as readers.

After Liturgy, Vladyka Kyrill and his delegation visited the Catholic Archbishop Pierre Christopher at the Papal Nuncio. During the visit, the legal situation of the Russian Church was explained.

The Georgian Ambassador to Mexico, Malkhaz Mikeladze, invited the clergymen to his private residence for lunch. It has not yet been a year since Georgia opened its Embassy in Mexico, and the Ambassador discussed his new position and challenges. He was particularly happy to find an Orthodox Church where he could pray, and spoke highly of Fr Nektarios. Vladyka Kyrill shared his joy at the fact that it is in the Church that we find peace, and expressed hope that the present tensions between Russia and Georgia would soon be overcome.

At the present moment, the Skete occupies a small house where a church was set up in three large rooms. That evening, during all-night vigil performed by Fr Yaroslav, a multitude of parishioners was in attendance. The singers, not yet entirely accustomed to the order of services, invited Peter Karakozov to lead them. Naturally, many were caught off guard at the presence of an archbishop: this was the first time such a high-ranking hierarch attended vigil at their church, but everyone sang quietly, and the service was conducted with due decorum.

On the feast day of the Entrance of the Most-Holy Mother of God, Sunday, December 4, the Skete marked the fifth anniversary of its founding within the bosom of the Russian Church Abroad. During Divine Liturgy, Archbishop Kyrill awarded Hegumen Nektarios the right to wear the palitsa. Vladyka Kyrill also ordained Hierodeacon Arseny as a hieromonk, and, during the reading of the Hours, and ordained servant of God Vladimir Leshin as a reader.

The church could not contain all the worshipers, and many prayed outside, through the open door. Since there are few Orthodox churches in Mexico, in attendance were Serbs, Mexicans, Russians, Ukrainians, Belarussians and Greeks. Among them was Consul General of Ukraine, Artemy Alexandrovich Vorobiev. Thanks to the powerful and beautiful voice of Protodeacon Nicholas, everyone could hear the words of prayer. The angelic singing of the choir under the direction of Alla Popova adorned the celebration, and the worshipers were especially inspired to prayer by the presence of their ruling bishop, whom they were seeing for the first time in their church.

In his sermon, Vladyka Kyrill explained the meaning of the Mystery of priesthood. The two ordinations abundantly poured forth Divine grace upon the Russian-Mexican community. Ordination imposes responsibility upon the new hieromonks, but the enemy of mankind does not slumber, but will send them temptations. Vladyka called upon everyone to pray for Fathers Christopher and Arseny, and to give them support.

Vladyka Kyrill gave an icon of St John of Shanghai and San Francisco with a portion of his relics to Hegumen Nektarios, as well as an omophorion that St John would wear during divine services. This was given to the monastery for veneration and consolation, that the believers would feel a closer bond with the holy man of San Francisco and with their Church.

Some of the parishioners said this celebration brought a Paschal joy to them.

Metropolitan Athenagoras then joined the trapeza, as did Plenipotentiary Ambassador of the Russian Federation to Mexico, Valery Ivanovich Morozov; Plenipotentiary Ambassador of Serbia, Zoran Stanojevic, and Consul General of Ukraine, Artemy Alexandrovich Vorobiev. Archbishop Kyrill thanked all those in attendance for their prayers and warm reception. The archpastor raised a toast to the health of His Holiness Patriarch Kirill, their spiritual leader, who strengthens Russian Orthodoxy throughout the entire world; His Eminence also noted the support that Mr Morozov gives to Holy Trinity Skete, and thanked its abbot. Finally, he told the worshipers that they must be very grateful to God that the Lord sent them Fr Nektarios, a remarkable pastor, spiritual father and organizer.

Vladyka Kyrill also said a few words about Russia, emphasizing that Russian people, wherever they might be, must remember their Fatherland, their language and culture, that they must serve their people, striving to manifest their ideals in their own lives.

Hegumen Nektarios then thanked Archbishop Kyrill for visiting his Skete, and explained the meaning of an archpastor’s service.

In addition to the church in the nation’s capital, Fr Nektarios also ministers to five other communities in the large cities of Mexico. Now these communities, with the help of Hieromonks Christopher and Arseny, will receive more frequent visits by Orthodox clerics, and believers will have a wealthier liturgical life.

On Monday, December 5, Archbishop Kyrill returned to San Francisco with the promise of visiting this southern corner of his diocese more often.