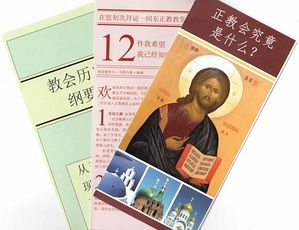 In Khabarovsk, 1,000 copies were printed of pamphlets in Chinese, which outline the basic teachings of the Orthodox Faith. These leaflets will be available in parishes, which are often visited by tourists from China. It is also planned to distribute them among the migrant workers who live and work in the city and region.

Leaflet layouts about Orthodoxy are provided by the parish priest Dionisy Pozdnyaev of St. Peter and Paul in Hong Kong (China) , who visited Khabarovsk diocese in May 2012. In a personal meeting with Metropolitan Ignatius of Khabarovsk and Amur, Father Dionisy proposed collaborative projects with Priamurskoj (lying close to Amur) metropolis in cooperation with our closest neighbor - China.

Among other things, Father Dionisy proposed a project of brochures in Chinese, which outlines the basic tenets of the Orthodox Faith. As Father Dionisy himself noted, these leaflets could be given to the Chinese, so that they being on the territory of Russia, could become more familiar with our traditional culture.