Bulgarian bishop says Communism was bad for the Church 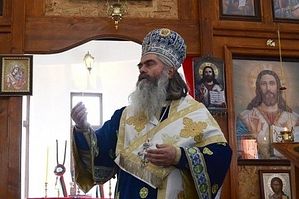 September 9 1944 is not a happy day for the Bulgarian Orthodox Church, bishop Kiril declared from Varna Sunday, in the first ever such admission of a Bulgarian Holy Synod member.

Sunday marks the 68th anniversary since the Communist take-over with the country polarized between seeing the emblematic date of September 9 as the date of Bulgaria's anti-fascist uprising in 1944 or the beginning of the sinister Communist regime.

According to Kiril, who is seen as being among the top contenders to replace the ageing Patriarch Maxim, 97, the services of the Church have been restricted and repressed by the Communist regime, with atheism remaining the most damaging legacy of the 45 years of Communist rule.

The Bishop of Varna and Veliki Preslav further noted the need of finding more information on clergy who have become victims of the repressions, killed for keeping their faith in God after September 9 1944.

Speaking for the Bulgarian National Radio, BNR, Kiril said the Bulgarian Church has not suffered as much as those of Russia and Romania, pointing out in the latter the regime destroyed 300 temples in Bucharest only, but nevertheless much of Holy Spirit was lost in Bulgaria as well.

When asked if he would admit that after September 9 1944, the Bulgarian Orthodox Church was fully controlled by the Communist regime, the Bishop, who was exposed at the beginning of the year as agent of the Communist State Security, DS, working under the aliases "Kovachev" and "Vladislav," stated the following:

"I would not say under control. I firmly reject this, because there were services. Services inside the churches were not banned. The ban involved services, processions and even burials outside the temple. The activities were simply restricted."

In January 2012, Bulgaria's so-called Files Commission – a panel investigating the Communist era secret files, exposed eleven out of a total of fifteen Bulgarian Metropolitan bishops as former agents of the Communist State Security.