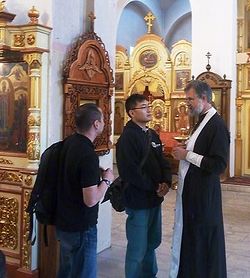 A priest discusses the faith with Tokashi Kishi before his baptism.
On September 12th in St. Nicholas Church of the Russian Orthodox Church Missionary Department, with the blessing of the Department President Metropolitan John of Belgorod and Stariy Oskol, the sacrament of Baptism was performed over Japanese fighter Tokashi Kishi, reports ruskline.ru. Tokashi Kishi’s path to Orthodoxy is very interesting and it shows us once again that God's Spirit breathes where He wills.

Since his school years, Tokashi has been practicing various kinds of martial arts. In the process he started to gradually realize that the knowledge of fighting techniques and methods alone could not satisfy his desire to become really strong. This made him wonder where the strength comes from and who grants it as he felt it is not just the result of training and exercise. Muscles only serve as a gateway for the power, but not its source, which rather lies outside a person. Tokashi turned to the study of traditional Eastern religions, especially Buddhism and its teachings about life as a kind of road. Where does this road lead a person, and where is he going to get the strength to complete the journey? Tokashi had many good Buddhists teachers, but he never received clear answers from them. He turned to Christianity, about which he had read much in high school. But Christianity seemed to be just another religious and moral teaching that only offers a set of rules. It seemed to be quite similar to Buddhism. 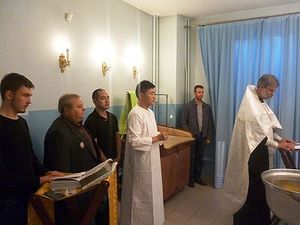 The baptism of Tokashi Kishi.
But along with his religious quest, he remained interested in various forms of combat and martial arts. In his search he came across the Ryabko martial arts system of ancient Russia. It immediately came across as unusual, not similar to any of the martial arts he previously learned. It was not the techniques of unarmed combat that were unusual, but the way the fight itself went. Fighter’s spirit and character play a vital role in many types of martial arts, while aggression is one of the main features and attributes of a battle. The aggressive frame of mind is where marshal artists derive their energy and strength. Knowing that, Tokashi was immediately impressed by the fact that in the Ryabko system the aggression was not present. However, the defense techniques were highly effective. He arrived to Russia and began to participate in trainings. Tokashi saw what he had never seen before among his fellow marshal artists—a high degree discipline of the spirit, unusual endurance and stamina, and once again a complete lack of aggression against the enemy. Socializing and exercising with his Russian colleagues, Tokashi felt the growing desire to get to know their religion and faith. The simple explanations of his new friends helped him realize that the main thing is faith in the Lord Jesus Christ, following His teachings and commandments, and communion with Him through prayer and the Sacraments.

After returning to Japan, Tokashi learned more about the teaching of the Orthodox Church; he also read the Orthodox Catechism in Japanese. The desire to become an Orthodox Christian overwhelmed him and became even stronger. He realized that the Lord Jesus Christ is the God Whom he sought and that He came to Earth for the salvation of everyone, including him—Tokashi Kishi. He is his God and Father, He gives him the strength and the Source of his life, both this life and eternal life. 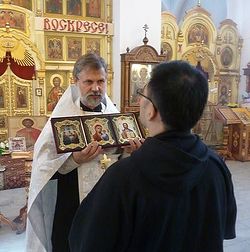 Tokashi Kishi.
On his next visit to Russia, Tokashi announced his desire to be baptized into the Orthodox faith. Founder of the martial arts system of ancient Russia Mikhail Vasilyevich Ryabko told Metropolitan John about Tokashi and his wish to become an Orthodox Christian. With the blessing of His Eminence Metropolitan John, the Rite of Baptism was performed by priest Valeriy Bulannikov. In Baptism Tokashi Kishi took the name of the Holy Prophet the Forerunner John.

Remarkably, the Japanese fighter’s Baptism took place just before the visit of His Holiness Patriarch of Moscow and All Russia to Japan. The first person to preach the Orthodox Christian faith in Japan one hundred and fifty years ago was St. Nicholas of Japan.

Let us hope and pray that the light of the Christian faith will continue to enlighten the hearts of those who seek the true God in Japan and all over the world.