A Living Tradition continues: The celebration of Theophany in Mexico City 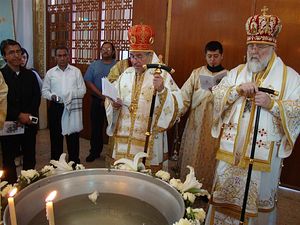 In what has become a decades old “Living Tradition,” clergy and faithful alike filled the cathedral for the celebration of the festal Divine Liturgy and the Great Blessing of Water.

“For many years, His Eminence, the late Archbishop Dmitri of Dallas—who is well loved by the local clergy and people—made it a point to visit Mexico City at this time of year to strengthen the ties that unite the Exarchate with the rest of the Orthodox Church in America,” said Archbishop Benjamin. “Especially moving this year was the appearance of local faithful dressed in traditional costumes representing the Three Kings, whose visit to the new-born Christ is celebrated throughout Mexico on the same day.”

Children especially relish the “Fiesta de los Reyes Magos”—the Feast of the Three Kings—during which the Magi, rather than Saint Nicholas or “Santa Claus,” visit them, laden with toys, candy and other gifts. On the eve of the feast, children leave their newly cleaned shoes out for the Three Kings to fill.

At the conclusion of the Great Blessing of Water, commemorating the Baptism of Our Lord in the Jordan, the children took great delight in the gifts they received from the hierarchs, “on behalf of” the Magi!

The celebration also marked the 41st anniversary of the establishment of what today is the Orthodox Church in America’s Diocese of Mexico, which traces its origins to the early 20th century, curiously through what was known as the Mexican National Catholic Church. Distinct from the nation’s Roman Catholic Church, the Mexican National Church emerged during the Revolution, when antagonisms against the Roman Catholic Church were aroused in reaction to its historic association with the Spanish colonialists. Some of the first laws of the new Mexican Republic were antireligious. In 1917, all Church properties were nationalized, many churches were closed, monasteries were abolished and the communities dispersed, and clergymen were required to obtain licenses to function—measures not unlike those imposed at the same time as a result of the Russian Revolution. Several attempts were made to establish a “national church.” In 1926, a Roman Catholic priest, with government support, was made head of the Independent Old Catholic Church of North America, and the Mexican National Catholic Church was founded.

The community thrived under the patronage of the government, and at once extended its jurisdiction to Mexican communities in Texas. The National Church continued as an “Old Catholic” community until Father José Cortes y Olmos was appointed its bishop in 1961. He and his clergy gradually became convinced, through study and reflection, that the Old Catholic ecclesiological principles did not conform to the criteria of the One, True, Catholic Church. They came to identify with Orthodox Holy Tradition, and adopted the designation “Iglesia Ortodoxa Catolica en Mexicao” (Orthodox Church in Mexico).

In 1965, Bishop José and his clergy contacted the then-rector of Saint Seraphim Church in Dallas, TX, Father Dmitri Royster, who had been instrumental in converting many Mexicans to Orthodoxy and was translating Orthodox liturgical services into Spanish. After Father Dimitri’s consecration to the episcopacy in 1969 and the granting of autocephaly the following year, Bishop Dmitri presented the case of the Orthodox Church in Mexico to the hierarchy of the Orthodox Church in America. As a result of numerous exchanges and visits, the Holy Synod sent Bishop Dmitri to visit Mexico officially and to report on his findings. This report was studied by the OCA’s Department of Canonical Affairs, which recommended acceptance of the Mexican communities into the Orthodox Church.

In 1971, Bishop José petitioned for the acceptance of his community into the Orthodox Church in America. He and other priests of his community were received in their Roman Catholic rank of priest, while an estimated ten to twenty thousand faithful were also received into the Orthodox Christian faith. Father José studied at Saint Vladimir’s Seminary prior to his consecration as Bishop of Mexico City, which took place at Holy Virgin Protection Cathedral in New York City on April 22, 1972. Despite countless obstacles, what had become the Exarchate of Mexico continued to grow through the establishment of additional missions and conversions.

On January 28, 1983, Bishop José fell asleep in the Lord after a relatively short bout with cancer. His Beatitude, Metropolitan Theodosius, presided at the funeral service in Mexico City on February 1, 1983.

Archbishop Dmitri continued to oversee the life of the Exarchate until 2005, when a successor to Bishop José was found. On May 28 of that year, in services celebrated at Saint Tikhon’s Monastery in South Canaan, PA, Archimandrite Alejo (Pacheco-Vera) was consecrated as an auxiliary to Bishop Dmitri. On October 16, 2008, he was elected as the ruling bishop of the Exarchate. His Beatitude, Metropolitan Jonah, presided at his installation at Mexico City’s Ascension Cathedral on January 18, 2009. The Exarchate subsequently was granted full diocesan status.

Editor12/14/2014 9:38 am
Alexander, the Holy Trinity Monastery is in the jurisdiction of the Russian Orthodox Church Outside of Russia (ROCOR), and Archimandrite Nektary is the abbot of that monastery. The Cathedral of the Ascension talked about in this article is under the jurisdiction of the Orthodox Church in America, the Church granted autocephaly by the Moscow Patriarchate back in Soviet times. The Holy Trinity Monastery is more well known by the Russian diaspora there.

Alexandr Olegavich Saitcevsky12/13/2014 1:40 am
I am quite confused because we go to the Holy Monastery of the Trinity here. It is headed by his Eminence, Arcmandrite Nektariy. hE HEADS THE rUSSIAN oRTHODOX cHURCH AND WE ATTEND THE hOLY LlITURGY on Sundays. He opened the Monastery some 6 years ago. I would like to have your coments to this.
×