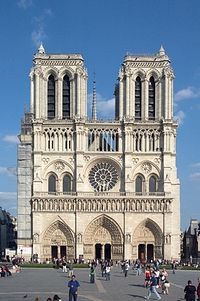 Activists from the feminist movement FEMEN, who conducted a stunt in Notre Dame de Paris in February 2013, may be sentenced to prison terms and be given large fines.

"According to the official response I have received from the French Foreign Ministry, they are facing up to one year in prison and a 10,000 euro fine for insulting believers' feelings," Yaroslav Nilov, the head of the State Duma committee on public associations and religious organizations, said on Russia's Spas television.

Nilov said the feminists are facing up to ten years in prison and a fine in an amount of up to 200,000 euros for the damage they have inflicted to the Norte Dame property.

According to earlier reports, topless FEMEN activists conducted a stunt in Notre Dame de Paris marking the resignation of Pope Benedict XVI. They played a "funeral march" to the pope and attacked believers and security guards in the cathedral.

The stunt is reminiscent of the scandalous stunt conducted by three Pussy Riot activists in the Christ the Savior Cathedral in Moscow on February 21, 2012.

Two of the girls, Nadezhda Tolokonnikova and Maria Alyokhina, were later sentenced to two years in prison. Yekaterina Samutsevich, the third activist, received a suspended prison sentence. The girls have denied their guilt.