The Myrrhbearing women and the Christian women of today

Elder Sofian Boaghiu of Antim Monastery (now with the Lord) was sentenced by the communists (in 1958) to 15 years of hard labor in the concentration camps for keeping the true Orthodox Christian faith and refusing to become atheist. 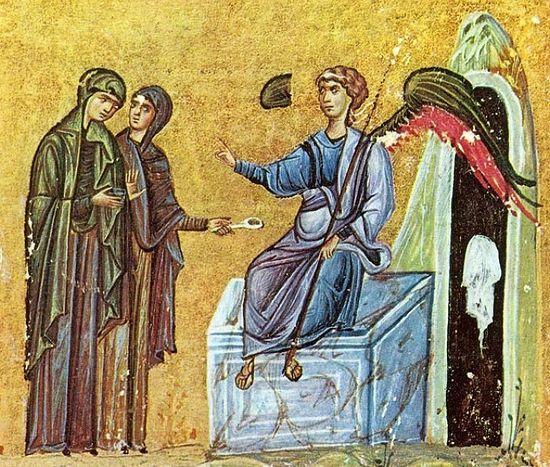 As you know, the third Sunday after Easter is the Sunday of the Myrrhbearing women, or the Sunday of the faithful women, keepers of Christian family. You should be joyful that you partake of this special honor from our Resurrected Lord. And through our most pure Mother Theotokos and the Holy Myrrh-bearing women, you have a Sunday a year when you are especially honored. May the Lord multiply in you the grace and gifts of the Holy Spirit and may the gift of Christian love abide truly in you, in order that you may become maintainers of Christian’ warmth and harmony in your family. For many families today are met with disaster… as you know better than me, so I will not speak about it.

And those of you (faithful women) who come to church and pray to the Lord--here and in your home--if you pray attentively with love, humility and perseverance, you’ll receive help from God and be comforted in your troubles.

The young girls and daughters can bring as myrhh to our Lord Jesus Christ, their clean life--virginity, their prayers and obedience to thier parents. All (college) students and young women who come to church regularly, can also bring to Christ our Saviour their mirth of good fragrance: the zeal for good deeds, mercy and charity towards those in suffering and obedience to their spiritual father.

The Christian mothers will offer our Master their most precious mirth, which is the birth, raising and education of children in the fear of God. But also the older mothers, the grandmothers and widows that are always present in the holy churches of God, may bring their ointment of tears and prayers as they piously keep the Orthodox faith and legacy passed on by our ancestors.

Behold, all daughters of the Orthodox Church, today you are the offspring of the Holy Myrrhbearing.

women when you hold in your heart the good fragrance of faith, prayer and Christian love. If you’ll only run with devotion to church along with your children, as the Holy Myrrhbearing women once ran to the Holy Tomb of our Saviour.

On the Holy Myrrhbearing women I can also tell you that there were times in the life of our Saviour Jesus Christ when they were more courageous than the Apostles. Such, when our Lord was taken-up by the Jews in the Garden of Gethsemane, when all the Apostles--with the exception of St. John the Evangelist--left Him, and Peter betrayed Him by swearing three times that he does not know Him. But the women followed Him both to the council (of Pilate) and on the road to Calvary. They accompanied Him when He fell under the heaviness of the Cross, and Veronica with her veil wiped his tears, and her veil became the first icon bearing the image of Christ.

These holy women witnessed His beating, His nailing and His crucifixion (among the two thieves), they have heard the last words of our Saviour and wept bitterly when He gave His last breath saying "It is done!"

Even after the crucifixion of Jesus, when the Apostles were hidden for fear of the Jews, these women in that very early morning approached the Holy Sepulchre (Tomb) to anoint our Lord’s body as it was customary in the Hebrew tradition. And just when they reached the tomb seeking our Lord’s body, they found it opened and empty and an angel of the Lord announced them that „Christ had risen from the dead," showing them the empty shroud.

Mary of Magdalene, this brave women from whom Jesus exorcised seven demons, had become the greatest witnesses of Christ’ Resurrection; she remained weeping at the grave while other women had left. She was still seeking for our Lord’s body, but the tomb was empty. Then she met someone at the grave and thought to be the gardener. So she asked:

Sir, if you have carried Him away, tell me where you have laid Him, and I will take Him away

And "the gardener" Christ Himself, called her by name: Mary! His emphasis and tone of voice, made Mary recognize HIM. Although Jesus Christ was the same in flesh and blood, as He revealed Himself later to the Apostles, there was something changed in Him. It was undoubtedly His divine appearance, His transfigured flesh. And He was only recognized by those with a pure heart, that had their eyes enlightened.

Do not hold me, for I have not yet ascended to the Father; but go to my brethren and say to them, I am ascending to my Father and your Father, to my God and your God

When Mary recognized Him, she sought to approach Him. But Jesus said:

Not long after this event, our Saviour appeared to His disciples in Galilee on Mount Eleon. There, Jesus was to meet His Apostles gathered in one house.

So we see how these holy women were in company of the Risen Christ--Who appeared from time to time, in order to get them accustomed with his resurrected body, because it was a great miracle, since no one had seen a resurrected body before. (…)

During these forty days, He entrusted the Apostles and the Myrrhbearing women by appearing to them and to many others.

Christ’ Resurrection is a guarantee of our resurrection and, as Jesus Christ rose from the dead, as St. Paul says, we will also rise (…) and we’ll be standing before the judgment seat of Christ with all our good or evil deeds, and we’ll be spending eternity accounting the way we lived our lives in this world.

Brian Fretwell5/20/2013 5:49 pm
May the Lord grant to the servant of God the Elder Sofian memory eternal.
Thanks be to God for the spiritual wisdom and loving care of Elder Sofian expressed in his homily on the Myrrh Bearing Women.
×