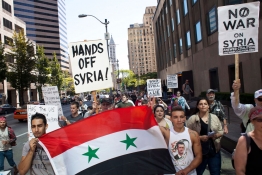 Photo: Reuters / David Ryder
President Barack Obama's announcement that he will seek congressional approval for military action in Syria for its alleged use of chemical weapons sparked protests across the United States on Saturday. Some Christian leaders who are aware of complexities of Syria's civil war have also opposed an intervention.

In Washington, D.C., protesters gathered outside the White House, shouting slogans against war, as the president addressed the nation from the Rose Garden on Saturday.

"The conflict's been going on for, what, almost 2 years now," The Associated Press quoted a protester, Tristan Brosnan, as saying. "Estimates are 100,000 Syrian civilians have been killed and all of a sudden the U.S. government has manufactured the excuse of the use of chemical weapons in Syria to use that excuse to intervene in Syria."

Obama said Saturday he has decided to punish Syria but will "seek authorization for the use of force from the American people's representatives in Congress." "While I believe I have the authority to carry out this military action without specific congressional authorization, I know that the country will be stronger if we take this course, and our actions will be even more effective," Obama said in a televised address. "We should have this debate, because the issues are too big for business as usual."

The legislation propose by Obama asks Congress to support a military intervention "to deter, disrupt, prevent and degrade the potential for future uses of chemical weapons or other weapons of mass destruction."

A debate on the issue is expected when Congress returns to Washington on Sept. 9.

In the Texan city of Houston, where numerous Syrian-Americans live, more than 100 protesters hit the streets Saturday, carrying signs stating, "We Don't Want Obama's War" and "Hands off Syria," according to the newswire. "How would you like another country to decide who is going to be the president of the United States?" Syrian-American property manager Hisam Saker was quoted as saying.

A rally, though with fewer people, was also held in support of an armed intervention in Houston, seeking Syrian President Bashar al-Assad's ouster.

Rallies against Obama's planned action were also held in Boston, Mass.; Los Angeles and San Diego, Calif.; and Chicago among other states.

Protests began on Friday after Obama said it is America's obligation to hold Syria to account for reportedly using chemical weapons in an attack in a Damascus suburb on Aug. 21, which killed 1,429 people, including at least 426 children.

The Syrian government has denied responsibility for the attack, blaming it on rebels. A civil war has been waging in Syria for the past two years between the supporters of Assad's regime and rebel forces seeking to overthrow his government.

In Allentown, Pa., which has the largest Syrian-American population in the United States, more than 100 people marched at St. George's Antiochian Orthodox Church on Friday. "The American public doesn't want this. They want peace, not war," NBC quoted the Rev. Moufid Khoury, head of the Arabic ministry at First Presbyterian Church of Allentown, as saying.

"We don't want another Iraq in Syria. The whole Iraqi war was built on a lie," Aziz Wehbey, president of the Syrian American Society in the Lehigh Valley, was quoted as saying. "Now we see the same scenario is repeated in Syria. We don't want any civilians to be killed in Syria."

Bishop Nicholas Ozone, who serves the Antiochian Orthodox Christian Archdiocese of North America, whose patriarchal headquarters is in Damascus, told RIA Novosti on Friday that the international community needs to "sit down together and, through peaceful conversation, agree on a resolution instead of this endless war."

Bishop Richard Pates, head of the U.S. bishops' Committee on International Justice and Peace, has also called on the United States to work for a ceasefire instead of an armed intervention. "The possibility of a diplomatic resolution seems much more appealing than the inevitable havoc and pain and suffering and deaths, especially to innocent civilians that will occur by any military undertaking of the United States," Pates, the bishop of Des Moines, Iowa, told National Catholic Reporter on Friday.

Syria's Christians, who make up an estimated 10 percent of the country's population of 23 million, are anxious about their safety after the Syrian government is overthrown.

About 10 percent of Syria's population is from the Alawite sect, a Shiite offshoot. About 70 percent of the people are Sunni Muslims.

President al-Assad is an Alawite and supported by Iran as well as Lebanon's Hezbollah among other Shi'a groups. On the other hand, the opposition movement includes Islamists, some of who are reportedly affiliated with al Qaeda or receive support from it.

In the absence of a clearly laid out agenda for political process in Syria, the outcome of the possible U.S. military intervention appears to be uncertain.

French President François Hollande announced Friday his country would offer strong backing for international military action against Syria, and the Arab League and Turkey have also offered their support to the U.S.

Britain's Prime Minister David Cameron pushed for a U.N. resolution to approve military action, but the British parliament voted against it.