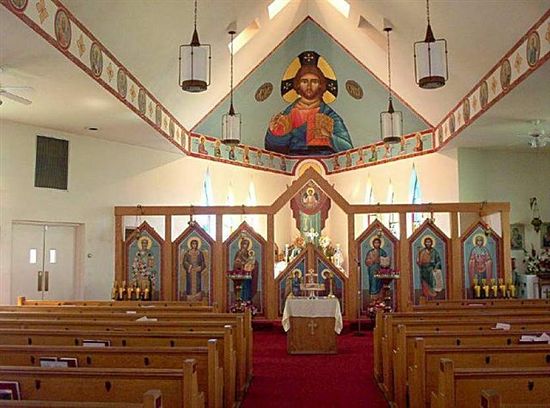 This is more than a normal weekend for the congregation of St. Michael Antiochian Orthodox Church of Monessen.

That's because the faithful of one of the oldest churches in the mid-Monongahela Valley are observing its 100th anniversary.

“It certainly is a significant time in the long and meaningful history of our church,” said George Essey of Monessen, a cousin of Bishop Basil. “And we are extremely grateful to Bishop Thomas and Bishop Basil for their presence in the observance.”

The celebration will mark another homecoming for Bishop Basil, who was born in Monessen on Nov. 26, 1948, the eldest of three children of the late William and Genevieve Lhota Essey. A graduate of Monessen High School and California University of Pennsylvania, he currently serves as leader of the Antiochian Orthodox Archdiocese of Wichita (Kan.) and Mid-America. He has been a member of the clergy since 1973.

Bishop Thomas, a native of Paterson, N.J., is bishop of the Diocese of Charleston (W. Va.) and the Mid-Atlantic. 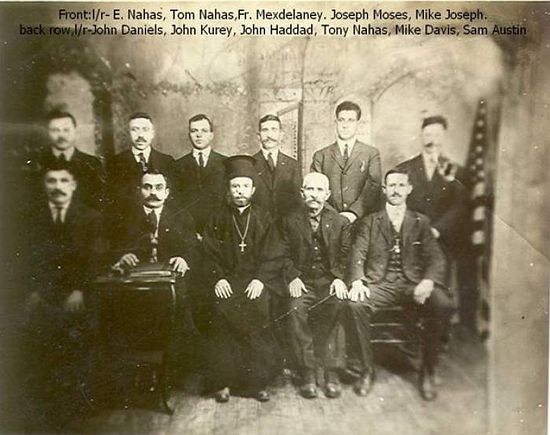 The founders of the church

A story in the Wednesday, June 17, 1914, edition of The Daily Independent of Monessen announced that W. W. Smallwood “has been awarded the contract to erect a new church for the Syrian Orthodox Greek congregation on Ninth Street near the corner of Knox Avenue. The church is to be a frame structure, the contract price being $4,550. The plans are to be made by architect A. E. Harris, and the building is to be done and ready for occupancy by or near the first of November.”

The newspaper said the building lot was donated to the church by Mike Joseph, who is one of Monessen's “best known and most reputable Syrian citizens, owning considerable property in town.”

Joseph was elected treasurer and president of the church building committee, and the newspaper reported that “during the progress of the erecting the church, he will give the work his personal attention.”

An article in The Word magazine, a national publication, in June 1914 said the new parish of St. Michael in Monessen, Pennsylvania, where Reverend Father George Michael Nakd is pastor, “has built a church building on property donated for this purpose by a member, Mr. Michael Joseph.” It continued:

“The new church building, which is 60 feet in length and 35 feet in width, is located on property formerly occupied by Mr. Joseph.

The members of St. Michael Church raised the sum of $539.00 for a down payment on the building.”

“His Grace, Bishop Raphael (Hawaweeny), Bishop of Brooklyn of the Syrian-Greek Orthodox Mission, gave his blessings for this venture, and the people of the new church selected to place the church under the heavenly protection of Saint Michael the Archangel, and named the church St. Michael Syrian-Greek Orthodox Church of Monessen, Pennsylvania,” Essey said.

This was later verified by Rev. George Alberts, the pastor of St. Michael at that time, and again on Friday, Oct. 30, 1998 by Bishop Basil. Supposedly, the groundwork was resolved and approved in 1913, with the building being completed in 1914.

At the same time, Bishop Basil also informed us that Archimandrite Raphael Hawaweeny, who later became Bishop Raphael, came to Monongahela in 1899 to help organize the Syrian church for this Mon Valley.”

A 1992 story in The Valley Independent, announced that the new site of worship for the St. Michael congregation “is the former St. Anthony of Padua Roman Catholic Church “on Patton Avenue), which was purchased by St. Michael's after 78 years at its former location of 533 Ninth St.

The parishioners, like the founders who preceded them, took on the task of refurbishing their new house of worship.”

“It took us six weeks, and we were able to celebrate our first service in the new church on March 15, 1992,” Essey said. “Our beloved son, Bishop Basil, returned for St. Michael Day in November 1992 to officially consecrate the church, and it was one of the most glorious week-end of activities ever held in St. Michael's history.”

Serving the parish as president of the Parish Council have been the following:

Samuel E. Essey served as treasurer for a period of 28 years.

In 1930, the Joyikat Hosn was organized to help the needy in the Joyikat (Homs) area of Syria.

“The stock market crash hit also in 1930, and the only reported effect it had on the church was the loss of $50,” Essey said. “The priest's pay that year was $85 per month. Archimandrite Bashir was appointed Bishop in 1936 by the Patriarch, and after a lengthy court battle, the name of Syrian-Greek Orthodox Church was changed to Syrian Orthodox Antiochian Church, and retained this name until the late 1970s, when we assumed the name of the Antiochian Orthodox Christian Church.”

Essey emphasized that “our small congregation has had parishioners serve in every war since World War I.”

“World War II hit our parish hard by taking many of our sons to the war to preserve our freedom, as did the police action in Korea, the conflict in Viet Nam, the Desert Storm conflict, the Iraq war, and currently, the Afghan situation,” he said.

“The Lord watched over our boys as they all returned from the wars, except one. Mortally wounded near the end of World War I in 1918 was 18-year-old Assad Mahfoud Assad, who was the son of Mahfoud Assad, a member of the Board of Trustees.”

Expansion of St. Michael's property took place in 1947 with the purchase of the parish house.

The Syrian Orthodox Youth Organization (SOYO) was formed in 1954-55 and was one of the most active and strongest SOYO groups in the Eastern Region of the United States. It was led by Norman Namie, who later became the Right Rev. John Namie, and Louise Davis, who became a professor at California State College and then at Dickinson College in Carlisle.

They were assisted by Sam David, who became the priest of St. George in Pittsburgh, and Ronnie Joseph, who retired from the U.S.Postal Service in Greensburg.

Essey said the original wooden structure was refurbished in 1957, and until the sale of the property in 1992, the church was among the last of the original church structures built in the second decades of the 20th century in use in the Antiochian Archdiocese.

The church choir was organized in 1960 with Tony Miralles as its director, followed by John Pankiewicz and then by George Essey in 1967.

The Altar Boys Guild was organized in 1961 under the leadership of Norman Namie, who was followed by Billy Essey.

Both of whom have followed through and served the Lord and the Archdiocese as the Rt. Rev. John Namie and Bishop Basil, “an honor to our church and community,” George Essey said. y. Also among the many young men to serve as altar boys was Mitchell Essey, who became a well-known veterinarian and, as a Boy Scout, earned the honors of becoming an Eagle Scout.

“A bit of history was left behind at the old church as every boy that served as an altar boy carved their name and/or initials on the backboard in the bread cutting room,” George Essey recalled.

In 1986, Archpriest George Alberts, a grand-nephew of the first priest to serve the parish of St. Michael, Rt. Rev. George Michael Nakd, was assigned as pastor of St Michael and as pastor of its sister church, St Ellien of Brownsville. He celebrated Divine Liturgy and Typica services on alternating Sundays at these churches. Father George was transferred to St. George AOC in Danbury, Conn., in July 2004.

On Aug. 1, 2004, the Rev. Fred Pfeil became the current pastor, being assigned to St Michael upon completion of his seminarian studies at St. Tikhon's Seminary.

“Our church history is a proud one in its 100 years of existence in Monessen and serving the Mon Valley for the Orthodox faithful and friends,” Essey said. “It has withstood good and bad times, the wars of the world, a stock market crash, and many more adversities, but will continue to prosper in the years to come with our friends and neighbors in this Mon Valley area.” Coronado: Russian Orthodox Mission in Costa Rica celebrates 20th Anniversary
The clergy and faithful of Costa Rica recently celebrated the 20th anniversary of the parish of Our Lady of Vladimir Church. 1000th anniversary of the Cliff Monastery celebrated in the Ukraine