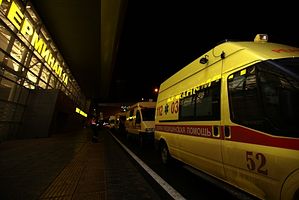 In Kazan, where an aircraft Boeing 737­500 had crashed, taxi drivers took relatives of the crash victims to and from the airport free of charge, report social networks users.

"Taxi drivers are unanimously refusing to take money from relatives of those killed," said in the message of a Twitter user named Krasnov Sergei (@krasnov_sergei1), reports RIA­Novosti. Spokespersons of Tatar Inform report just the same.

A passenger aircraft Boeing 737 of the Tatarstan airline flight from Moscow crashed on landing at the Kazan airport.

44 passengers and 6 crew members died as a result of the tragedy. Included among the victims of the plane accident were Irek Minnikhanov, son of the Tatarstan president, and Alexander Antonov, chief of the Federal Security Service department in Tatarstan.

In connection with the plane crash, the republic of Tatarstan declared Monday, November 18, a day of mourning. Families to sue over MH17 crash

Families to sue over MH17 crash
German relatives of three people killed in the downing of Malaysia Airlines Flight 17 plan to sue Ukraine for negligence, a lawyer for the families has said. July 16 declared a mourning day in Moscow for the metro accident victims
On Tuesday, July 15, between the “Park Pobedy” and “Slavyanskybulvar” stations of the Arbatsko-Pokrovskaya (or, “blue”) line of the Moscow underground railway three carriages of a train derailed. 22 people are dead, over 160 have been injured.