On icons of Great Martyr Barbara, the saint is often depicted with the Chalice in her hands. In the prayer, we ask the saint to grant us a “Christian end to our life—painless, blameless, peaceful, with Communion of the Holy Mysteries…” Truly, the saint often manifests miracles and comes with the Chalice to commune the dying. The story about how in the difficult soviet years, Saint Barbara came to conduct Abbess Ekaterina on her final journey has been passed down orally in the family of Archpriest Pavel Ilarionovich Milovanov (1923-1991), rector of the St. Nicholas Cathedral in the city of Alma-Ata, and father confessor of the Kazakhstan metropolia. 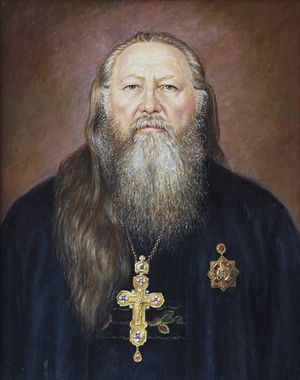 Archpriest Pavel Milovanov.
The future Abbess Ekaterina, in the world, Eudocia Yakovlevna Ivaniuk, was a relative of Fr. Pavel Milovanov through his wife. She was born in 1867 in the village of Dorotinka, Grodny province. When she turned twenty she entered the Lesna Convent of the Mother of God in the Kholm-Warsaw diocese. This was an unusual monastery. It was founded with the blessing of St. Ambrose of Optina, and was under the spiritual guidance of St. John of Kronstadt. St. Ambrose of Optina, an experienced guide in women’s monastic ascetic labors, compiled a cell rule for the Lesna sisters that is used in that monastery even today. The monastery was headed by Abbess Ekaterina (Ephimovskaya—now glorified as a saint by the Russian Orthodox Church Outside of Russia), an advocate of socially active monasticism. Her disciples founded and lead monasteries in the outlying areas of Russia, opened schools, visited hospitals, organized industries, and gave medical help to the local populations. After the Russian revolution, when the sisters moved to Serbia, they renewed women’s monasticism there. Now this monastery is located in France, striving to preserve all the traditions given it by its foundress. Abbess Ekaterina’s commandments were to “be a servant to all,” and “more action, less self-love,” among others.

Eudocia Yakovlevna was under Abbess Ekaterina’s guidance for around ten years. These years placed the foundation of her monastic formation as active and collected in external life, while at the same time loving inner, secret prayer. 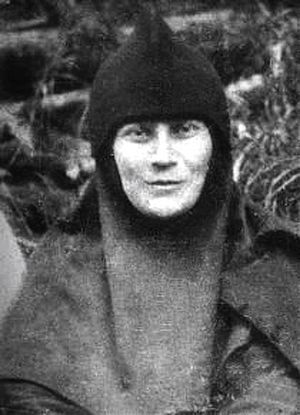 Abbess Ekaterina.
On January 22, 1896, Eudocia Yakovlevna was transferred to the Grodny Convent of the Holy Nativity of the Mother of God, which was assigned to the Krasnostok Convent by Synodal decree in 1901. On December 18, 1910, she was received to serve in Omsk diocese [Siberia] and appointed Superior of the Holy Kliuchinsky Convent. On April 7, 1912, she was made by decree of the Holy Synod Abbess of the Holy Kliuchinsky Convent of the Sign, which was dedicated to the Abalatskaya Icon of the Mother of God “Of the Sign”.

According to tradition, the Abalatskaya icon was found by a Kazakhi man who had gotten lost in a forest. He had gone out in winter for firewood but strayed from the path, and was beginning to freeze. In mortal danger, he started praying fervently to the merciful God to be saved. Suddenly, in a forest grove he saw a shining flame, and when he approached it he discovered an icon standing near the cottonwood tree, with a lit candle beside it. From under the cottonwood tree a spring flowed. The traveller immediately found the road home, and when he arrived at the town, he told the Orthodox priest about what had happened. The priest set out quickly with some Siberian Cossacks and the Kazakh as a guide to the place where the icon was found. The icon was still standing near the tree. After praying, the priest tried to take the icon from the tree, but neither he nor any of the Cossacks were able to do it. Then he turned to the Kazakh, who after washing his hands in the spring took up the icon. They brought the image of the Heavenly Queen to the church, and the place where it was found and the spring became a sacred site for the faithful. By God’s Providence, it was granted to an as yet unbaptized Kazakh to discover the miraculous icon. Later he became a deeply religious and pious Christian.

In time, a convent for nuns was founded on that place—the Abalaksky Convent, which conducted important peace-making and missionary work among the local Muslim population, the Kazakhi and Altai peoples. Abbess Ekaterina was aided in this by the experience she received in the Lesna Convent.

The Kirgiz spiritual mission as an affiliate of the Altai mission, which formed in 1830, was opened in 1882. The Kirgiz mission received its independence by order of the Holy Synod of the Russian Orthodox Church on January 31, 1895. 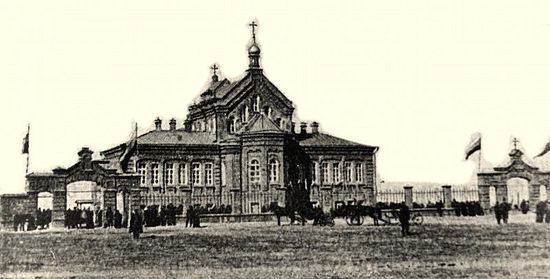 After the bloody revolutionary events, the new regime began to persecute the Orthodox Church, closing churches, mocking the sacred shrines venerated by the people, and destroying priests and monastics.

Oral tradition has preserved testimony to our times about how one night, not long before the convent was closed, one nun saw the monastery church gleaming with light from within. She thought that there was a fire; she woke up all the sisters, and with Abbess Ekaterina at the head they all ran worriedly into the church. There was no fire, but from the copy of the Semipalatinsk icon of the Abalatsky Mother of God a ray of light was shining, illumining the entire church. Stunned, the sisters froze at the threshold, not knowing what to make of this phenomenon. Only the greatly experienced mother abbess pronounced: 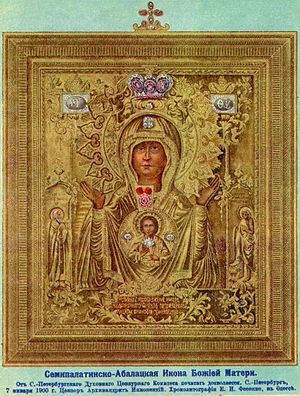 The Semipalatinsk Abalatsky Icon of the Mother of God "Of the Sign".
“Prepare yourselves sisters, they will close us down soon.”

In March of 1921 the monastery was officially closed, and the monastery icon of the Mother of God “Of the Sign” was given along with all other belongings to the Orthodox community in the village of Staro-Semipalatinsk. The outcast nuns settled in small groups in the city of Semipalatinsk, either renting living space, or pooling their funds to buy houses. The nuns continued to observe their monastic rule; many of them went to work in the hospital as nurses. Abbess Ekaterina was separated from the monastery by the authorities immediately after it was closed, and sent to live in a settlement.

In August of 1937, mother abbess was arrested along with Archbishop Alexander (Shchukin) of Semipalatinsk[1] and sentenced to imprisonment. Some of the nuns were sent into exile. From 1937-38, as Fr. Pavel Milovanov’s relative Anna Vasilievna Samoilenko related, the rest were taken outside the city at night and buried alive! Holy nun-martyrs, pray to God for us!

Mother abbess was sent to a settlement in Uzbekistan, where with the help of trusted friends she was able to correspond with her relatives in Alma-Ata. During the final months of her martyric labor she was able to inform her relatives of the great mercy shown to her through Great Martyr Barbara. Before her death, the abbess desired to receive Communion and Divine Unction, but in those days it was very hard to find a serving priest—especially for her, since she was in exile under observation by the “plenipotentiary organs”! 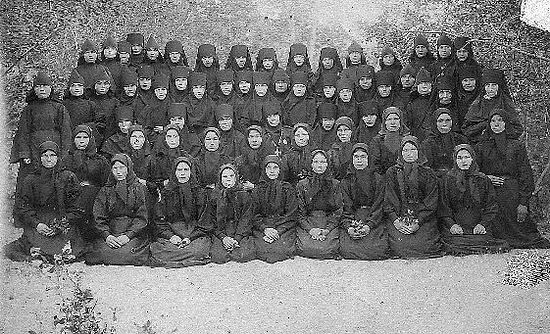 The sisters of the Convent.

Abbess Ekaterina started fervently praying to St. Barbara that she not allow her to die without confession and Communion. During this strong, repentant prayer, the Great Matyr Barbara herself appeared with the Chalice and gave the dying abbess Communion. 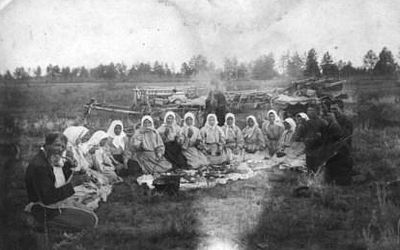 Sisters on obedience in the fields.

The family always remembered this wondrous event. During complicated situations, everyone, including the little children, especially prayed to Great Martyr Barbara and always received help and consolation. By God’s Providence Fr. Pavel served in the St. Nicholas Cathedral in Alma-Ata for forty-five years—from 1946 to 1991. One of the Cathedral’s side-altars was dedicated to Great Martyr Barbara. Every week, a moleben and Akathist was read before the icon of St. Barbara. Fr. Pavel knew the Akathist by heart and always prayed with special fervency to the saint: “O much-suffering and all-glorious saint, Great Martyr Barbara! Receive now our prayer, save us from all sickness both spiritual and bodily, deliver us from all enemies visible and invisible, and preserve us from eternal torments by thy God-pleasing intercession, that we may sing to God with thee in the land of the living: Alleluia.”

From a book being prepared for publication by N. B. Solnsteva entitled, Under the sign of Thy Cross, dedicated to the life of the confessor, Fr. Pavel Milovanov.

[1] (1891-1937), in the world, Alexander Ivanovich Shchukin, was born in Riga to the large family of a priest. He grew to be a quiet, modest boy obedient to his parents, dreaming of becoming a priest and striving to emulate the ancient ascetics. He loved to shut himself in his father’s room and pray. In 1915, he graduated from the Moscow Theological Academy as a doctoral candidate of theology and was appointed teacher of the Nizhny Novgorod theological seminary. In 1917 he received the monastic tonsure in the Holy Trinity-St. Sergius Lavra and was soon afterwards ordained a hieromonk. From 1918 to 1923 he served in a church in the village of Lyskovo, Nizhny Novgorod diocese, together with his father. In 1923 he was consecrated bishop of Lyskovo, vicar of Nizhny Novgorod diocese. Vladyka lived in the St. Macarius of Zheltovodsk Monastery, where he organized the teaching of the Law of God to children. He often gave sermons rebuking those who destroyed churches. In autumn of 1928 he was arrested and imprisoned in the Nizhny Novgorod prison. He was given the offer of stopping his sermons in exchange for freedom, but he refused. He was beaten and threatened, but he always answered, “My body is in your power, and you can do with it whatever you please, but I will not give you my soul.” Vladyka was accused of “inculcating the people with his counter-revolutionary convictions by giving sermons with anti-soviet tendencies,” and sentenced to three years of prison camp, which he served in Solovki, where he worked first as a guard and then as a bookkeeper. After his release in 1931, Vladyka was appointed first to the Volkhov vicariate in Orlov diocese, and from summer of 1932, bishop of Orlov. In September, 1936, he was appointed to the cathedra of Semipalatinsk. After a year he was arrested. Vladyka did not sign a single accusation, and courageously withstood the interrogations. In October of 1937, he was accused of “espionage and counter-revolutionary agitation”, and shot. He was included among the ranks of new martyrs and confessor of Russia at the Anniversary Synod of Bishops of the Russian Orthodox Church in August 2000, for Church-wide veneration.
See also Nigerian man survives 3 days at bottom of Atlantic
Dramatic footage shows the unlikely rescue of a ship's cook, who survived for almost three days trapped in an air bubble in his sunken ship. Great Martyr Barbara, Protectress from Sudden Death
Commemorated December 4/17
By day, she was able to gaze upon the wooded hills, the swiftly flowing rivers, and the meadows covered with a mottled blanket of flowers; by night the harmonious and majestic vault of the heavens twinkled and provided a spectacle of inexpressible beauty. Soon the virgin began to ask herself questions about the First Cause and Creator of so harmonious and splendid a world.
Comments

Vaska Petrovich12/19/2013 2:05 am
Thank you very much for all the articles you present on this website. I enjoy reading them every day.
I cannot express how wonderful and beneficial I find them.