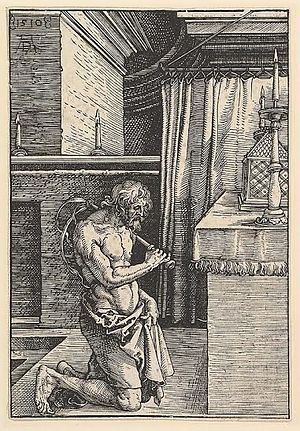 At the Metropolitan Museum of Art in the New York City, at "A picture of the day" exhibition, "The Penitent" woodcut by the German engraver and painter Albrecht Dürer (1471-1528) is being displayed, reports the museum's website.

The display of Dürer’s was timed to coincide with the beginning of the Lent for Western Christians, which commenced on Ash Wednesday (March 5 this year). ‘Jerusalem,’ a tribute to the holy city, comes to the IMAX screen
The newly released movie "Jerusalem," filmed in 2D and 3D and playing on IMAX and other giant-screen theaters across the U.S. and the world, including Salt Lake City, gives viewers grand, hallmark panoramas, at once awe-inspiring and intimate. Byzantine Art Travels to the US

Byzantine Art Travels to the US
Two film productions, one from the National Gallery of Art in Washington and one from the Greek Ministry of Culture, will be made at archaeological sites and monuments in Greece in the coming months.
Comments
×