As England celebrates the day of its patron saint, many Palestinians are gearing up for their own forthcoming celebrations of the figure they also regard as a hero. 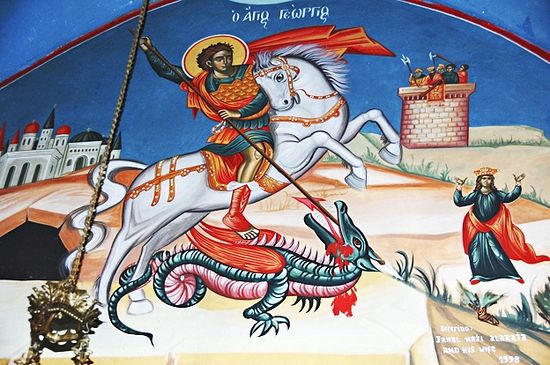 A familiar flag flaps in the wind above a Palestinian church in the West Bank village of al-Khadr.

The red cross on a white background has been associated with Saint George since the time of the Crusades.

It is the national flag of England and is also used as an emblem by other countries and cities that have adopted him as their own patron saint.

However, Palestinians have particular reason to display the symbol and revere the early Christian martyr. For them he is a local hero who opposed the persecution of his fellow Christians in the Holy Land.

"We believe he was a great martyr for his faith who defended the Christian faith and values," says Greek Orthodox Archbishop Atallah Hanna. 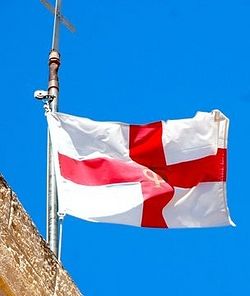 The St George's flag flies above a Palestinian church
"By making sacrifices for his faith he was able to defeat evil. We take St George as a patron for people living here - and as he was born in historic Palestine, we pray to him to remember us and this holy land."

St George was a Roman soldier during the Third Century AD, when the Emperor Diocletian was in power. It is said that he once lived in al-Khadr near Bethlehem, on land owned by his mother's family.

While the saint's father is usually traced back to Cappadocia, an area in modern Turkey, it is believed his mother was Palestinian from Lydda - now Lod, in Israel.

The saint is remembered for giving away his possessions and remaining true to his religion when he was imprisoned and tortured before he was finally executed.

There are many churches in the West Bank and Israel that bear the name of St George - at al-Khadr, Lod and in the Galilee, for example.

While the Western world marks St George's Day on 23 April, in the Palestinian areas it falls on 6 May, according to the older calendar used by the Eastern Churches.

A service is held for the saint at al-Khadr, bringing worshippers from the Bethlehem area and much further afield to light candles and say prayers. During the feast, special bread is baked that shows him in his typical pose as a dragon slayer. 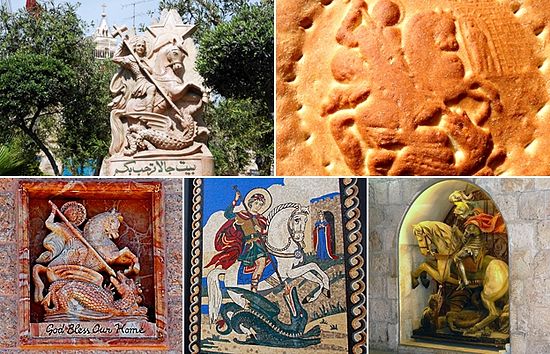 ​The image of St George appears in the form of statues, mosaics and even bread (top right)

Such images are also a permanent feature on many Palestinian Christian homes and public buildings. It is thought that the saint brings them protection.

"He's a native saint who has done many miracles. We respect him a lot," explains sculptor Akram Anastas.

"He's presented as a knight full of peace and grace, riding his horse and always fighting evil, which is symbolised by the dragon. We write underneath in Arabic 'God bless our house.'"

Anastas has worked on thousands of stone carvings of the saint during his career, selling them to Palestinian and international buyers.

"I like him very much. He's a good friend of mine and I've found him many times in my life. He's my guardian angel," he says. 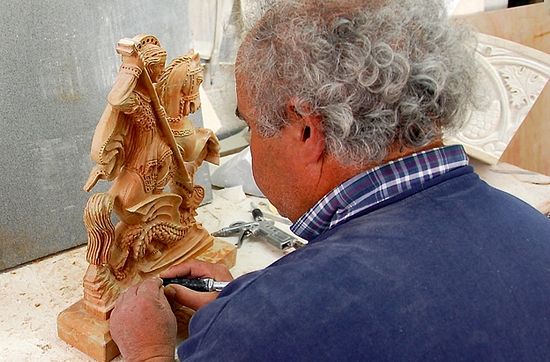 With its associations of courage, gallantry and honour, the Christian name, George, remains one of the most common in the Palestinian Territories.

Other variants are Khadr (Arabic for "green one") and Jeries.

In a Bethlehem coffee shop known locally as "Abu George" [the father of George], I sit with members of the Thalgieh family, who are all called George.

"Maybe we have 10 people [named George] until now. Perhaps in the future we will reach 100," says George Elias Saba Thalgieh.

"Here in Bethlehem, it's not just our family. We all believe that St George will help us when we need him. If you have an accident the first thing you say is 'Ya Khadr' - it means we are calling for St George to help us.

"I love the name. Our grandfather is George, I am George so now my sons will name their sons George," adds the older man's nephew, George Nabil George Thalgieh, a well-known singer. 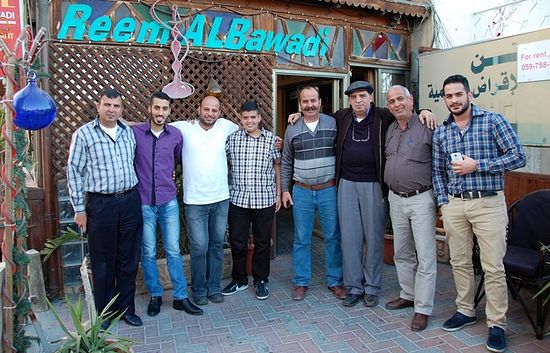 "Oh, St George we pray at al-Khadr," go the lyrics. "We are the Christians with the candles in our hands."

There are a number of customs associated with the saint.

Sometimes the Greek Orthodox priest is asked to insert a key into the mouth of children with speech difficulties, turning it to "unlock" their tongues.

There is a ritual in which visitors put a chain around their neck, pass it over their body and kiss it three times. This is thought to ward off sickness.

Letters asking St George to solve family disputes are placed inside the glass that covers his icon.

People appealing to the saint for help also give sheep to the church so it can distribute meat to the poor.

Some Palestinian Muslims, especially those from al-Khadr, also follow the practices.

"It's not only the Christians that appreciate him, the Muslims also feel the power and the miracles of St George," says Father Ananias.

"When the church was built [in the Byzantine period] the neighbours were Christians. I don't know when the local people became Muslims, but under the Turkish [Ottomans] they protected the monastery and remained very close."

An old woman wearing a traditional embroidered dress and the Islamic veil tells me: "We all believe in al-Khadr, even my husband. I made a vow to light a candle in al-Khadr church."

Many Muslim scholars suggest that a servant of God mentioned in the Koran as an associate of Moses, refers to the figure of al-Khadr, who is identified with St George.

In the 1,700 years or so since his death, the saint has also become identified with other figures, some historical and some mythical.

The legend of him saving a maiden by killing a dragon probably originated in the Middle Ages.

Although many details of his life remain unclear, Palestinians see him as having set a powerful example for helping the needy and bravely standing up for one's beliefs.

It is this reputation that has also made him popular around the world. The Holy and Great Martyr George
Once, when he heard in a court the inhuman sentence concerning the annihilation of Christians, St. George became inflamed with compassion for them. Foreseeing that sufferings were also awaiting him, George distributed his property to the poor, freed his slaves, appeared before Diocletian and, having revealed himself as a Christian, denounced him for cruelty and injustice. George's speech was full of powerful and convincing objections against the imperial order to persecute Christians. The Real St. George
Archpriest Andrew Phillips
Regularly, the secular media report stories about England's current patron-saint. There are those who complain that St George is 'a Turkish saint'; others project the image of a knight in medieval armour; yet others claim him as 'the patron of the English football team'. Where does such nonsense come from and who is the real St George? With apologies to St George - patron saint of a country that seems to be dying of shame
Happy saint’s day - hope you have a good one! True, you won’t get a proper celebration like your pals Andrew, David and Patrick. Greek Orthodox Cathedral of Saint George: The Oldest Church in the City of Beirut St. George Monastery in the Judean Desert, Accessible Once Again

St. George Monastery in the Judean Desert, Accessible Once Again
The stark beauty of the place is noticeable from the moment you get out of the car or bus. The Wadi Qelt area of the Judean desert forms an oasis of sheer beauty and certainly seems to have been a fitting place for Joachim and Anne to have stood and prayed to God for the Virgin Mary.
Comments
×