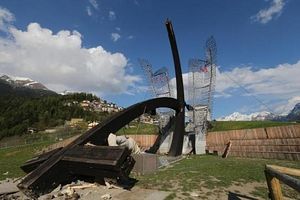 Italian prosecutors have made accusations against 13 people, who participated in the design and construction of a giant crucifix that collapsed in April and killed a disabled young man, reports the ANSA agency.

The crucifix, engineered in quite an odd and curved shape, reached about 100 feet in height. The sculpture in Cevo (Northern Italy) had been erected in memory of a visit to the Diocese of Brescia by Pope John Paul II.

The incident happened just several days before canonization of the Popes John Paul II and John XXIII on Sunday, April 27.

One notable fact is that youth killed by the falling crucifix lived on a street named after John XXIII. Peru court upholds presence of crucifix in public places
The Constitutional Court of Peru ruled that the Bible and the crucifix do not violate the secular nature of the the country.
Comments
×