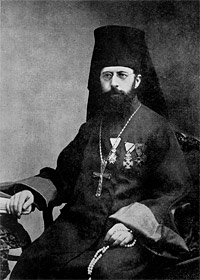 Born to Serbian immigrants in San Francisco in 1863, Archimandrite Sebastian Dabovich has the distinction of being the first person born in the United States of America to be ordained as an Orthodox priest,[1] and also the first native-born American to be tonsured as an Orthodox monk.

His greatest distinction, however, lies in the tremendous apostolic, pastoral, and literary work that he accomplished during the forty-eight years of his priestly ministry. Known as the “Father of Serbian Orthodoxy in America,”[2] he was responsible for the founding of several of the first Serbian churches in the New World. This, however, was only one part of his life’s work, for he tirelessly and zealously sought to spread the Orthodox Faith to all peoples, wherever he was called. He organized parish communities of Orthodox Christians of varied ethnic backgrounds; took part in the work of St. Alexis Toth of Wilkes-Barre to bring former Uniates more fully into the Orthodox ethos and way of life; and labored to bring Episcopalians into the saving enclosure of the Orthodox Church. He was an Orthodox apostle of universal significance.

Describing the vast scope of Fr. Sebastian’s missionary activity, Bishop Irinej (Dobrijevich) of the Serbian Orthodox Diocese of Australia and New Zealand has written: “Without any outside funding or organizational support, he carried the gospel of peace from country to country…. Concentrating much of his work in the United States, he ceaselessly traveled back and forth across the American continent, using every available mode of transportation — from stagecoach to railroad to foot. His wider ministry stretched from the Aleutian Peninsula of Alaska, to Russia and Japan, to small Balkan towns on the coasts of the Black and Adriatic Seas.

“By every report Sebastian Dabovich was not one to ask about jurisdictional or national affiliation before setting out on long journeys to minister to Orthodox Christians in mining communities, lumber camps, or far-distant towns or villages. He offered his pastoral services with a free hand to anyone who was in need. Just as he gave no thought to his own comforts as a youth, caring more for the needs of others than for his own concerns, Fr. Sebastian denied himself all worldly comforts of home, family, or earthly possessions, so that he could provide for the spiritual needs of the Russian, Serbian, Bulgarian, Greek, Syrian, or Arab Orthodox Christians who required his aid.”[3]

It is said that Fr. Sebastian baptized more people than any other Serbian priest of theWestern Hemisphere.[4]

St. Nikolai (Velimirovich) of Zhicha, Serbia, who buried Fr. Sebastian at the Zhicha Monastery when the latter reposed there in 1940, called him “a viceless man” and fittingly designated him “the greatest Serbian missionary of modern times.”[5]

Ten years after Fr. Sebastian’s repose, St. Nikolai wrote of him: “Here is a man who indebted all the Serbian race, especially all the Serbs and all the Serbian organizations in America. Should that man remain without a monument or any sign of honor on American soil? He does not need it. He did not wish it. All he wished to his last breath was the Kingdom of Heaven, which I believe he has obtained by the grace of his Lord. But his people need it; his posterity needs it. The Serbian people always cultivated the noble virtue of gratitude. Let them express their traditional gratitude to this remarkable Serbian — Father Sebastian Dabovich.”[6]

Today, nearly seven decades after his repose, Fr. Sebastian is being shown fitting honor and gratitude by the Serbian Orthodox Church both in the homeland and in the diaspora.With the blessing of Bishop Hrizostom of Zhicha and of Bishop Maxim of Western America, Fr. Sebastian’s remains have been unearthed from his grave in Zhicha Monastery in Serbia and are to be transferred to the St. Sava Church in Jackson, California: the first church founded by Fr. Sebastian, and the first Serbian Orthodox Church in the Western Hemisphere. On September 1 (n.s.), 2007, the Divine Liturgy will be celebrated in Jackson to mark this occasion, with numerous hierarchs and clergymen participating. The Liturgy will be followed by a memorial service for Fr. Sebastian, the interment of his remains in the St. Sava Church, and a talk on Fr. Sebastian’s life by the above-mentioned Bishop Irinej. In the eyes of many, these events are a step toward the Orthodox Church’s recognition of Fr. Sebastian as a saint. “Even now,” Bishop Irinej has written, “[Fr. Sebastian] is considered worthy of canonization among the Serbian people. May that day indeed come quickly! The epitaph on his tombstone at Zhicha Monastery reads most appropriately, ‘The First American Serbian Orthodox Apostle.’ Holy Apostle Sebastian, pray for us!”[7] To commemorate the transfer of Fr. Sebastian’s remains to America, we are dedicating our 2008 Calendar to his memory. This Calendar presents photographs and descriptions of important people in Fr. Sebastian’s life and of churches which he either founded or served during the half-century of his pastoral ministry. A Life of Fr. Sebastian — the first full biography to appear in any language — is being published concurrently in our magazine, The Orthodox Word.

As part of his missionary labors, Fr. Sebastian compiled one of the first English translations of the Divine Liturgy, and wrote and published, from his own meager means, some of the first English-language books of Orthodox catechism. Besides bearing witness to his missionary and pastoral zeal, Fr. Sebastian’s books also testify to his ardent love for Jesus Christ and His Church, to the depth of his knowledge of the Orthodox Faith, to his careful adherence to the teachings of the Church, to his literary and poetic gifts, and to his profound sense of spiritual beauty. A large portion of the books consists of sermons that he gave in the Russian Orthodox cathedral in San Francisco and in mission parishes on various feast days. These sermons reveal him as an inspired preacher whose words could soar to the heights and at the same time strike deeply the hearts of his listeners. Belowwe present one such sermon, which he published in his book Preaching in the Russian Church (San Francisco, 1899).

[1] Alaskan-born priests were ordained before Fr. Sebastian, but this was when Alaska was still part of Russia. Interview with Fr. Damascene (Christensen), from the Monastery of St. Herman of Alaska in Platina, California
Hieromonk Damascene (Christensen), Nun Kornilia (Rees)
On Wednesday, the fourth day of the annual Nativity readings began the conference section dedicated to the «Orthodox understanding of creation of the world». One of the speakers was an Orthodox hieromonk, Fr. Damascene (Christensen), an American from the Monastery of St. Herman of Alaska in Platina, California, which belongs to the Serbian Orthodox Diocese of Western America. This monastery is well known in Russia as the home of Fr. Seraphim Rose, its founder, and Fr. Damascene is a member of the Brotherhood from the time of Fr. Seraphim’s repose. He is the author Fr. Seraphim’s biography (due to appear in a new Russian version this year under the title Father Seraphim Rose: His Life and Works), and is something of an expert on Fr. Seraphim’s Life and writings in general.
×