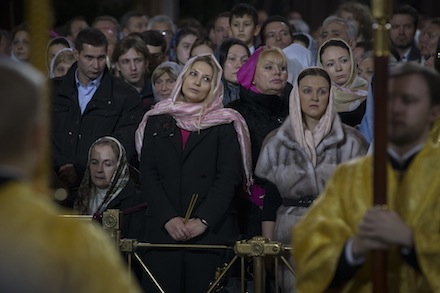 The end of Communism was extremely stressful, but Russians are finding their faith again (AP)

I have been reading a book about Russia: Dying Unneeded by Michelle Parsons. It is about the wartime and post-war generation of former Soviet citizens whose lives came to a halt when the USSR collapsed in 1991. The meaning and purpose of their lives had come from the state, from work, from surviving with stoical humour and resignation the problems that arose in daily life from the command economy. The author examines the dramatic mortality rate during the years 1990-1994, when state socialism suddenly ended, to be followed by, as Parsons puts it, “upheaval, disorder, decay, wildness and thievery”.

Overnight, a whole generation of Russians lost their jobs, their pensions and their security. Too old to retrain for new careers they started to experience the poverty and scarcity that they had known during the war and which they had thought was over for good. Men particularly, who had defined themselves through their work, started to drink heaving (not helped by often being paid in vodka rather than in money) and to suffer stress-related heart attacks. Suicides also increased. Women survived better because they simply continued to struggle, as they always, had, with providing for their family’s needs.

Parsons paints a grim picture of a society that had been led along by their secular faith in the Communist ideology, which then failed them spectacularly. Without inner spiritual resources and living for years under the official atheism of the Soviet system, their lives became meaningless. Although she briefly mentions the notion of the “Russian soul” she defines it in a patriotic and community sense – a people held together by suffering and sacrifice, especially in the wartime years when Russia lost 27 million people.

Yet, as Robert Moynihan describes in his article of 20 October, entitled “Light from the East”, there has been a spiritual resurrection in Russia as if, after a long nightmare, people have awoken to different, transcendent sense of reality. As he put it, “An East which, until 25 years ago, was officially atheist and unrelentingly radical in its vision of a ‘new Soviet man’ whose identity was rooted in his economic class”, is now experiencing a reconversion. According to Metropolitan Hilarion of the Russian Orthodox Church, who is quoted by Moynihan, this turning back towards Christianity began in 1988, during the celebrations for the 1000-year anniversary of the coming of Christianity to Russia.

“From that moment there began…the revival of the Church throughout the former Soviet Union.” By the start of the 1990s hundreds of people were regularly seeking baptism in towns and villages all over the country. In the last 26 years Metropolitan Hilarion says, 26,000 churches have either been restored or opened, as well as 800 monasteries, filled with young monks and nuns. He comments that “all this has taken place in the very same era which in the West some call post-Christian.”

What a strange irony there is in all this; the West, formerly seen as a bastion of civilized values, based on their deeply Christian origins, has slipped almost as fast into a moral wilderness at the same time as the vast country once dominated by Communism has rediscovered its Christian roots and the inner transformation that comes with conversion. Russia might have enormous problems, as Michelle Parsons’ book indicates, but denial of the existence of God is no longer one of them. Sites for rites – new religious ceremonies law signed
The Russian President has signed into law the bill defining places where religious ceremonies, including mass prayers and marches can be held without prior notification or agreement from local authorities.