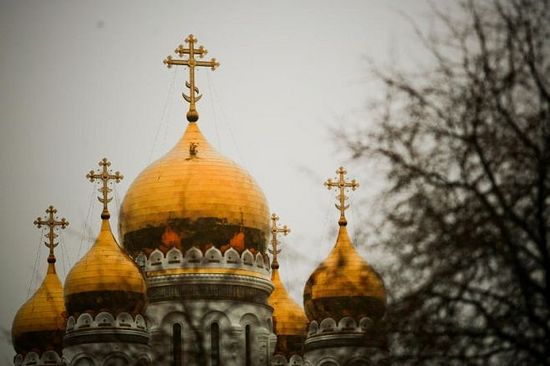 As the Russian economy reels from low oil prices and Western sanctions, the country is seeing rising interest in unorthodox financial solutions, most recently one pitched by the Orthodox Church.

Last week, the Russian Chamber of Commerce and Industry threw its support behind a so-called Orthodox Financial System developed under the aegis of the Moscow Patriarchate and strongly resembling the better known Islamic financial system.

"The Chamber of Commerce and Industry supports the creation of the Orthodox Financial System … and is ready to provide its platform for detailed and professional discussion of these questions together with the relevant committees of the chamber," the chamber's press service reported last Friday after a meeting between its chairman Sergei Katyrin and Vsevolod Chaplin, a senior Orthodox cleric overseeing the project.

"Now, during a time of crisis when access to financial resources is limited because of sanctions, we are finally being heard. And society has reacted positively to our proposal," said Dmitry Surmilo, the coordinator of the working group creating the Orthodox Financial System at the Moscow Patriarchate's department of external church relations.

Based on Russian law, Orthodox morals and Russian business traditions, the Orthodox Financial System is designed to be resilient to world crises and help reduce Russia's reliance on the Western banking system, the project's authors said.

The Russian economy is expected to contract by about 4 percent in 2015 due to dropping oil prices and restricted access to Western finance as part of the sanctions package imposed last year against Russia over its role in the Ukraine conflict.

The idea of developing its own financial alternative to the existing banking system was floated by the Russian Orthodox Church around 20 years ago but only recently garnered attention from banking officials and the public.

The Orthodox Financial System was publicly unveiled by Chaplin in December last year.

At that time, Chaplin — known as one of the most conservative and outspoken Orthodox clerics — prophesied the end of the current "money makes money" economy. Therefore, a financial system based not on usury — charging interest for lending money — but on traditional social values should be introduced, he said.

The new system is not designed to replace traditional banking but to complement it, according to its authors.

The new financial system aims to incorporate respect for the law, charity, moderate consumption and quality goods and services that are safe for consumers' health, soul and the environment.

Other religions are welcome to participate within the Orthodox Financial System, on the condition that they follow these regulations.

Just like Islamic banking, the Orthodox Financial System does not allow service charges on loans. Participants of the system share risks, profits and losses. Speculative behavior is prohibited, as well as investments in gambling, drugs and other businesses that do not meet Orthodox Christian values.

Orthodox banking is made up of a low-risk credit organization that controls all transactions, and investment funds or companies that source investors and mediate project financing.

The authors claim that a low-risk credit organization will prove invulnerable given its avoidance of operations with active financial risks.

Priority is placed on ensuring financing of the real sector of the economy, according to Surmilo.

However, with inflation in Russia expected to reach 10.8 percent by the end of the year according to the Central Bank, it was not immediately clear how such a system of personal loans would work.

"The system can only function if the loans we are planning to offer at least correspond to the level of inflation in order to preserve the value of given funds over time," Surmilo said.

In May, alternative banking systems were discussed in the State Duma for the first time.

These projects are currently haphazard, with some urging commercial banks to transition into investment ones, some calling for complete abolition of interest rates and some for lowering interest rates, said Alexei Vyalkin, director of the department of investment promotion and innovation at the Chamber of Commerce and Industry.

Pie in the Sky?

Experts disagree on the viability of Orthodox banking.

According to Sergei Grigoryan, head of analysis at the Association of Russian Banks, the concept lacks any practical use.

Islam's prohibition of charging interest on lending necessitates an Islamic banking system, he said. Because the Orthodox Church does not restrict interest-bearing loans, the promotion of this idea looks like a marketing ploy, he added.

According to Anatoly Aksakov, president of the Association of Regional Banks of Russia, a system of conducting business that does not contradict Orthodox Christian morality makes sense.

"If there are Catholic and Islamic banks and they are quite popular, why don't we set up Orthodox ones?" he said.

Moreover, Russia now needs to seek financial instruments to break the blockade of the West, and Orthodox banking could be one of them, Aksakov said. Such an institution under the auspices of the Church would likely be safe from sanctions, he added.

Islamic banking prohibits the collection and payment of interest, and places emphasis on equality and fairness in accordance with Sharia law. Investments in gambling operations or the alcohol business are prohibited.

The introduction of Islamic banking to Russia was cheered by the head of Russia's state-owned bank Sberbank, German Gref, who called it a very important instrument amid the current problems with raising funds on international markets, Interfax reported in May.

Last month, Sberbank and the republic of Tatarstan signed an agreement on cooperation in the field of Islamic financing, Sberbank said in a press release.

Despite approximately 20 million Muslims living in the country, there are no operational Islamic banks in Russia at the moment due to a lack of Russian regulatory framework for Islamic finance.

Nevertheless, Russian officials are discussing the possibility of opening Russian branches of Tatarstan traditional banks, which would operate under Islamic rules.

In April, Chaplin congratulated Tatarstan's government on their incorporation of Islamic banking and expressed hope for the creation of a similar Orthodox Financial System.

The Orthodox Church believes the process of giving loans should be based on an individual approach, said Surmilo of the Moscow Patriarchate.

"Now banks give loans to everybody and expect all of them to be returned in time without taking into account people's financial situation or their personal circumstances," Surmilo said. "The Orthodox Financial System sees social wealth as more important than personal wealth."

"A bank providing low-interest loans can compensate for lost profit, for example, by operations on the foreign exchange market or through investment," Surmilo said.

Vyalkin of the Chamber of Commerce and Industry said it was too early to predict how Orthodox banking would fare in Russia, as "so far the project has more questions than answers." A detailed working plan is needed before conclusions can be drawn, and implementation could take years, he said. Patriarch Kirill: “overcoming difficulties, we are growing together with churches”

Patriarch Kirill: “overcoming difficulties, we are growing together with churches”
“Now we are making great efforts in order to build hundreds of churches in the capital city of Moscow alone,” reminded His Holiness Patriarch Kirill after the Divine Liturgy at the Dormition Cathedral of the Moscow Kremlin on the feast of The Presentation (Entry) of the Mother of God into the Temple.
Comments

My husband and I are largely self sufficient and support both Russian and English speaking people.

We want to live on an acareage and would use bed and breakfast funds to pay a mortgage, not to ask unrealistic, cost prohibitive sums.

We follow sustainability, not predatory principles. We would bring honesty and full detailed accounting, not unprincipled PR that says one thing and does another.

I want to provide Orthodox Christians with an affordable, family and Christian traditional accommodtions with the convenience of on-hand drivers (my husband and I).

We would have our own organic food such as our own chickens where we would not use hormones nor anti biotics. Only natural, God given food.