On August 9/22 the Church commemorates the Synaxis of the Saints of Solovki Monastery. We present below the lives of the founders of the island monastery, Sts. Herman, Zosima, and Sabbatius: 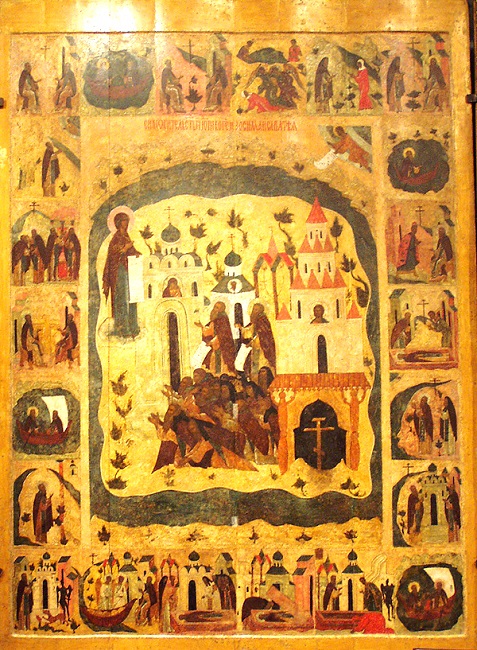 Synaxis of the Saints of Solovki Monastery

Russia in the 15th century saw the flowering of a "Northern Thebaid." The vast forests of remote regions inimical to civilization provided a welcome refuge for those zealous to share with the angels a life of concentrated communion with God. It was for just this reason that an ascetic by the name of Herman had chosen to dwell in the sparsely populated area along the shore of the White Sea. Like other hermits, he had settled not far from a chapel to take advantage of occasions when clergy would come to offer the Holy Mysteries--Confession, Communion and Baptism--to the local inhabitants, among whom there were still a number of pagans.

There, at the mouth of the river Vyg, Herman was joined by another monk, Sabbatius, who had come in search of solitude. He had already spent many years in the monastic life, first in St. Cyril of White Lake's monastery and then on Valaam. But everywhere his sanctity drew the praises of men. Sabbatius had heard of the uninhabited island of Solovki, which lay two days' journey into the White Sea, and had come seeking passage to the island. St. Herman was also attracted by the island' s suitability for the monastic life: it was quite beautiful, with an abundance of berries, fish and timber; and for the better part of the year it was inaccessible from the mainland. He proposed to Sabbatius that they should settle there together, and in 1429 the two monks set off in a boat to make a new life.

They chose to establish themselves on an elevated site above the shore, and there they began to cultivate the soil, while immersing themselves in ceaseless prayer. The Evil One, however, stirred up bad feelings towards the monks among those who fished in the area. They recognized the value of the island's resources and wanted to keep it for them selves and their children. Hoping to force the monks off the island, a fisherman went to live there with his family. They had not been there long when some shining youths appeared to his wife, sternly admonishing her to leave the island at once with the family in order to avoid being punished with a wicked death, because God had appointed the island for the monks alone. The family departed in all haste, and never again did any layman try to settle on Solovki. The monks were left in peace.

Six years went by, and St. Herman was led by God's Providence to return temporarily to the mainland, leaving the elderly Sabbatius in the company of God and His angels. They alone witnessed the spiritual exploits which this holy ascetic pursued in the arduous physical conditions of that northern clime. It was not long, however, before this spirit-filled elder received a revelation that his soul was soon to depart from its earthly tabernacle, and he too, returned to the mainland, anxious to partake of the Holy Mysteries before he died. At the chapel by the river Vyg he met a priestmonk, Abbot Nathaniel, who was visiting the remote area just at that time. The abbot was overjoyed to converse with the renowned elder. He confessed and communed him, and then, hoping for more spiritual pearls, asked St. Sabbatius to wait there at the chapel while he went to give Holy Communion to a sick man some distance away. But when he returned the next day, he found the Saint had reposed.  That morning a traveling merchant had discovered the holy elder in the cell adjoining the chapel, sitting in his klobuk and mantia beside a burning censor. Like the rising clouds of fragrant incense which filled the cell, his soul had departed this earth and ascended to its eternal abode in the heavens. The abbot and the merchant edified one another with what each had heard from the Saint's holy lips, and buried his earthly remains there by the chapel.

St. Herman, meanwhile, had been living by the river Onega. There he was approached by a young monk, Zosimas, who was in search of a spiritual instructor. St. Herman told him about Solovki and they decided to go there together. The night of their arrival Zosima had a vision of a magnificent church in the air; at the same time, the entire area appeared bathed in light.

The two ascetics set to work building cells and planting a garden. St. Herman then took leave for the mainland to replenish supplies. His return to the island was postponed for several months by the onset of winter, and the young Zosima was left alone to endure the spiritual temptations of solitary life, as well as the physical hardships which intensified as food stores were depleted. He strengthened himself with the words of the Psalmist: "Cast thy care upon the Lord and He shall nourish thee" (Ps.54,:23), Once, some strangers brought him a basket of food; they promised to come again, and disappeared.

In the spring St. Herman returned with a fisherman, Mark, who later became a monk. And gradually they were joined by others likewise willing to endure the rigors of monastic life for the sake of eternal blessings. On the site of Zosima's vision they built a church dedicated to the Lord's Transfiguration.

Synaxis of the Saints of Solovki Monastery
When St, Zosimas was appointed abbot of the new community, one of his first undertakings was to have the relics of St. Sabbatius transferred to the island. This was done in 1465, thirty years after the Saint's repose; the relics were found to be incorrupt.

Asking the advice of St. Herman in everything, St. Zosima wisely ruled the growing community until his peaceful repose on April l7, 1478. St. Herman outlived his younger disciple. He died in deep old age in the monastery of St. Anthony the Roman in Novgorod, where he had gone at the behest of his abbot. He is commemorated on July 30 when, five years after his repose, his relics were transferred to Solovki, there to await the general Resurrection together with his co-laborers, Saints Sabbatius and Zosima. Solovki Monastery publishes a book of memoirs of the Solovki prisoners

Solovki Monastery publishes a book of memoirs of the Solovki prisoners
The book, Reminiscences of Solovki Prisoners, was the result of work by a large team of specialists from Russia and abroad—historians, culture experts, linguists, and public workers.