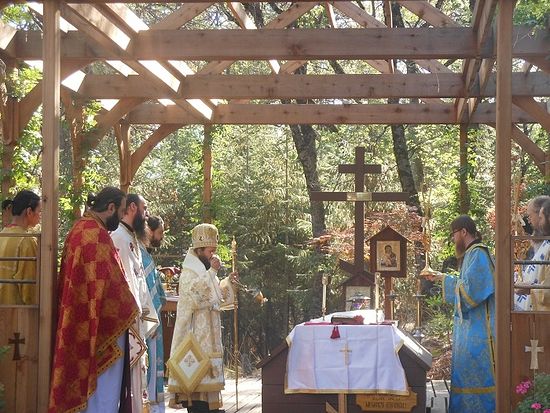 August 20/September 2 marked the thirty-third anniversary of the falling asleep in the Lord of Hieromonk Seraphim Rose of blessed memory. Abbot Damascene and the brotherhood of St. Herman of Alaska Monastery in Platina, CA, of which Fr. Seraphim was the co-founder, celebrated simply this joyous feast of the monastery with several visiting clergy and pilgrims.

On the evening of August 19/September 1 the commemoration began with Vespers in the main church of the monastery, with Metropolitan Saba of the Georgian Apostolic Orthodox Church in North America in attendance along with two Georgian priests, Frs. Evtimi and Arsenie. Fr. Seraphim reposed during the period of the feast of the Dormition of the Mother of God, to whom he was greatly devoted. The brotherhood choir chanted hymns in praise of the Mother of God and her bodily assumption into Heaven, fitting for the celebration of America’s own blessed Seraphim who awaits the bodily resurrection. 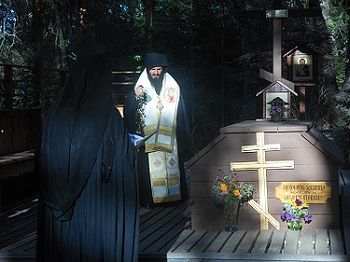 Metropolitan Saba serving the Pannikhida for Fr. Seraphim
Following Vespers the gathered faithful processed up the hill to Fr. Seraphim’s grave at the Entrance of the Theotokos “Skete,” where a Pannikhida was served in his honor in three languages, demonstrating that Fr. Seraphim is indeed, in the words of Hieroschemamonk Ambrose, a “universal saint.” Fr. Damascene and the monastery’s Fr. Paisy served in English, along with Met. Saba serving in Georgian, and Archimandrite Ilarion of the Monastery of the Holy Archangels Gabriel and Michael in Draganac, in Kosovo, Serbia who arrived during the Pannikhida, serving in Serbian.

Following the service Fr. Damascene offered some brief words of welcome to the visiting clergy and pilgrims, and spoke of Fr. Seraphim’s life in terms of “suffering Orthodoxy.” He noted that Fr. Seraphim always sought the truth, suffering for want of it, and when he found the Truth in the Person of Jesus Christ, he suffered in service of Him. “He found that the Truth is discovered in suffering, and in order to go deeper into the Truth you have to suffer for it, and you draw closer to God in pain of heart and you pray to God with pain of heart. This is how you draw closer to Him and this is also how you pray for others” Fr. Damascene stated. He continued, “In this way he was very similar to elders of our times such as Elder Paisios of Mt. Athos and also Elder Porphyrios.”

He also spoke of Fr. Seraphim’s spiritual connection, through suffering, with the Orthodox Christians of the lands that labored under Communism where “the roots of Orthodoxy are deep and ancient,” saying that, “It’s very valuable for us to be gathered together and to experience this unity of faith and experience this spiritual resurrection together gathered around Fr. Seraphim. And we pray and ask his prayers that one day we’ll be gathered with him in the kingdom of Heaven, which was the goal of his life and where he prays for us now.” 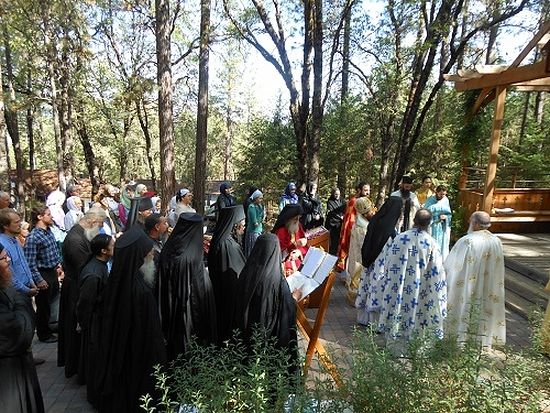 The Divine Liturgy at the grave of Fr. Seraphim

Following the Pannikhida and the evening meal Small Compline and Matins were served in the monastery church. In the morning the services began in the church with Midnight Office and the Hours, after which those gathered again processed to the grave of Fr. Seraphim to celebrate the Divine Liturgy, which was served quietly and beautifully. As main celebrant, Met. Saba, along with Abbot Damascene, was again joined by Frs. Evtimi, Arsenie, Ilarion, and Paisy, as well as Fr. Nektarios Rozadilla of St. George Greek Orthodox Church in Redding, CA, and Fr. Ian Shipley and Dcn. David Greenfield of Sts. Cyril and Methodios Church (OCA) in Chico, CA. The celebrants served again in English, Georgian, and Serbian, with the brotherhood choir responding peacefully in English and Slavonic. Altogether about fifty people were in attendance, many receiving Holy Communion.

Following the Diving Liturgy Met. Saba offered some brief words in honor of Fr. Seraphim, recalling his time as a seminary student in Belgrade when he read the books and articles of Fr. Seraphim in which he “showed us the way to live … and not just Orthodox Christians, but the whole world.” Referring to the ascetic life of the monastery begun by Fr. Seraphim, His Grace concluded, “I cannot say much today, and actually quite the opposite—I have to learn from you how to live as a monk. May the blessing of God be with all of us.”

Following the Divine Liturgy all were served a festive meal while listening to a recounting of several miracles that Fr. Seraphim has worked since his death, including miraculous healings and visitations to those, who like him, were seeking Truth. Following the meal, Archimandrite Ilarion, abbot of the Draganac Monastery in Kosovo, offered some words on his own spiritual connection to Fr. Seraphim. Recalling the Lord’s words that we must become like children to enter into the kingdom of Heaven, Fr. Ilarion noted that he often has such a feeling while serving the Divine Liturgy, and he felt it strongly while serving the Liturgy at Fr. Seraphim’s grave. He recalled that he had a similar feeling when first reading the works of Fr. Seraphim as a monk at Decani Monastery. Having encountered these works of someone from the west, who came from outside Orthodoxy reminding the Orthodox people of their own Tradition, he stated, “I felt a new, refreshing spirit from them.” 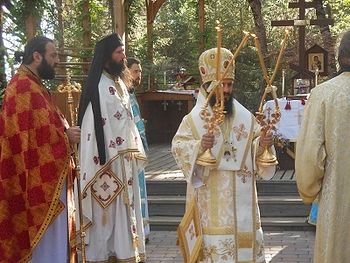 Met. Saba serving the Divine Liturgy
Fr. Ilarion also spoke of St. Prohor of Pchinia whose relics have been myrrh-gushing for ten centuries, whose grave was made known by the deer that would visit it, and while serving the Liturgy he remembered the deer that came to Fr. Seraphim’s grave during his funeral. He concluded by speaking of a yet deeper spiritual connection between the monasteries of St. Prohor and Fr. Seraphim, relating that one of the sisters of the Prohor Pchinski monastery confessed to her abbess that several times Fr. Seraphim made his presence known to her, once visibly appearing to and speaking with her. She told him his monastery is beautiful and he responded that “it is beautiful here too.” Fr. Ilarion noted that this demonstrates how deeply we are all connected in the mystery of the Church.

Fr. Nektarios Rozadilla also spoke, offering some personal memories of Fr. Seraphim as a pilgrim to the monastery in the late 70’s and early 80’s. He recalled that once, as a new Orthodox Christian, he proudly confessed to Fr. Seraphim that he had perfectly kept the Lenten fast, expecting Fr. Seraphim to praise him. He was shocked to instead hear: “Oh, my brother, you have a long way to go!” Continuing, he stated that he is grateful for these words of Fr. Seraphim which have remained with him as a check whenever pride and vainglory appear as a temptation. Fr. Nektarios also noted that he was amazed at Fr. Seraphim’s depth of attentiveness to the services and to prayers. He recalled that in the church that existed in Fr. Seraphim’s time there was often bats flying around, but Fr. Seraphim did not even notice them and was not distracted as were others. Earthly cares were non-existent for him—his mind was always given over to prayer. Fr. Nektarios concluded by highlighting that although most of the pilgrims never knew Fr. Seraphim in his lifetime, they are, in fact, a part of his legacy.

Finally, Martha Nichols spoke briefly about Fr. Seraphim’s funeral, recalling how sad it was, noting that “it took us a long time to regroup after losing our shepherd.” In the spirit of Fr. Seraphim she humbly finished, “Please pray for me. As far as we’ve all come I feel like I’m still so far away from the Heavenly kingdom. And may we all be vouchsafed that kingdom.” "Fr. Seraphim Was a Whole Man, and Therefore He Was a Healed Man"
A Conversation with Fr. Ambrose Young and Mother Theadelphi On Fr. Seraphim Rose

"Fr. Seraphim Was a Whole Man, and Therefore He Was a Healed Man"
A Conversation with Fr. Ambrose Young and Mother Theadelphi On Fr. Seraphim Rose
Jesse Dominick, Fr. Ambrose Young, Mother Theadelphi
"I think he was probably the closest we will ever get to seeing or knowing someone like St. John or St. John of Kronstadt who was also a whole person. I think there are just so few of us in the Church, much less outside of the Church. We’re just very broken and wounded in this culture and in this society. And so it was wonderful to see someone who was healed because he just accepted everything, believed it and did it." For the 30th Anniversary of the Repose of Father Seraphim Rose
Nun Cornelia (Rees)
September 2 of this year marks thirty years since the repose of a righteous man of our time, Hieromonk Seraphim Rose. Father Seraphim’s contribution to the spread and deepening of Orthodoxy not only in America, but throughout the world cannot be overstated. A gifted man from birth, he came to his deep faith in Christ and firm belief in the truth of Orthodoxy through intense struggles of soul and mind—struggles so painfully familiar to people of our age that we cannot but acknowledge the veracity of the conclusions he unwaveringly drew from them. His life edifies even in its imperfection, for truly he was “one of us”: For in that he himself hath suffered being tempted, he is able to succour them that are tempted (Heb. 2:8).
Comments
×