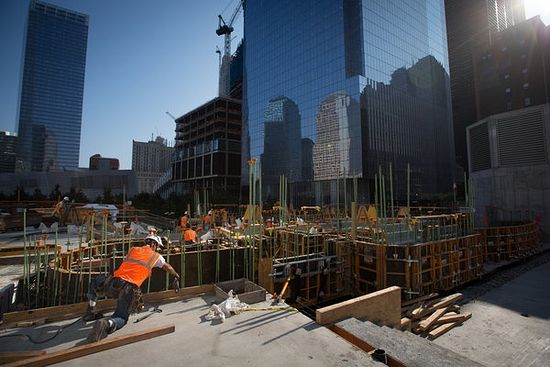 Construction was underway on the St. Nicholas National Shrine at the World Trade Center in Lower Manhattan on Tuesday

What is most amazing about the World Trade Center, 14 years after the terrorist attack, is that it is steadily growing less amazing.

With the removal last year of fences around the National September 11 Memorial, the opening this summer of Greenwich Street to foot traffic and the arrival of office tenants at Tower 1 and Tower 4, the site feels as if it is being knitted back into the fabric of Lower Manhattan. To mix metaphors, it is coursing again with lifeblood.

A landscape that could scarcely have been imagined a decade ago is now a day-to-day reality for thousands of workers who pour into the site each morning.

For those who know the trade center’s history, however, there is something amazing to report: Construction has begun in earnest on the St. Nicholas National Shrine, a Greek Orthodox church and nondenominational bereavement center, designed by Santiago Calatrava, which will overlook the memorial. 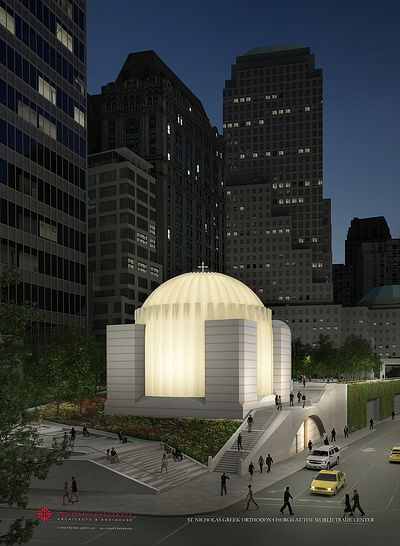 A rendering of the $35 million domed structure, which will glow at night through a veneer of white Pentelic marble, from the same vein in Greece that was quarried to construct the Parthenon.

On Aug. 28, the first concrete was poured. This week, the formwork is in place for the base of the drum-shaped sanctuary. Construction is expected to take two years.

The $35 million domed structure to the south of the memorial will glow at night through a veneer of white Pentelic marble, from the same vein in Greece that was quarried to construct the Parthenon.

What seemed like a simple idea in 2001 — to replace the St. Nicholas Greek Orthodox Church that stood at 155 Cedar Street until it was crushed by the collapse of 2 World Trade Center — became one of the most complex projects in the redevelopment.

Then again, St. Nicholas has a mission different from any other building on the site. 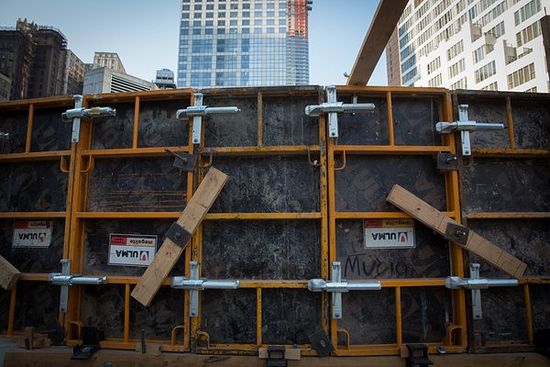 Molding frames at the construction site. On Aug. 28, the first concrete was poured.

“The purpose is to project something that will open a window to eternity,”Archbishop Demetrios, the primate of the Greek Orthodox Church in America, said on Tuesday.

For years, little progress was made as the Greek Orthodox Archdiocese of America and the Port Authority of New York and New Jersey squabbled over how the church would be compensated for giving up the Cedar Street parcel — and the air rights along with it — which the authority needed to build an underground vehicle security center.

Conflicts over the future of St. Nicholas also played out within the Greek Orthodox community. The archbishop said in 2001 that he envisioned the new building as a memorial shrine, not just the parochial church it had been. Members of the small but still active parish felt they were entitled to more control over the project.

Not until 2011 was the path cleared for the plan that is now being realized, under which the church was to be situated at the east end of Liberty Park, a landscaped public space that the Port Authority is constructing on the roof of the vehicle security center. 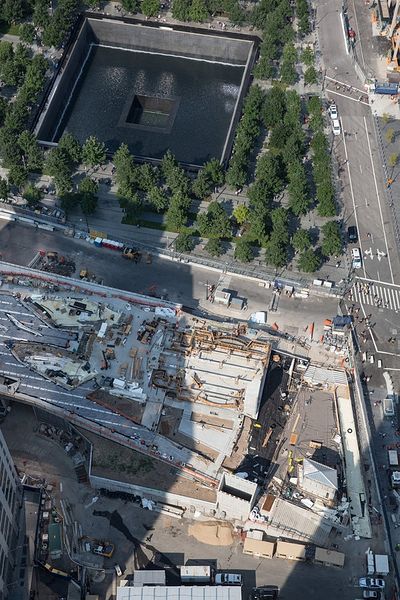 Construction on the shrine, to the south of the National September 11 Memorial, is expected to take two years.


Proposals were invited from 13 architects. Archbishop Demetrios said they were instructed to design a building that would be unmistakably ecclesiastical yet contemporary in design and harmonious with the rest of the new trade center.

Mr. Calatrava was the unanimous choice of the selection committee, the archbishop said, despite the fact that his World Trade Center Transportation Hub was running over budget and behind schedule.

Though the cost of St. Nicholas was estimated at $20 million in 2013, Archbishop Demetrios said, “We know in principle there is no way, even in building a cottage, that you stay within budget.” And this is to be a national shrine of Eastern Christianity. “We have to have a masterpiece of architecture,” the archbishop said. “It has to be the best.”

Mr. Calatrava has “done a lot to assist in keeping the budget down,” said Jerry Dimitriou, the executive director of administration for the archdiocese. 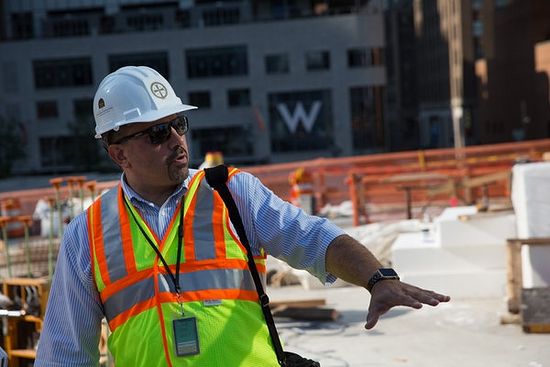 Jerry Dimitriou, the executive director of administration for the Greek Orthodox Archdiocese of America, touring the site.

What attracted the committee, Archbishop Demetrios said, was that Mr. Calatrava had been strongly influenced by Hagia Sophia, the magnificent sixth-century Byzantine basilica in Istanbul that was converted into a mosque and then, in 1935, into a museum.

Fulfilling the requirement of modernity, the principal facade of St. Nicholas, a drum supporting its 48½-foot-diameter dome, will glow softly from within after dark.

The concrete load-bearing walls will be sheathed in a curtain wall of glass panels sandwiching slices of marble so thin — two or three millimeters — that they will be translucent, illuminated by LEDs in the cavity between the concrete and curtain walls.

Because the glass surface will be nonreflective, it will appear in the daytime that the church is sheathed in solid stone, Mr. Dimitriou said, as he led a reporter and a photographer through the concrete outline of St. Nicholas.

“If you can conceptualize it,” he said, “we’re standing at the center of the dome and, looking up, you’ll see the icon of Christ when we’re finished.”