At any Cost. A story 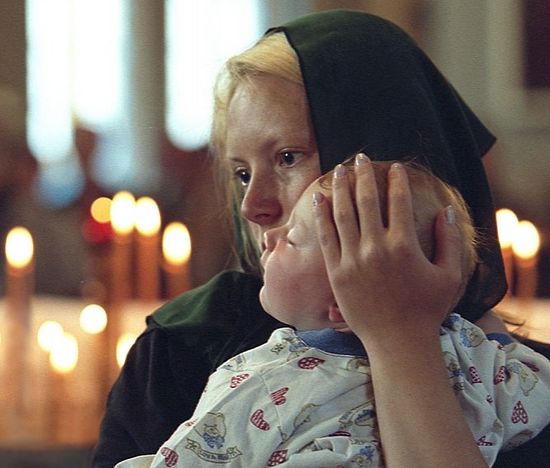 Maria stood, leaning against the church wall and weeping silently. Tears were rolling down her cheeks, she was gasping for air, but she did not let the sobs burst out of her—it was Sunday and the church was packed with parishioners.

The Sunday service had just finished, the priest has greeted the congregation and talked about how one ought to pray. We should pray not only in the days of trials, in difficult times, but in any minute of our life. He also said that we need to remember that not all our petitions can be fulfilled—God knows better what is good to us. And we should accept all that is happening only with gratitude and humility, and implore, relying on the will of God.

And as an example he related a real story from life.

A woman attended all services at one church. She resembled a ghost: thin, always dressed in black, with shadows under her eyes and even marks of beatings. The woman looked emaciated and exhausted. People used to say, “This is how her son is tormenting his mother—he steals her pension money, drinks, brawls, and takes drugs.

Here is that woman’s story: For many years, she had no children. With all her heart the woman asked the Lord to send her a child, and she finally gave birth to a son. She seemed to be the happiest mother in the world. Two years passed, and her son fell ill—the doctors said there was no hope and the baby was expected to die.

The grief-stricken mother stood in prayer day and night, kneeling by icons and imploring the Lord to keep her beloved child alive, “at any cost”. And a miracle occurred: her son got better and better and eventually recovered.

Many years passed. Her son grew up, but did not become a support to her, but turning into a real monster: He was uncontrollable, began to smoke, drink alcohol and take drugs. He did not work anywhere and took his mother’s money for his dissipated life despite all her admonitions.

Nobody knew what this poor woman’s thoughts and prayers were. The parishioners, seeing her physical and mental suffering, involuntarily thought that had the Lord taken her son in infancy, it would have been better.

The moral of this story, related by the priest, is clear: It is good and necessary to ask for health of one’s relatives in prayer to God, to ask for His help in everyday needs. But one should do it fully relying on the God’s Providence, and not merely on our desire to obtain something, “at any cost”…

Maria listened to this story through her silent weeping, and nearly all her life passed quickly before her eyes in that short time. Involuntarily she recognized herself in that woman, but her own story, fortunately, was not so tragic.

Many years before, when Maria was still very young, she learned that she was expecting a second child. And though she then already had one son, Maria (who still did not know any prayers) simply, in her own words, asked God to send her another boy.

Maria had an ultrasound scan (then very uncommon: one had to go to the nearest city to do it) and the doctor pronounced the “verdict”: Maria was expecting a girl. The young woman wept two weeks without stop, not wishing to accept this, though the husband tried to persuade her to calm down and to be reconciled with the situation.

Maria had only the following words in her mind throughout the pregnancy: “I do not want a girl. I want another boy.” And also: “At any cost.” Even when Maria was already in the maternity hospital and the midwife asked her jokingly: “Who will we deliver: a girl?” Maria answered stubbornly: “No, only a boy!”

And a miracle occurred: Maria gave birth to a boy. The mother was happy; it did not even upset her that the baby did not cry right after delivery, that the umbilical cord was wrapped round him three times (and his face looked violet), and the whites of his eyes could not be seen due to hemorrhaging. The mother was madly happy and she was ready to give her life for that little creature in any moment.

As time went on, the children grew, the elder boy was healthy and clever, but the younger one was ailing: he had many diseases, underwent an operation, had poor eyesight and a weak heart. Moreover, he was lazy and displayed no interest in learning. Maria would swoop like an eagle on all those who, as she suspected, intended to hurt her younger son or speak badly of him.

The children were baptized when the younger was one year old. As for Maria, at first unbaptized and a staunch atheist, she agreed to get baptized only at the age of 26, hoping that it would heal her younger child from another disease.

But real problems with the younger son started when he was a teenager. As a school student he began to smoke, to play truant; he was a poor student, often lied and even attempted to run away from home. Because of all this he had a bad relationship with his father.

Maria’s husband, a proponent of strict upbringing, tried to use austere measures, even physical punishment. The mother, in her turn, loved the younger “little one” blindly and to the state of madness, always covered up, shielded and defended him, knowing, however, that it could bring no good. Rows and quarrels began in the family, the father and the son often were not on speaking terms with each other, while the mother was between the devil and the deep blue sea.

After eight years at school the younger son was about to enroll in a college in another town. Maria, not imagining how to survive the separation from him, unexpectedly supported the son—“if only peace could reign in the family again.” She hoped that all would at last become normal.

Nothing good came of this undertaking: freeing himself from the parents’ control, the son continued to live in his own way, much frustrating his mother. He studied badly, smoked, missed lectures and began to drink alcohol with his comrades. The college sent letters warning that he would be expelled for failing exams, truancy and so on. When Maria called him up and asked to come to his senses, he was rude to her, hung up or even did not answer her calls. Now his friends were an authority for him, while his mother’s entreaties to come to senses did not touch his heart. This made Maria suffer a deep distress that only a mother can understand.

Maria withdrew into herself, she could not share her grief with anybody and thus she went into her shell, as if telling herself, “This is my cross.” She did not eat or sleep, cried and was on the verge of a nervous breakdown. The culmination of the situation was the call from the college with requirement to come and take the son—they suspected he had tuberculosis.

It was during these sleepless nights that Maria remembered her earlier petitions to the Lord: “At any cost!” The following thoughts now crept into her soul: “Maybe I am guilty of all what is happening? Maybe this is because of my inability to be grateful to the Lord for all what He is giving us?” The sense of guilt added to her anguish of mind. So many tears were shed by Maria, so many prayers were offered up by her to the Lord, to the Mother of God and all saints—for restoration of health and sobriety for her light-minded son.

Glory be to God for all things! The Lord was extremely merciful to Maria! The terrible diagnosis was not confirmed, and for the son such unpleasant news was a kind of shake-up. He realized to what his thoughtless way of life could have led, he feared that he could have remained alone on the edge of life, without health, education, or buddies. False friends left him at once—and no wonder, with such a diagnosis… And only his mother, as before, was ready to give all that she had for her son.

Glory to God for everything! The son came to his senses; he completed college and entered an institute, remaining in the same town. Two years later he transferred to the correspondence department and tried to find an employment. But he was unsuccessful: whenever he found some job and worked for a while until the beginning of the end-of-term examinations, his employers every time dismissed him, being displeased with his exams. He probably did not have a real zeal for work—it was easier to get money directly from his mother. Nothing changed after graduating from the institute either—the son had no permanent job and that was all. With her last strength Maria supported her son, defending and shielding him from his father.

Maria prayed very hard for her younger son’s work, implored and wept for a long time—but all in vain. She was very upset. This time the Almighty, it seemed, did not listen to her petitions.

But the woman even did not imagine then, how great was the mercy and love of God for her.

Seeing the despondency and miserable situation of the younger brother, Maria’s elder son suggested: “Let him come and live with me! There are more opportunities here, and he will be under my care.” The elder son was serious; he graduated from the school and academy with honors, and at that time he already lived independently and worked in the capital. His suggestion was accepted.

Glory to God for all things! Having moved to the capital, Maria’s younger son found employment, found his sweetheart, steadied, and even gave up smoking. The elder brother became a good example and a role model for him. His relationship with the father returned to normal as well. Seeing radical changes in his son’s behavior, his efforts, the father started supporting him as far as possible. At last the family began to live in peace and harmony.

Two years after his move a war began in the town where Maria’s younger son had lived… If he had not moved, his mother’s heart would have broken.

Maria stood, leaning against the church wall, crying like a little baby who has buried its head in the loving mother’s lap when after a fright receives her support and consolation. Maria was weeping, in her mind falling down before Christ’s feet, and from the bottom of her heart thanked Him for all He had done for her, for His love and patience, for teaching her not to ask for anything “at any cost.” And the woman felt peace and light in her soul. Joy to the World

Joy to the World
Abbot Tryphon
How do we know we are living according to the will of God?