A unique Church services book that was taken to Germany during the Second World War has been returned to the Novgorod State Museum-Reserve in Russia. 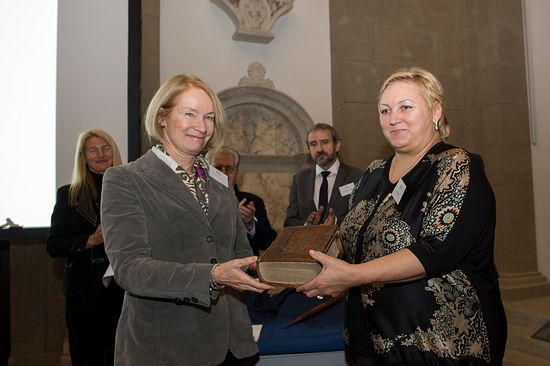 The “Service Book” of 1651, which had been taken by occupying forces, was handed over to Novgorod residents, the museum reported to Interfax on Thursday. The seal on the pages of this rare book indicates that it was taken away precisely from Novgorod.

“The book was handed over in Berlin at the international forum dedicated to the tenth anniversary of the German-Russian museum cooperation. The book was given to Director General of the Novgorod State Museum-Reserve Natalia Grigoryeva by Director of the Berlin State Library Barbara Schneider-Kempf,” the agency’s spokesman said.

At the moment the rare book is at the Russian Federation’s embassy in Germany, from where, after settling of a number of procedural matters, it will be delivered to Moscow and from there to Novgorod. Mother Maria of Paris says “OXI!” to the Nazi Mass Murder Machine
Irene Archos
She prayed for assistance. The idea came to her. By employing the confidence of the local sanitation workers in charge of hauling the garbage from the stadium, Mother Maria perpetrated a plot that would at least save the children from the gas chambers... Veterans from UK visited Sevastopol (+Video)
On October 7, 2015, UK “Arctic sea convoys” veterans Ernest Davis, William Bannerman and Seymour Taylor met with the leaders of the Crimea and Sevastopol along with the Second World War veterans at the Government house of Sevastopol. Brest exhibition highlights Russian Orthodox Church during Great Patriotic War
The exhibition presents the archival documents, photographs which used to belong to Patriarchs Sergius and Alexy I. Many documents have not been published before.
Comments
×