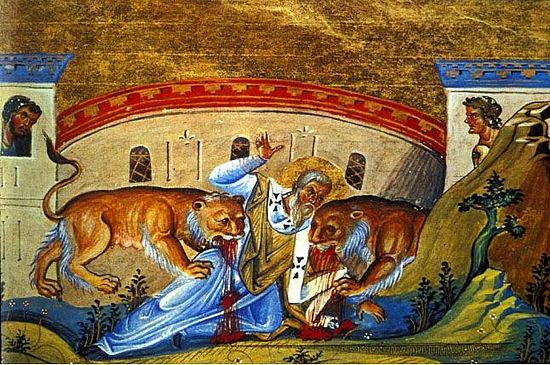 The Hieromartyr Ignatius the God-Bearer, was a disciple of the holy Apostle and Evangelist John the Theologian, as was also St Polycarp, Bishop of Smyrna (February 23). St Ignatius was the second bishop of Antioch, and successor to Bishop Euodius, Apostle of the Seventy (September 7).

Tradition suggests that when St Ignatius was a little boy, the Savior hugged him and said: “Unless you turn and become as little children, you shall not enter into the Kingdom of Heaven” (Mt. 18:3). The saint was called “God-Bearer” (Theophoros), because he bore God in his heart and prayed unceasingly to Him. He also had this name because he was held in the arms of Christ, the incarnate Son of God.

St Ignatius was a disciple of the Apostle John the Theologian, together with St Polycarp of Smyrna. As Bishop of Antioch, St Ignatius was zealous and spared no effort to build up the church of Christ. To him is attributed the practice of antiphonal singing (by two choirs) during church services. He had seen a vision of the angels in heaven alternately singing praises to God, and divided his church choir to follow this example. In the time of persecution he was a source of strength to the souls of his flock, and was eager to suffer for Christ.

In the year 106 the emperor Trajan (98-117), after his victory over the Scythians, ordered everyone to give thanks to the pagan gods, and to put to death any Christians who refused to worship the idols. In the year 107, Trajan happened to pass through Antioch. Here they told him that Bishop Ignatius openly confessed Christ, and taught people to scorn riches, to lead a virtuous life, and preserve their virginity. St Ignatius came voluntarily before the emperor, so as to avert persecution of the Christians in Antioch. St Ignatius rejected the persistent requests of the emperor Trajan to sacrifice to the idols. The emperor then decided to send him to Rome to be thrown to the wild beasts. St Ignatius joyfully accepted the sentence imposed upon him. His readiness for martyrdom was attested to by eyewitnesses, who accompanied St Ignatius from Antioch to Rome.

On the way to Rome, the ship sailed from Seleucia stopped at Smyrna, where St Ignatius met with his friend Bishop Polycarp. Clergy and believers from other cities and towns thronged to see St Ignatius. He exhorted everyone not to fear death and not to grieve for him. In his Epistle to the Roman Christians, he asked them to assist him with their prayers, and to pray that God would strengthen him in his impending martyrdom for Christ: “I seek Him Who died for us; I desire Him Who rose for our salvation... In me, desire has been nailed to the cross, and no flame of material longing is left. Only the living water speaks within me, saying, ‘Hasten to the Father.’”

From Smyrna, St Ignatius went to Troas. Here he heard the happy news of the end of the persecution against Christians in Antioch. From Troas, St Ignatius sailed to Neapolis (in Macedonia) and then to Philippi. 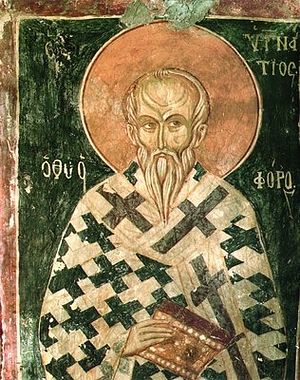 On the way to Rome St Ignatius visited several churches, teaching and guiding the Christians there. He also wrote seven epistles: to the churches of Ephesus, Magnesia, Tralles, Rome, Philadelphia, and Smyrna. He also addressed a letter to St Polycarp, who mentions a collection of the letters of St Ignatius in his letter to the Philippians (Ch. 13). St Irenaeus of Lyons quotes from St Ignatius’s letter to the Romans (AGAINST HERESIES 5:28:4). All these letters have survived to the present day.

The Roman Christians met St Ignatius with great joy and profound sorrow. Some of them hoped to prevent his execution, but St Ignatius implored them not to do this. Kneeling down, he prayed together with the believers for the Church, for love between the brethren, and for an end to the persecution against Christians.

On December 20, the day of a pagan festival, they led St Ignatius into the arena, and he turned to the people: “Men of Rome, you know that I am sentenced to death, not because of any crime, but because of my love for God, by Whose love I am embraced. I long to be with Him, and offer myself to him as a pure loaf, made of fine wheat ground fine by the teeth of wild beasts.”

After this the lions were released and tore him to pieces, leaving only his heart and a few bones. Tradition says that on his way to execution, St Ignatius unceasingly repeated the name of Jesus Christ. When they asked him why he was doing this, St Ignatius answered that this Name was written in his heart, and that he confessed with his lips Him Whom he always carried within. When the saint was devoured by the lions, his heart was not touched. When they cut open the heart, the pagans saw an inscription in gold letters: “Jesus Christ.” After his execution St Ignatius appeared to many of the faithful in their sleep to comfort them, and some saw him at prayer for the city of Rome.

Hearing of the saint’s great courage, Trajan thought well of him and stopped the persecution against the Christians. The relics of St Ignatius were transferred to Antioch (January 29), and on February 1, 637 were returned to Rome and placed in the church of San Clemente.

By sharing in the ways of the Apostles, / you became a successor to their throne. / Through the practice of virtue, you found the way to divine contemplation, O inspired one of God; / by teaching the word of truth without error, you defended the Faith, even to the shedding of your blood. / Hieromartyr Ignatius, entreat Christ God to save our souls.

The stirring celebration of your victorious fight / Is an announcement of the One who is to be born of the Virgin. / In your eagerness to possess Him forever, / You hastened to be devoured by the wild beasts. / Therefore, O glorious Ignatius, you were called the bearer of God!