To help the refugee crisis on the island of Lesvos 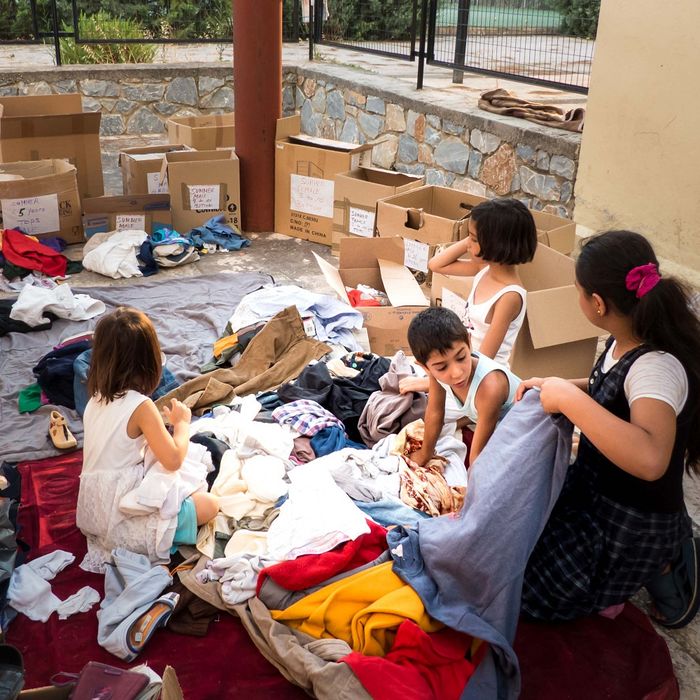 The island of Lesvos has long been a home for refugees, be it Greeks themselves fleeing from Turkey towards the end of the Ottoman Empire, or those fleeing from the more recent Afghanistan and Iraqi wars, but the situation in the last few years and months has grown increasingly demanding and serious. Now the island, the third largest in Greece, sees thousands of refugees arrive every day, fleeing from Muslim violence and wars in the Middle East and Africa. For example, 135,000 refugees arrived to the island just in the month of November in 2015.

Such an influx places a heavy strain on the island and its inhabitants and resources. Refugees are in need of housing, clothing, food, medicine, etc, and there simply are not enough resources and people to help meet the current needs. Papa Stratis, “the priest of the refugees” who founded the charitable NGO Agalia (Embrace) was much loved for his care for the refugees, but passed away in September 2015.

Fr. Christoforos Schuff, founder of the Filoxenos charity and friend of Papa Stratis, has also labored on the island, and you can below watch a recent talk that he gave on the refugee crisis on Lesvos.

Several international NGOs are present and working, and several teams of volunteers are working throughout the island, but they are often too busy to coordinate their efforts, and more help is always needed and appreciated.

Information for donating money or much-needed goods (clothing, food, hygiene products, bedding, etc) or for volunteering on the island (passing out food and clothing, setting up tents, transporting goods, cleaning beaches, etc), as well as information about NGOs and volunteers already helping can be found on the Lesvos Volunteers site.

Also visit the site of the Light House Relief NGO which offers refugee reception, registering, night watch, and environmental clean-up services on the island. Information on donations and personal volunteering can be found on their site as well.

And of course, however else we can help, we can always offer up prayers for the refugees, those left behind in their homelands, the inhabitants of Lesvos, and those struggling to help those in need. Toledo Ohio’s Greek Orthodox Cathedral Ships 25 Boxes of Refugee Relief Supplies to Samos
Inspired by photos of refugees washing up on beaches of Greek islands, and driven by their Orthodox Christian faith, a group from Holy Trinity Greek Orthodox Cathedral in Toledo, Ohio completed a successful campaign to collect and ship 25 large boxes filled with clothing, toiletries, diapers and other items for incoming refugees on the island of Samos. A Christian Response to the Refugees
David Rayahin

A Christian Response to the Refugees
David Rayahin
The state must calculate the risks involved with their actions and the consequences which will result from them in the long-term, however, the individual should be much more concerned with the events of the moment.

"To remain Christians. If we can manage…"
Igumen Daniel (Irbits) on the new “migration of peoples”
Peter Davydov
The arrival of thousands of refugees, migrants and settlers from Africa and Asia to “the Old World” is already being interpreted by many Europeans as a catastrophe, a curse, and a real challenge not only to the culture, economy, and the Christian faith of the continent (which is still alive, though is becoming very weak), but, therefore, to the very existence of the continent and its native inhabitants. What should Europe do not to be afraid?
Comments
×